US officials have signed off a powdered alcohol product called Palcohol, described by its creators as “a great convenience for the person on the go.” 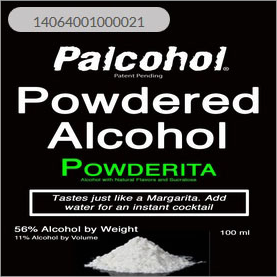 Although brand owner Lipsmark is still working with The Alcohol and Tobacco Tax and Trade Bureau to obtain approval for its labels and the amount of powder in each bag, the company plans to launch its product this autumn in a range of six different flavours.

In addition to “V” and “R”, which are made from vodka and rum respectively, Palcohol will be offered in four cocktail versions: Cosmopolitan, Mojito, Powderita and Lemon Drop.

With an abv of 10-12%, the pocket-sized sachets currently contain one ounce of powder, which its producers recommend mixing with five ounces of liquid to create a serve “equal to a standard mixed drink”.

Lipsmark also suggests that Palcohol can be added to food. According to its website, “We’ve been experimenting with it like adding Powderita powder to guacamole, Cosmopolitan powder on a salad, V in a vodka sauce, etc. It gives the food a kick.”

Controversy surrounding the product’s approval was heightened by the presence of “some humorous and edgy verbiage” on the company’s website, which it has since removed, insisting: “it was not meant to be our final presentation of Palcohol.”

As part of its wider message about using the product responsibly, the brand owners specifically warn customers against snorting Palcohol, warning: “We’ve added volume to the powder so it would take more than a half of a cup of powder to get the equivalent of one drink up your nose. You would feel a lot of pain for very little gain. Just use it the right way.”

Although the Lipsmark currently has a patent pending on Palcohol, Daniel Christopherson a patent specialist with Lehrman Beverage Law, suggested on his company’s blog that “the patentability of Palcohol is very narrow”.

Pointing out that powdered alcohol products are already available in countries including the Netherlands, Japan and Germany, he noted that even in the US a number of patents already exist for this type of product.