Exactly what Colt 45’s legendary spokesperson, Billy Dee WIlliams, meant by “works every time” was left to the imagination. 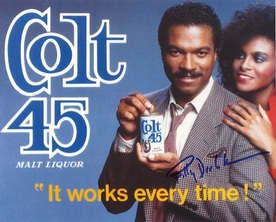 But the “it” responsible was generally taken as a reference to the malt liquor’s higher abv (alcohol by volume) level.

Although all the major brewers offered malt liquors at one time or another, their efforts were more half-hearted. Little was invested in marketing lest cries of “Irresponsible!” arise from pressure groups, regulators, and legislators.

Big Beer’s higher-alcohol retreat opened territory that craft beers ultimately came to occupy. Ask any beer drinker these days to name a higher-alcohol beer, and the answer will almost certainly be a craft brand.

The abv level for most mainstream beers is below 5%. Above that, well, just visit a brewpub and read the chalkboard*. So, what’s Big Beer to do?

At MillerCoors, they call it “innovation,” but it seems to come down pretty much to lacing whatever’s in the bottle with more alcohol. 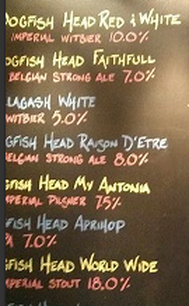 Miller Fortune aims to compete with spirits, even suggesting it be poured into a “rocks glass” as shown here. (Why not a shot glass?) High-alcohol is part of that move. Of the major brewers, Anheuser-Busch Inbev has the lead in pushing up alcohol levels. Although carrying Bud Light Lime branding– Bud Light Lime beer is 4.2% abv– the growing line of “Ritas” delivers nearly double that. At 8.0% abv, alcoholically speaking, Rita apparently hooks up with Mike, whose “Harder Punch” is up there, too. Some of the Fortune ads even get pretty close to selling alcohol-effect, long a no-no for Big Beer. 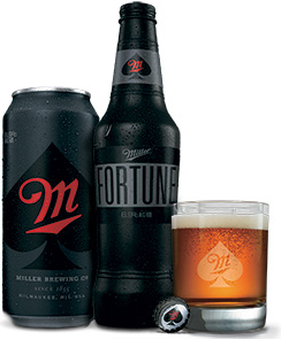 And remember that “innovation guy” at Miller Coors? On stage at the brewer’s just-concluded convention, he posed a question: “What do we need for Redd’s?” (the 5% abv cider launched last year).

Not that long ago, Pabst, the current owner of the Colt 45 brand, may have touched Big Beer’s high-alcohol limit – to say nothing of a lack-of-responsibility limit – with its “Blast:” 12% abv, kids’ candy flavours, and ads so irresponsible, they almost seem to be a parody. Here’s how one alcohol-awareness group showcased it.

* And now in role-reversal fashion, craft brewers are actually heading to lower-alcohol territory with their session beers, generally registering below 5% abv.