A quiet revolution is taking place in Beaujolais. Looking to capitalise on the success of the much-lauded 2009 vintage are a troop of dynamic young winemakers, aged between 25-35, who are re-energising the region with their experimental, forward-thinking approach and determination to make characterful wines with a sense of place.

Not only are they poster boys for the region; they’re an exciting sign of things to come. With their enthusiasm and fearlessness, this new wave of winemakers – spearheaded by the likes of Moulin-à-Vent-based minimum interventionist Richard Rottiers and Julien Sunier, who practises organics across his three one-hectare old vine vineyards in Fleurie, Morgon and Régnié – have the potential to give Beaujolais the much-needed makeover it deserves, and send the region in a very exciting direction.

Move over The Douro Boys, The Beaujolais Boys have arrived.

Read on for a profile of 10 young winemakers to watch and let us know which one’s your favourite in the comments box below. 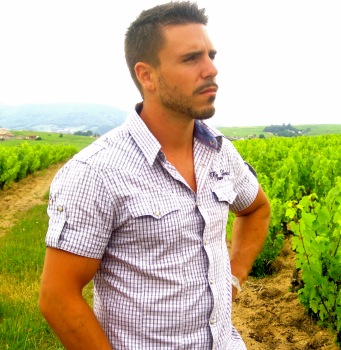 With his poster-boy good looks, Charly Thévenet would look more at home on a catwalk than in a vineyard, but the 28-year-old couldn’t be more serious about wine.

He keeps things simple, producing just one wine – a 100% Gamay from three hectares of 80-year-old vines in Régnié.

The resulting Grain & Granite, which is aged for four years in old Burgundian barriques then bottled unfiltered, has already caught the eye of American wine author and importer Kermit Lynch, who has snapped it up for the US market.

The son of famous “Gang of Four” Morgon producer Jean-Paul Thévenet, Charly, who worked a harvest with Piedmont producer Luigi Pira before a stint with the late “Pope of natural wine” Marcel Lapierre in Morgon, chose Régnié as his canvas because he believes the lesser-known, terroir-driven cru has tremendous potential, the pink granite soils producing aromatic wines with a mineral core that show a good balance between freshness, solid acidity and structure.

“I wanted to do something different and put Régnié on the map,” he says. “It’s an exciting time for Beaujolais. There’s a lot of unity between the younger generation and more of an open door philosophy.” 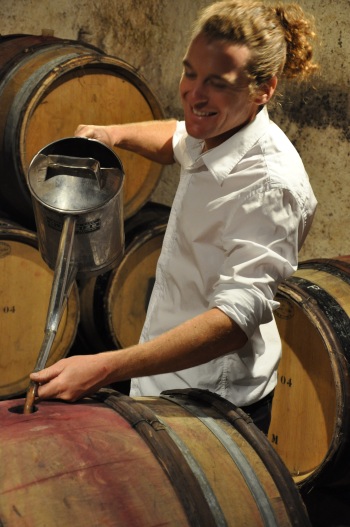 Curly redhead Richard Rottiers took over 3.15-ha of Moulin-á-Vent vineyards aged between 40 and 80 years old in 2007.

Keen to produce wines that reflect its unique terroir, he now owns four hectares in the cru village, where he hopes to be certified organic by 2014.

Rottiers has chalked up vintages all over the world, including Chablis, Gaillac, California, South Africa, New Zealand, Luberon and more locally, Brouilly.

His style of winemaking is traditional, with partial use of CO2 and the use of a soft extraction process.

Rottiers settled in the region after falling in love there and says that through his relationship with local girl Corinne, he has developed a passion for the land and its history. 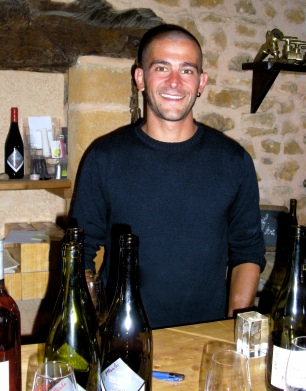 Colin Farrell lookalike Julien Merle is a lone star shining on the periphery of the Beaujolais region.

Taking the reins at his family property eight years ago aged 23, he produces small amounts of old vine natural wine from eight hectares in Légny in the south of the region.

The charismatic 31-year-old is passionate about promoting the quality of southern Beaujolais. “There’s a lot of snobbery towards the south in the north. They think we’re not up to scratch,” he admits.

Merle makes five wines, and is keen to keep production down in order to focus on quality.

His top wine, Cuvée Philibert, is made from old vines and aged for eight months in French oak barriques.

All the wines in his range display bright fruit, freshness and uplifting acidity, proving that southern Beaujolais can compete with the crus in the quality stakes.

Like many of the new generation, Merle is keen to champion natural winemaking – all of his wines are sulphite free and made with indigenous yeasts. “I want to share the taste of my land through my wines,” he says. 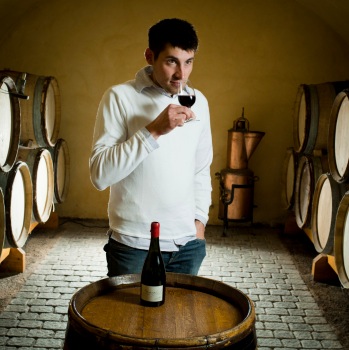 Acquiring two hectares in the Les Charmes climat of Morgon, fresh-faced Aurélien Grillet set up Domaine du Chardon Bleu next to his father’s estate in 2007.

After a two-week maceration period the wines finish their fermentation in tank and are rested during winter then bottled without filtration, sulphur or additives.

The ambitious 25-year-old produces two wines: Les Charmes, made from 55-year-old vines, and his top cuvée, Vieilles Vignes, from 110-year-old vines and low yields of around 10hl/ha, which is aged on fine lees for a year before bottling.

Grillet believes there is “no great wine without respect for the land on which the vine thrives, grows and gives its fruit.”

He sees it as his duty to preserve the land and keep it alive through sustainable practices. 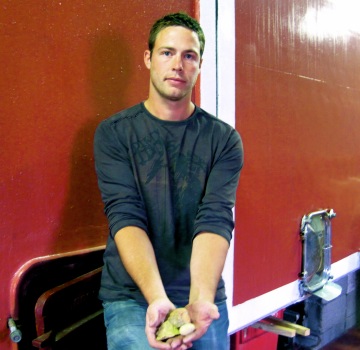 Deciding to break away from his father’s cooperative, Paul-Henri Thillardon makes wines in the Burgundian style from six hectares of old vines in Chénas.

The enterprising 25-year-old negotiated a deal to rent both the vines and the corresponding winery – a renovated space dating back to the 18th century, from a local doctor, whom he part pays in wine.

Having studied winemaking in Hermitage, Thillardon is passionate about making wines of character, which he does through extended maceration.

He is currently experimenting with soil types, including pink granite, schist, granitic and alluvium.

Thillardon’s range comprises four wines, but he’s experimenting with many more, including an as yet unnamed barrel-fermented Viognier.

As with many of the new generation, Thillardon is dedicated to organics and has taken to using horses instead of tractors in the vineyard.

He chose to make wine in Chénas as he believes it to be the cru with the brightest future. “Chénas has extraordinary terroir, the region has incredible potential,” he enthuses. “I want to change Beaujolais’ image. I want to promote the region and show how diverse it can be. I’m proud of my heritage.” 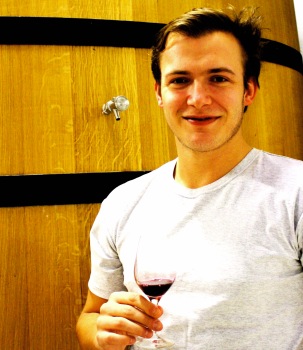 Baby-faced Edouard Parinet is in charge of the development of Château du Moulin-à-Vent, the emblematic domain of the Moulin-à-Vent appellation bought by his father in 2009.

The estate stretches over 30 hectares of vines in the heart of the cru village and its vineyard plots, including Champ de Cour, La Rochelle and Les Vérillats, boast some of the best terroir in the appellation.

Parinet works solely with Gamay, and, thanks to Moulin-à-Vent’s iron-rich soil, the terroir produces Gamay to rival the Pinot Noirs of the Côte de Nuits and Côte de Beaune in neighbouring Burgundy.

Parinet aims to express the nuances of Moulin-à-Vent’s terroir through his wines, with Croix des Vérillats, grown on sandy soil with a high exposure to the sun, and Champ de Cour, made on argilous soil, coming from two unique terroir parcels within the granite-dominant region. 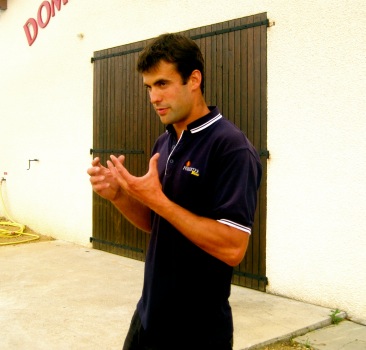 Tall, dark and handsome Mathieu Mélinand is chief winemaker at his family’s 20-hectare pink granate and sand property Domaine des Marrans in Fleurie, which boasts vines up to 120-years-old.

Mélinand is a purist, vinifying each parcel separately for maximum expression.

He also macerates his wines for up to three weeks for higher concentration.

Although the domaine is a Fleurie specialist, with vineyards covering 10 hectares in different climats, it also produces a Morgon, Juliénas, Beaujolais-Villages from the steep slopes of Jullié, Chiroubles from a slope named Les Côtes and a Beaujolais from the south of the region near Saint Jean d’Ardières.

Each wine is matured on fine lees in tank or large wooden vats then bottled at the domaine for six to 10 months. 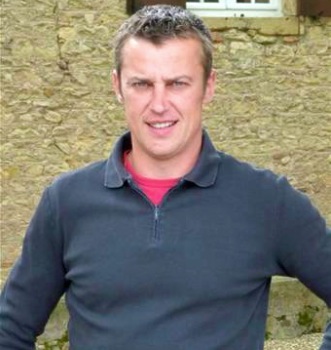 Having been in the hands of the Picard family since 1908, the 35-year-old is on a mission to prove that Gamay need not equal wimpy wines by producing gutsy, structured, barrel-aged, old vine reds from his 33-hectare estate taking in Brouilly and Moulin-à-Vent, where the average vine age is 80-100 years old.

Picard, who started winemaking aged just 22, is also proving his mettle in the white wine arena with a pair of oak-aged Chardonnays.

While all the wines in his extensive range are unique, they have a signature style: big, bold and well structured, with bright black fruit and a savoury core.

Picard, who has worked stints in Germany, the Côte Rôtie, Condrieu and Saint-Joseph, admits making wines with big personality from Gamay can be tough: “It’s a thousand times more difficult to make great Gamay in Beaujolais than great Syrah in Saint-Joseph.”

In this vein, he wants to limit production in order to focus on quality.

His top wine, the 14.75% Moulin-à-Vent “Premium” is produced in miniscule amounts – just 780 bottles last year, which are all numbered and signed. 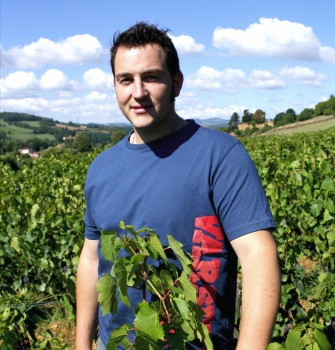 With three years as chief winemaker at his family property, Domaine Chasselay, under his belt, wine alchemist Fabien Chasselay has begun to experiment with a variety of styles, making everything from a nutty white Beaujolais to an 8% abv sparkling Gamay and a 100% Pinot Noir, while his barrel-aged Morgon and Fleurie have been taken on by online organic wine pioneers Vintage Roots.

Having worked stints in Rutherglen, Australia, and Châteauneuf-du-Pape, the daring young winemaker’s latest trick is a sweet wine made from Cognac and partially fermented grape must named La Mistelle d’Améthyste after Bacchus’ girlfriend.

“I like to keep challenging myself,” he says. “A lot of my wines are purely experimental. When I get bored, I invent a new wine.”

At the domaine, where he makes wine from organically certified grapes with his sister Claire, weedkillers have been replaced with infusions of lavender, horsetail, seaweed and nettle.

Despite having a 15-strong range, production remains small at just 5,000 cases a year from 11 hectares across Morgon, Fleurie, Brouilly and Chénas. 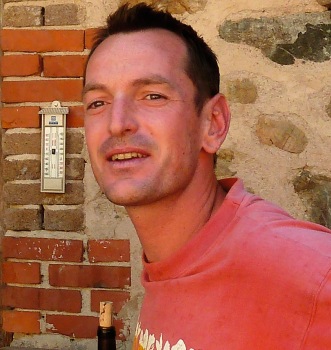 The vineyards are farmed organically and Sunier adopts a natural approach to winemaking using minimal intervention and very little sulphur during bottling.

The green-minded winemaker is passionate about terroir and believes wines should be made for instant enjoyment rather than for laying down for decades.

As well as wine, Sunier also produces top quality saucisson and is in the process of converting his farmhouse into a B&B, which he hopes to open next year.