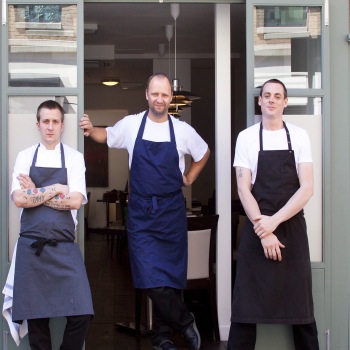 It’s 6.15 on a Tuesday evening and a pair of hungry Americans are already perched in Roganic’s compact, 25-seater space lined with lugubrious abstract expressionist paintings, waiting to be fed.

Spotting Spalding on entry, I corner the charismatic 24-year-old before he disappears downstairs.

Decked out in chef whites, his rolled up sleeves reveal arms heavily inked with tattoos. Musical notes and red and blue jigsaw pieces climb up each limb, alongside the name Tilda (his baby daughter), and the phrase “keep your feet on earth but your head in the clouds,” – “As a chef, you spend so many hours in the kitchen, it’s important to be able to dream a little bit, otherwise you go crazy,” Spalding tells me with a grin.

His speech is fast and furious, his words spat out like bullets. The world it seems, doesn’t move fast enough for him.

While most pop-ups have the lifespan of a dragonfly, Roganic is stretching the definition with a two-year venture. The brainchild of Simon Rogan, of Michelin-starred L’Enclume in Cumbria, Roganic (a hybrid of Rogan and organic), prides itself on locally sourced (preferably foraged), seasonal organic ingredients.

Manning the mothership in Cumbria, Rogan has handed over the reins to the energetic and fiercely creative Spalding.

In the absence of an à la carte, diners can opt for a six- or 10-course tasting menu, with a vegetarian option available in both formats.

The championing of British produce begins as soon as I sit down, when a glass of salmon pink Chapel Down Brut Rosé NV is opened and poured by the restaurant’s affable 23-year-old manager Jonathon Cannon.

Team Roganic is scandalously young and ridiculously clued-up about the minutiae of the courses. With the theatrical arrival of each new dish comes an exhaustive explanation of the origins of every last ingredient.

In front of me lies a solitary black pebble, foraged by Spalding from a beach in Folkstone.

Pondering the philosophical significance of the stone, I become privy to its purpose when a waiter arrives wielding a knife and slathers it in sea salt-flecked, well-whipped butter to be spread on an array of freshly baked spherical bread, including buttermilk, spelt and pumpernickel, all with warm, fluffy interiors. 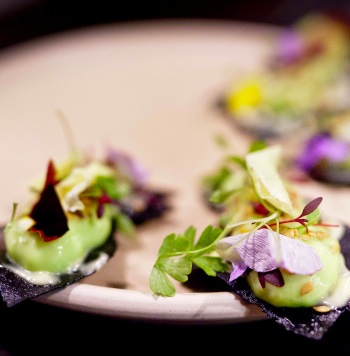 The first step of our edible journey begins with an amuse-bouche of squid ink paper with lind seeds, aioli and cucumber foam, accessorised with an edible purple pansy. It is a thing of beauty, and too pretty to put in my mouth, but when I do I’m rewarded with an explosion of flavour and texture, from the crunchy black paper, to the creamy foam and silky flower.

This is the laying down of the gauntlet; a glimpse of the culinary peacockery Spalding is capable of, which perfectly sets the tone for the dishes ahead.

To describe all 10, (15 if you account for amuse-bouches and palate cleansers), would be to fill a book, so I’ll stick to the highlights.

Our first dish: heirloom tomato, poached lamb tongue and dill custard is as curious as it is delicious.

The playful preoccupation with texture is a thread weaved throughout each course. Multi-layered and deconstructed, the dish is of such complexity, it feels like the culinary equivalent of Inception. 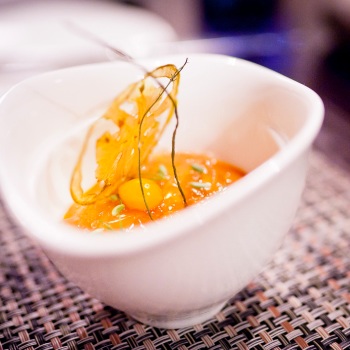 Strangely, the overriding flavour is of the warm, salty gherkins you encounter in a McDonald’s cheeseburger, despite the dish being gherkin free. It’s a very specific and nostalgic taste; the taste of childhood.

Dish three: smoked Cornish ling, arrives dramatically in a Plath-esque bell jar billowing with smoke. Protected by a crab apple shield, the ling is nestled in a bed of crispy onion slithers that lend the ensemble an enticing smoky edge.

Mention must be made of the wine. Throughout the five-hour epic, we are offered seven glasses from any array of regions, including Washington, Santorini, Campania and Wagram.

To my disappointment, my glass remained empty on a number of occasions, our switched-on sommelier Sandia Chang (previously of Per Se) pouring frugal measures rather than full glasses. With a £50 supplement for wine, I was hoping my cup would runneth over.

And we didn’t see red until dish nine – a haunting Alto Adige Lagrein brimming with cherries, rose petals and tealeaves – having been inundated with cool climate whites.

Food is very much the star of the show at Rognic, with wine happy to play a reliable if uninspiring supporting role.

Back to the main event – dish five: pig and smoked eel comprises two square croquettes amid a tweezer-shaped 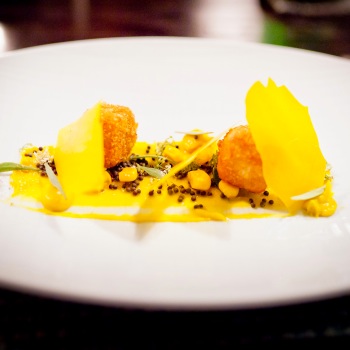 swoosh of canary yellow pickled corn dotted with mustard seeds that detonate gently on the palate.

The sugar cube-shaped squares burst with flavour on biting, displaying the smoky character of Frazzles. Has Spalding been let loose with the monosodium glutamate?

Mixing the forest and the sea in dish six: grilled langoustine, purple sprouting broccoli and loganberry oil, is the only miss of the evening – the subtle flavour of the crustacean overpowered by the sweet berries. But the single strand of broccoli is the best I’ve ever tasted, expertly timed to give it a satisfying crunch.

Meat makes a cameo appearance in dish nine, in the form of a perfectly pink cut of Cumbrian veal cooked in buttermilk. Soft as a pillow, it melts in the mouth.

We are then treated to a septet of British cheeses, lovingly cut by our a walking encyclopedia of a waiter, including the nettle-wrapped Cornish Yarg and intensely tangy Harbourne Blue, enhanced by miniature poached pears.

In preparation for the final furlong; a trio of desserts, our palates are cleansed with a vivifying ginger beer granita.

Soldiering on, we munch our way through the textured trilogy, the highlight being a scoop of frozen natural yoghurt set beneath a dried caramel roof. Completing the homage to childhood flavours, the bilberries recall blackcurrant Fruit Pastilles.

At £80 for 10 courses, with a £50 supplement for wine, Roganic isn’t cheap, but it’s a destination restaurant.

A night in its clutches is as entertaining, awe-inspiring and surprising as a night at the opera.

Dish after dish, Spalding delights with his exquisite presentation, playful flavour combinations and deftly cooked ingredients. To send out hundreds of equally beautiful plates a night is testament to his exacting standards.

These are more than dishes; they’re edible works of art to be deliberated over then devoured. It will be fascinating to see what this wild child does next.