Ernest Hemingway’s final visits to Spain are remembered at a new exhibition in Rioja. 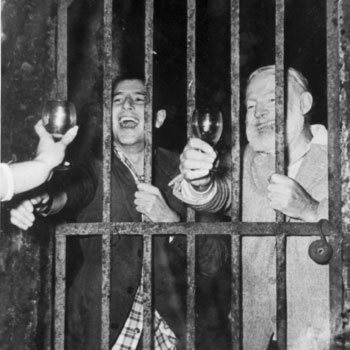 Hosted and created by Bodegas Paternina at its Conde de los Andes winery in Ollauri, the exhibition entitled “Tinta, Sangre y Vino” – “Ink, Blood and Wine” – celebrates the writer’s visit to the winery 55 years ago and marks 50 years since his death.

However, the exhibition does not focus solely on Hemingway’s visit to Paternina in 1956.

Making use of never-before-seen photographs and working with the Hemingway family, Paternina’s exhibition is more of a look at Hemingway’s association with Spain in the final years of his life.

Greater attention is given to his passions for wine in general, bullfighting, writing, fiestas and good company. Carlos Eguizábal, CEO of Paternina, spoke to the drinks business at the opening ceremony in Ollauri.

“We felt the exhibition was appropriate because of his relationship with wine and Rioja in general,” he said.

“There is a connection between wine, culture, bullfighting and literature which Rioja encapsulates and which underpinned his love of Rioja and Paternina. It’s a celebration of his life.”

Hemingway’s daughter-in-law Valerie and grandson John were also at the opening of the exhibition and Valerie told db about the author and his connections with wine.

“He was always looking for what was good,” she said. “Not always the best but what he could enjoy. He didn’t follow trends or labels or vintages but wine was part of the fabric of his life.”

As for his reputation as a heavy drinker (and at worst a drunk), Valerie countered: “He was very disciplined with his drinking and never drank because he ‘needed’ the drink. He would also never write after drinking, saying: ‘Anything you write after drinking is worthless’.”

Much of the exhibition centres on Hemingway’s return to the bullfights between 1956 and 1960.

His visit to Paternina in 1956 coincided with the coming of age of Antonio Ordóñez son of the bullfighter Cayetano Ordóñez also a friend of Hemingway and model for the character Pedro Romero in The Sun also Rises.

Antonio was on a tour of the Basque country and Rioja in 1956 and Hemingway followed his fights in cities such as Bilbao, Pamplona, Haro, Logroño and Calahorra.

It was on this trip that the two of them visited Paternina and a great many of the unseen photographs in the exhibition show the pair being shown around the cellars – and tasting wine.

Hemingway would follow Antonio on subsequent returns to Spain between 1956 and 1960.

These, along with the mano a mano contest between Antonio and his great rival and brother-in-law Luis Miguel Dominguín in 1959, formed the basis of Hemingway’s last series of articles for Life magazine, The Dangerous Summer.

The exhibition runs from Tuesday to Sunday – with more limited opening times on Sunday – until 15 April 2012. Admission with a tasting is €3, €2 for over 65s and under 18s and free for under 14s.