“Unlike so many identical, money-pit launches in this part of town, Mount St. is deserving of both attention and acclaim” appraised the Evening Standard’s Jimi Famurewa, who praised The Audley pub, in which the restaurant is situated, as “a plush sanctum of technically dazzling culinary Victoriana”. 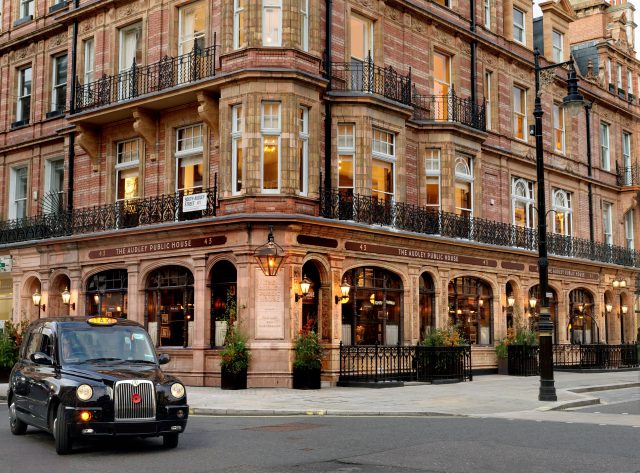 Rising near the original Scott’s and The Connaught five-star hotel, the handsome five-storey building was created by Thomas Verity who envisioned The Pavilion at Lord’s Cricket Ground, The Criterion restaurant and Criterion theatre and five other London playhouses. Today’s interiors are enriched under the auspices of Swiss owner, Artfarm – the hospitality wing of the global Hauser & Wirth gallery. Other properties include The Fife Arms, Braemar, which inspired one of The Audley’s private dining suites, the Scottish room, adorned with a chandelier of found antlers and a well-endowed whisky cabinet, and the recently acquired Groucho Club, Soho, kitchens of which will be nourished by Mark Hix who ran a restaurant in Selfridges when Sainsbury management trainee turned CEO of Hauser & Wirth, Ewan Venters was in charge of the flagship store’s F&B. Internationally, you will also find an Artfarm outpost in Manuela in Los Angeles’ Arts District.

Beneath a vivid ceiling by Newcastle-born Dame Phyllida Barlow in the leather-scented saloon, which also features a carving knife from the 1960s and multiple dangling tankards, or outside at the hand-dowelled, hefty oak picnic tables, guests may snack on pickled eggs, cockle popcorn or a smoked eel and horseradish toast alongside Battersea’s Sambrook’s on tap. Upstairs, via an approach lined with excerpts from a never published artist cookbook, is the Mount St. Restaurant, where dishes of complexity are served on gleaming dinner plates, £50 apiece, by designer Richard Brendon. Here above the “broken floor” by Rashid Johnson are often culinary-themed works by Lucian Freud, Balthus, René Magritte, Henri Matisse, Henry Moore, Pablo Picasso, Man Ray and Andy Warhol. On each table sit weighty and suggestive salt and pepper grinders by Paul McCarthy, their supposed “tree” form previously displayed in colossal inflatable form in Paris’ Place Vendome. While likely intended to affront moneyed art-collecting patrons, here polite staff albeit good-naturedly must work around such ever present erotica. Although hard to blink given the dazzling setting, there is a good view to be had too of the premium streetscape below – George Club, its dining room itself featuring Hockneys, and gunmaker, James Purdey & Sons – best observed from the much-coveted table 12 in the turret. 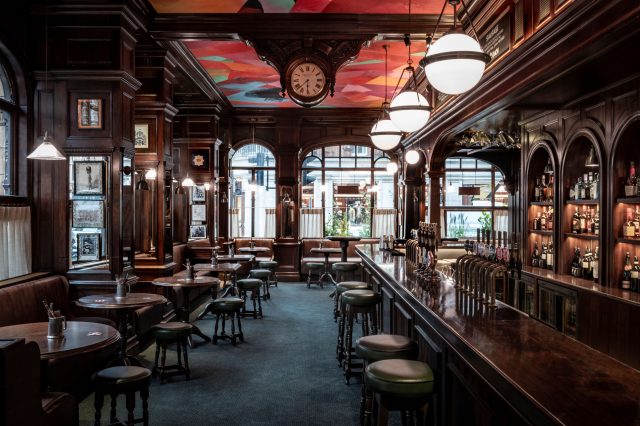 The reassuring and amusing mine host, Ian Reeves, and understated general manager David Nichter, along with head chef, Jamie Shears, himself unswerving in the execution of dishes despite having enjoyed a tequila-pepped staff party the night before at The Barley Mow, all counted 45 Jermyn St. on their CVs. That hugely enjoyable restaurant, known for its caviar and flambé trolleys, alcoholic sundaes, curious cocktails including the eponymous mezcal seasoned “Jekyll & Blyde”, and wine list of big bottles by Nichter was informed by Ewan Venters, the former CEO of Fortnum & Mason in which it was situated. As the first global CEO of Hauser & Wirth today, Venters is able to further display his nous for hospitality and legendary ability to court and courteously coalesce celebrities of stage and screen, the art cognoscenti and royalty. His knowledge of culinary minutiae is deep, this reviewer recollecting Venters’ detailed response to points concerning an indignant salmon smoker some years ago.

The wine programme throughout is the work of Polish-born head sommelier, Agnieszka Swiecka, previously of Chelsea staple, The Five Fields, named after the “five fields” which bisected the once pastoral setting, and prior to that, Pollen Street Social alongside the then head of wine, the deeply hard-working Laure Patry. As at The Five Fields, menus star produce from the restaurant’s own holdings, being for here, Durslade Farm, Somerset. The overarching group sommelier for Artfarm meanwhile is Robert Lorigan, an Australia-raised former filmmaker, who swapped London, where he rose to become group trainer for the Hawksmoor collection, for “the adventure” of moving north of the border to Aberdeenshire. “Compared to Crouch End, I admire the raw beauty of nature here,” he once said.

With half a dozen Killough oysters from Ireland, farmed by a Frenchman, Swiecka poured the rich, smoky, dry and citrussy, Hungarian oak aged Furmint from Vega Sicilia’s Oremus in Tokaj, in Jancis Robinson/Richard Brendon stemware, which amplified, she said, the nature of its “volcanic soils”. Despite the wine’s big frame, the freshness of the oysters remained extant. 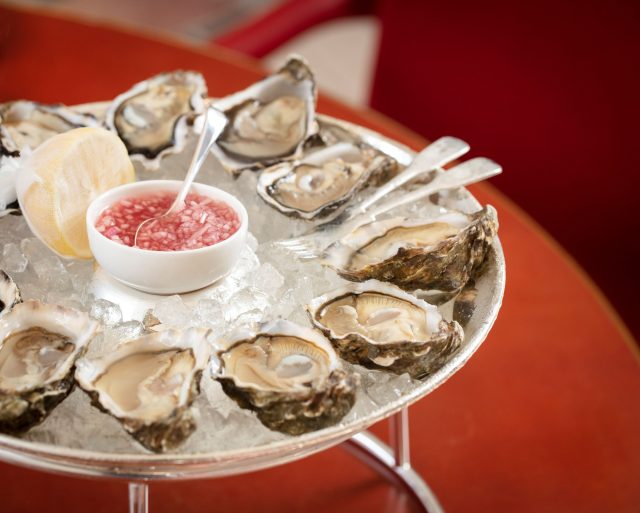 Next, with a neat, juicy, subtly spiced steak tartare of Durslade beef and slim but strong herby toast brushed with aged beef fat, Swiecka chose the notably young yet giving Puligny Montrachet from her “favourite” Carillon sibling, Jacques which worked with the hand-sliced tender flesh.

The main course, served perfectly pink, being “Pigeons in Pimlico” was a kind of Wellington, accompanied by a side of “bubble & squeak” turned into big, crisp, wonderful chips, served with a heatwave Barolo by Diego Conterno which wears a playful sketch of stick figures pouring wine from a height as its label. This is one of an increasing selection of artistic labels chosen by Swiecka, along with Leeuwin Estate Art Series and the Mouton Rothschild from 2004 featuring the work of regular guest, HM King Charles III, whose watercolour label of pines marks the centenary of the entente cordiale betwixt Britain and France. 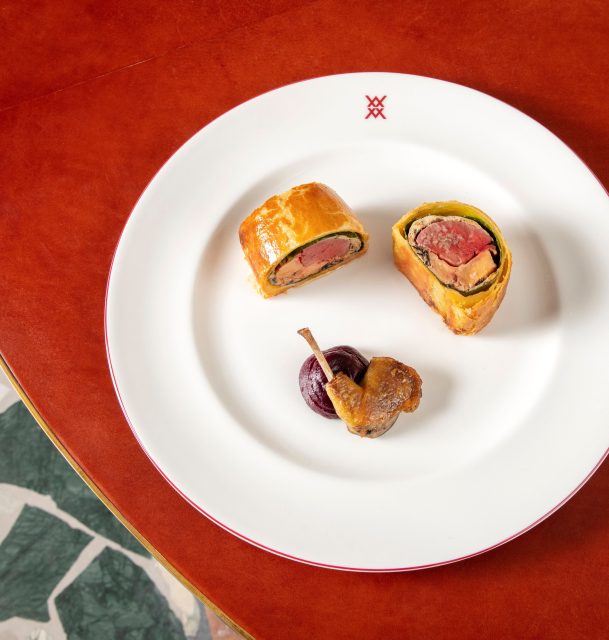 As at The Five Fields, Swiecka’s goal to raise the profile of sweet pours, evidenced by the “meditation wine”, Ben Ryé Passito di Pantelleria which, with its marzipan nuances and 194g/l of residual sugar, accompanied a layered blood orange blancmange with olive oil sable and white chocolate ice.

Other notable wines on the largely French list of approximately 185 vintages, include Sandhi Chardonnay from Santa Barbara County by Rajat Parr, Domaine Anne Gros Clos de Vougeot Le Grand Maupertui, and the Swiss Pinot Noir from Thomas Studach. It is worth noting, despite punchy prices, that every table during our January lunchtime, three months on from the opening, was occupied by wine drinkers. This bodes well for Swiecka to be able to bolster her current list of liquid assets with additional producers, territories and back vintages equally worthy of the magical setting to make this dining room a destination for oenophiles who consider wine as art.