Last week the French newspaper Le Monde highlighted the campaign by a collective of 125 wine growers in Champagne who are calling for the commitment on a total ban in the use of chemical herbicides in the Champagne vineyards by 2025 to be honoured. Giles Fallowfield, db’s Champagne Correspondent, reports. 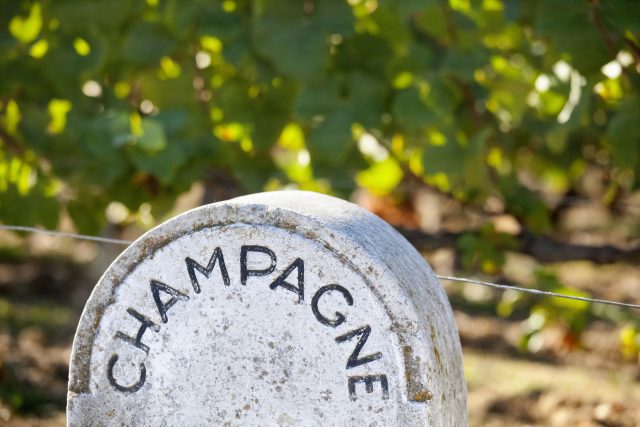 The StopHerbicideEnChampagne collective say there has been U-turn on introducing this ban, which they say was promised at the General Assembly of the Association Viticole Champenoise (AVC) four years ago by the joint presidents of the Champagne Comité at that time, Maxime Toubart, President of the main growers’ union the Syndicat General des Vignerons de la Champagne (SGV) and Jean-Marie Barillère who was then still the Union des Maisons de Champagne (UMC) President (see their comments at the time below).

This controversy has blown up as a result of Toubart’s efforts to clarify the position on herbicide use at the recent General Assembly of the AVC held last Thursday (8 December), although he had already outlined the position of the SGV at its annual meeting back in April 2022 when he said: “Zero herbicides in 2025 is a course that we have set together and not an obligation planned in the long term in the ‘specifications’. To stay on course, we must remain proactive and pragmatic. There is not one, but several good ways in which can move towards this result and better respect the environment.”

Toubart told last week’s AVC Assembly: “I remember very well the speech I gave to this Assembly in 2018 with Barillère when we set the objectives for the sector of moving towards the banning of chemical herbicides by 2025 and reaching 100% of farms certified [Sustainable Viticulture in Champagne (VDC) of something similar] by 2030.” But he says: “These were strong objectives to trigger a qualitative and collective movement and not an obligation that would put many farms in difficulty.”

Toubart is concerned that by integrating the herbicide ban into the Cahier des charges de l’appellation d’origine contrôlée (the rules that govern the production of champagne) and thus making is compulsory for all grape growers, some may be excluded from the appellation. He distinguishes between those that do not want to respect the regulation, who he has no problem excluding – “although I prefer to convince rather than constrain” and those who cannot follow because of what he calls “technical or financial constraints”.

Technical constraints involve those farming plots of vineyard where the slope is very steep and there may be risk of landslides and it is therefore hard to work the soil. And the Comité says they have not found a solution as to how such plots may be worked without some use of herbicides.

While making any changes to the rules in the production of champagne – ie the Cahier des charges de l’appellation d’origine contrôlée — is still the sole perogative of the SGV as it is the Organization for Defense and Management (ODG) responsible for such rules and any changes made to them, the other half of the Champagne Comité representing the houses, the UMC is also involved in such discussions.

For his part, the current UMC president David Chatillon down plays the controversy saying: “First of all there is a misunderstanding about 2018 commitments. In 2018, both Jean-Marie Barillère and Maxime Toubart said it was an objective to reach zero herbicides in 2025, not that they intended to include it in the Cahier des Charges of the appellation. Our objective to reach zero herbicide use in 2025 has not changed. Maxime and I confirmed this commitment last week in front of our growers and the houses gathered [at the AVC General Assembly].

“However, there is a need for pragmatism on those subjects. We know this is a very ambitious objective and so far we have no solution for some plots which are very steep and may be vulnerable to landslides where working the soil is not possible. That said, we have already reduced the use of herbicides by 80% and we are not giving up on the commitment. We have not changed our strategy, which has proven efficiency, we want to convince the collectivity of Champenois instead of coercing.

Chatillon continues: “Since the beginning of the 80s, Champagne has made consistent progress. The global sustainable development programme from 2001 is only one of many examples. We have developed a plan to protect water, for example now 100% of effluents are processed for recycling. There’s a plan to reduce our greenhouse gas emissions, down 20% per bottle between 2003 and 2018, while we are also developing biodiversity with the plantation of trees, hedges and cover crops to avoid erosion, host insects and keep the properties of soil. And we aim to have 100% of the Champagne vineyard environmentally certified by 2030 with 63% of the vineyard already certified.

“We are conscious there is more to do and that is why we have launched an new ambitious plan to reinforce our sustainable development, with a core objective of driving Champagne towards net zero carbon by 2050,” he concludes.

For the record, addressing the AVC General Assembly four years earlier in 2018, Barrilère said on the subject of banning herbicides: “There are only two possible outcomes, either we move forward, or we wait to be forced to move forward with all the risks that entails in ecological terms. In terms of image and therefore, in economic terms for our sector and our companies. I prefer to trace the road of a virtuous Champagne, rather than to live on the past.” At the same time Toubart had added: “The objective is to be able, in a few years, to be able to speak of a 100% sustainable, committed and exemplary Champagne, and to be able to display Zero weedkiller.”