Japanese brewing giant Asahi has announced the launch of its first alcohol-free beer, Asahi Super Dry 0.0%, in the UK, with more key markets, including the United States, to follow. 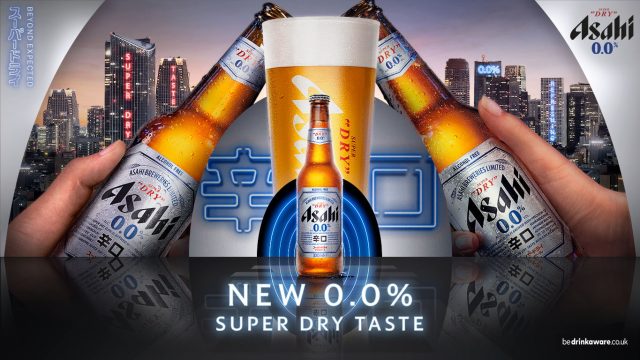 Asahi Super Dry 0.0% comes as part of the brewer’s wider pledge for 20% of its product range to have alcohol-free alternatives by 2030.

The alcohol-free beer comes in convenient 4-pack 330ml cans and a larger 24-pack case of 330ml cans and will launch first in the UK and Ireland from January 2023. The beer will then be launched into Australia, New Zealand, United States, Canada, and France from March 2023.

Asahi’s own research found that some 43% of drinkers said they were looking to moderate their consumption, while looking for alcohol-free and low-alcohol drinking options that do not compromise on flavour.

A global marketing campaign will support the launch of Asahi Super Dry 0.0%.

Asahi has bolstered its visibility in several key sports markets over the last few years, not least through its partnership with City Football Group – which includes Manchester City Football Club. It is also the beer sponsor for Rugby World Cup 2023.

Sam Rhodes, Marketing Director, Asahi UK, commented: “The world of beer is changing. With 53% of consumers trialling new no and low alcohol brands this year, we know UK beer lovers are seeking high quality beers that can be enjoyed in and out of the home without compromising refreshment, and taste.  Asahi Super Dry 0.0% is crafted to match the flavour profile of its original signature super dry taste, offering expanded choice and options for moderation. Based on extensive research and trialling, we’re confident this will become a highly attractive, premium 0.0% beer of choice for all occasions.”