This years Barolo en primeur, which takes place next week, is being boosted by the addition of more than 70 producers from the region, who are donating around 1,500 bottles of top Barolo and Barbaresco to the charity auction. 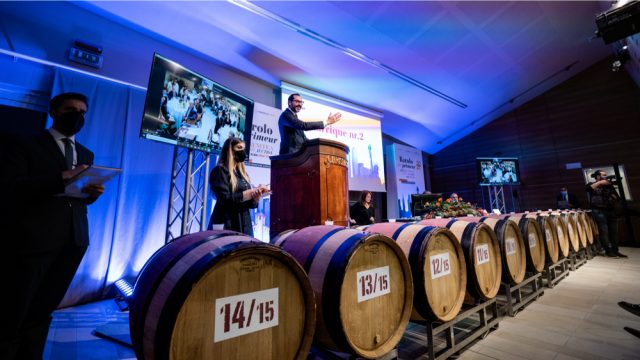 The sale this year sees more than 70 member producers of the Consortium of Protection of Barolo Barbaresco Alba Langhe and Dogliani join the auction in addition to 14 barriques made from grapes grown Gustava vineyard of Grinzan and vinified by  oenologist Donato Lanati.

The Municipality of Production, as the group of producers has been named, will put forward 10 ‘municipal’ lots comprising a total of 1,200 bottles of Barolo and Barbaresco. Estimates ranged from €2,000 for a lot of 36 assorted bottles and six jeroboams of Barbaresco, to  €18,000 for 192 bottles, 37 magnums and seven jeroboams of Barolo. The proceeds from the sale of the municipal lots will be donated entirely to the Oenological School of Alba.

The inaugural Barolo en primeur took place in November last year, 2021, after the sale was established  as a charity by the Cassa di Risparmio di Cuneo Foundation, in conjunction with the CRC Donare Foundation and the Consortium of Protection of Barolo Barbaresco Alba Langhe and Doglian. The first sale, which comprised 14 barrels of the 2020 vintage, raised over €600,000 for 17 national and international charity projects. Once the wine finishes its obligatory ageing in 2025, it will be bottled yielding around 300 bottles per barrique.

This year’s charity auction will follow a similar format to last year, where it was conducted by  Christie’s auction house and live-streamed from the Grinzane Castle in Piedmont, Italy, with wine critic Antonio Galloni providing live-streamed tasting notes on each lot from New York. The barriques have an estimate of  €30,000 each, with a 15th barrique being auctioned later, on 13 November at the Castle during the International Alba White Truffle Auction, with proceeds going to international charity Mother’s Choice, which helps orphaned children and women in need.

As reported by db in June, the 2021 vintage turned out to be “perfect… and spectacular crop” that had not been anticipated due to heavy hail storms during the early summer and the strong drought later on, according to  Matteo Ascheri, President of the Consorzio di Tutela Barolo, Barbaresco Alba e Dogliani.

Reporting on the 2021 vintage for the drinks business in June, Italian expert Filippo Bartolotto noted that the recent Barolos vintages were showing “much more definition and an easier-to-understand style even during their earlier stages”, in part due to the the  warmer climate, meaning riper, more consistent fruit, as well as “the immense growth the Langhe region has undergone in the last 20 years”. This has seen the nebbiolo variety being looked after “better in the vineyards and handled much more softly during fermentation”, he said.

Whether the current charity events will morph into an official Barolo En Primeur in 2024 remains to be seen – Ascheri told the drinks business in June that it was “a bit too early for that, but…”

Barolo en primeur auction: first impressions on the wines from 2021