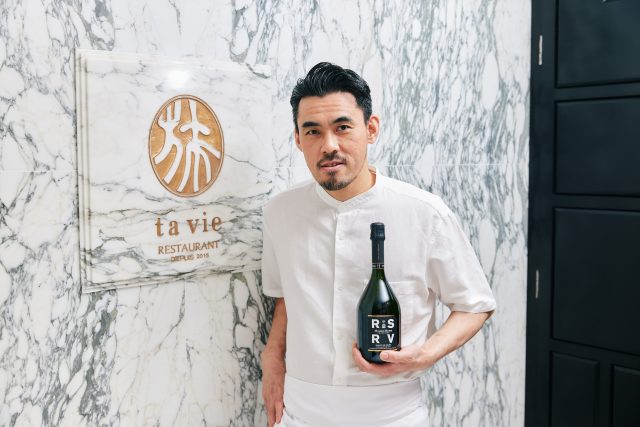 This summer, Ta Vie will present an eight-course tasting menu in collaboration with RSRV Champagne, throughout the month of August.

The connection between the two actually goes back 15 years when Chef Sato made his first visit to Maison Mumm Cellars in France. Attracted by the well-balanced profile of the Champagne and its then limited quantity, he says it is “destiny that has brought them back together”.

Upholding a mantra of “pure, simple and seasonal”, Sato is known for integrating Japanese culinary philosophy into French cooking techniques. The first pairing menu between Ta Vie and RSRV, which kick-starts their collaboration, will be available throughout August.

Described as Maison Mumm’s “best kept secret”, RSRV is a reference to the mark used by Cellar Masters to select and identify the best wines, used only from Grands Crus, during harvest and bottle ageing. It stands for ‘ReSeRVed’ and the Champagne is a limited release, originally enjoyed by a small circle of Maison Mumm’s close friends.