Bugatti and Champagne Carbon unveil the US$290 EB.03 Edition 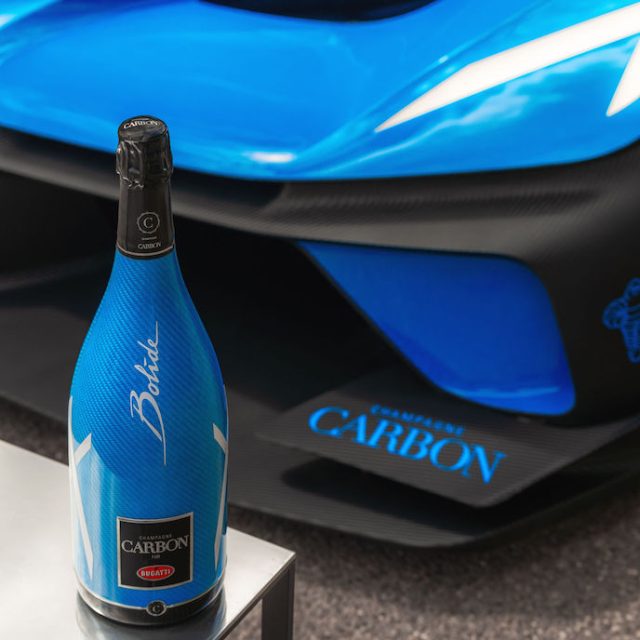 The release, which is the latest result of the partnership between Bugatti and Champagne Carbon, has been inspired by the Bugatti Bolide – known for its distinctive carbon-fibre body and two-tone finish.

The EB.03 Edition showcases the car’s trademark blue and black colourway and also includes the Bolide’s ‘X’ logo on both the right and left side of the bottle.

Bugatti’s The Bolide was created with an emphasis on lightweight construction – a design where everything was to be optimised and nothing superfluous. The Bolide also has a distinctive blue and black finish and a proportion of bare carbon fibre that is greater than in other Bugatti cars to reflect its “purity”.

Alexandre Mea, CEO at Champagne Carbon said: “Champagne Carbon EB.03 is a breathtaking technical accomplishment. For the first time we have managed to combine two colours of fibre in one bottle. The black fibre base perfectly contrasts the main body of the bottle, an intense sky blue. On the Champagne side, this 2013 vintage brings with it initial scents of citrus, followed by aromas of spring flowers. Then a growing intensity toward yellow citrus, toasty notes and aromatic herbs.”

The partnership initially launched Champagne EB.01 as a celebration of Bugatti’s 110th anniversary and was followed by the EB.02 to mark the anniversary of the Chiron Super Sport 300+ breaking the 300 mph barrier.

Each bottle of EB.03, is set to retail for US$290 and will be available online from Champagne Carbon.