F1 champion Jenson Button is on a mission to boost the reputation of blended whiskies with new premium venture Coachbuilt. He talks to Sarah Neish about designing bespoke cars, and drinking cask-strength spirits at 6am. 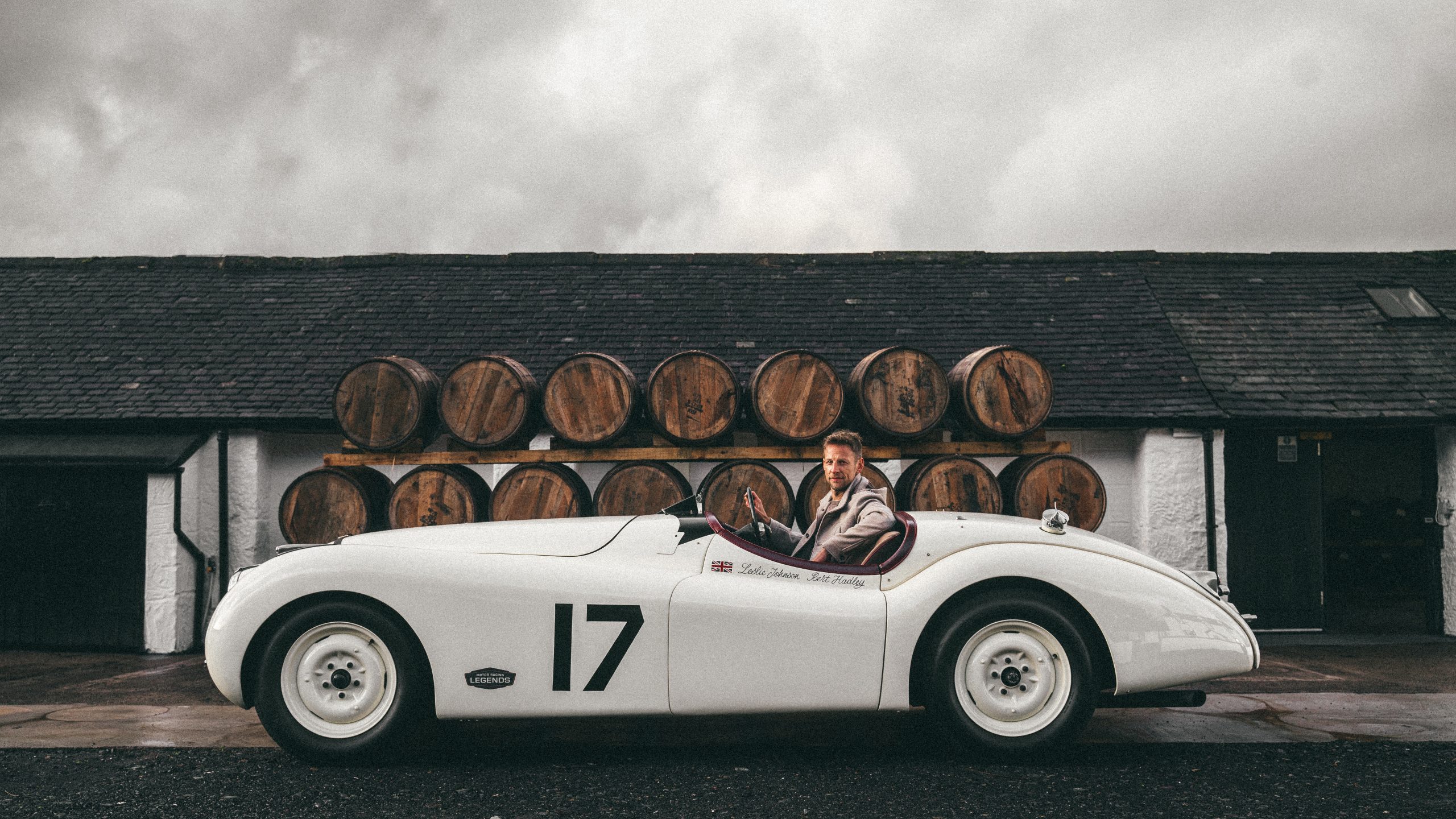 One might assume that after having steered a howling McLaren MP4-26 around a rain-lashed race track at speeds in excess of 200mph, few things would fire up the adrenaline in quite the same way again. Not so with Jenson Button.

The former Formula 1 driver lobs the word ‘exciting’ into conversation liberally, but not in a clichéd, PR-speak sort of way. The 42-year-old has a genuinely electric energy for the projects he’s involved in, which is presumably one of the reasons why BBC Sport’s Andrew Benson once described him as being “a marketing person’s dream”.

“The way I see it is that if I’m not enjoying myself most of the time, then what’s the point?” Button asks.

It’s to this end that he teamed up with whisky maker George Koutsakis two years ago to create Coachbuilt, a whisky blended from five Scottish regions: Islay, Speyside, Campbeltown, Highlands, and Lowlands. Having been sponsored by Johnnie Walker during his F1 days, Button was no stranger to the world of whisky, but is quick to profess that he’s “no expert”. Thankfully, Koutsakis, who previously worked for Whisk-e, one of Japan’s biggest Scotch importers, and who until 2020 led the whisky and spirits division for renowned auction house Spink & Son, most certainly is.

What Button does remarkably well, however, is build things. Cars, brands, campaigns, you name it. The recipient of an honorary engineering degree from The University of Bath, not to mention an MBE for services to motor sports, he has an uncanny knack for visualising something and making it happen. With Coachbuilt, especially, he was determined to lend his ideas to everything from the whisky’s bottle design and product price to its on-trade partners, while Koutsakis kept a hawk’s eye on the blending process.

“George and I met through a mutual friend, and he was talking about how whisky blending has taken off massively in Japan, but has still not blown up in Scotland in terms of really good quality blends,” Button tells the drinks business. “I’d just started a luxury coachbuilding company called Radford, where we work with manufacturers all over the world to develop bespoke automobiles. I said to George that it felt similar to the blending world, where you bring lots of great different components together to make one fabulous whisky.”

The pair hit it off, and from there Koutsakis invited Button to front his blending project as brand ambassador, with one of his earliest contributions being the whisky’s name.

Koutsakis, who had recently slammed UFC star Conor McGregor’s Proper No. 12 Whiskey in a searing critique for the South China Morning Post, suggesting consumers might be better off drinking Jameson instead, was not about to release a sub-par, celebrity-endorsed drop. Similarly, Button had no interest in simply attaching his name to the project “and just hoping to sell a few bottles”. Instead, the duo set about creating a road-safe brand with a premium blended whisky at its heart. The full-bodied expression, which has well-balanced notes of summer fruits and subtle spice, followed by toffee, chocolate and citrus, with a hint of smoke on the finish, launched on 23 March via the brand’s website coachbuiltwhisky.com. 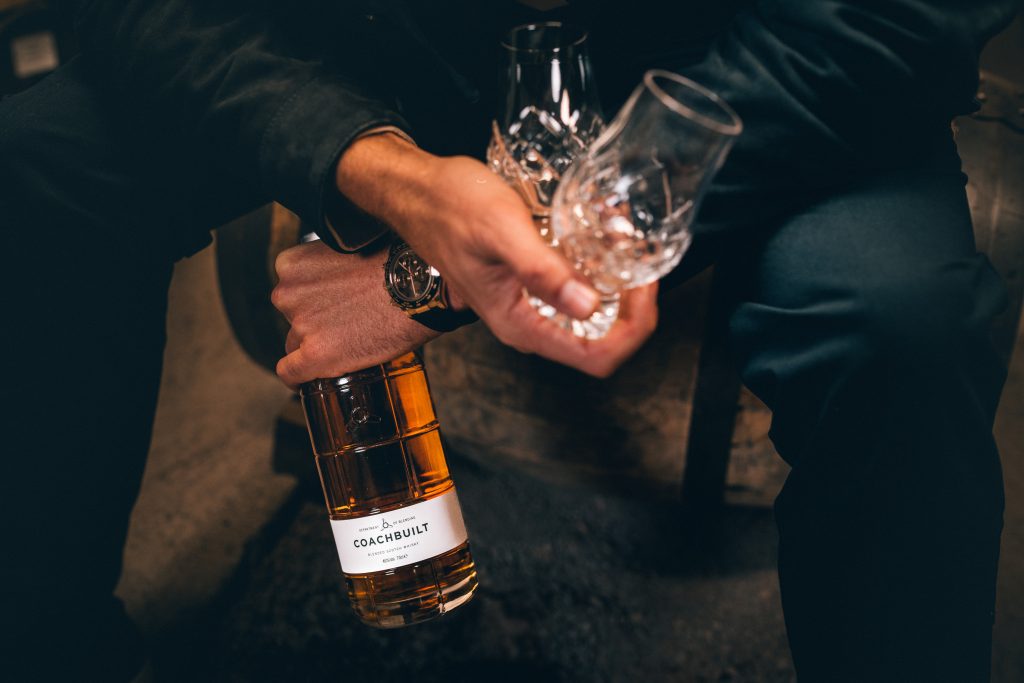 The blended whisky’s packaging is almost as smooth as the liquid inside it, and features discreet nods to Button’s favourite obsession: classic racing cars from the 1950s. Part of Coachbuilt’s logo is a ‘spinner’, or wheel nut, once used by pit crews to manually tighten wheels before the days of whirlwind tyre changes accompanied by the furious buzz of a pneumatic gun.

“There are lots of little parts of the branding that if people know about cars, they’ll recognise,” says Button, who was there to see the first bottle come off the line at Claxton’s Spirits. The independent bottler, based in Dumfries, is a long-time partner of Koutsakis, and came on board to oversee the physical aspects of the blending, shipping samples out weekly to Koutsakis’ home in Taiwan for him to taste and give notes on.

Finished in ex-Sherry casks for six to nine months, the final expression has a layer of warming complexity that few would expect from a blended product. “I think a good Sherry finish can transform a whisky and help to round it out,” Koutsakis says.

As ever, Button was not content with idling in the passenger seat when it came to sampling, and so found himself buckling up for dawn Zoom tastings. “We did a lot of Zooms, which was always fun because George was in Taiwan, I was in LA, and a few of the Coachbuilt team were in the UK. It meant I was often tasting the whisky at 6am. I was having to say to my wife: ‘Darling, I think you’re going to have to take the kids to school today!’,”Button says.

The creative process wasn’t all plain sailing, with occasional head butts between the two founders over the finer details and some grappling over price in particular, before the final RRP of £42 was decided upon.

“Honestly, I didn’t want to increase the price due to Jenson’s involvement and the prestige that brings with it,” Koutsakis reveals. “I believe in making whisky more accessible, and if we have the means to do that, then why not?”

As Button saw it, the brand ran the risk of undercutting itself, with the quality of the liquid deserving of recognition through its retail price: “George started getting upset with me because every time I tasted the whisky I was saying: ‘This is priced way too cheap’,” Button confesses. “But in the end we agreed that we wanted as many people to taste Coachbuilt as possible, to help get the word out that a blended whisky can be a luxury product.” 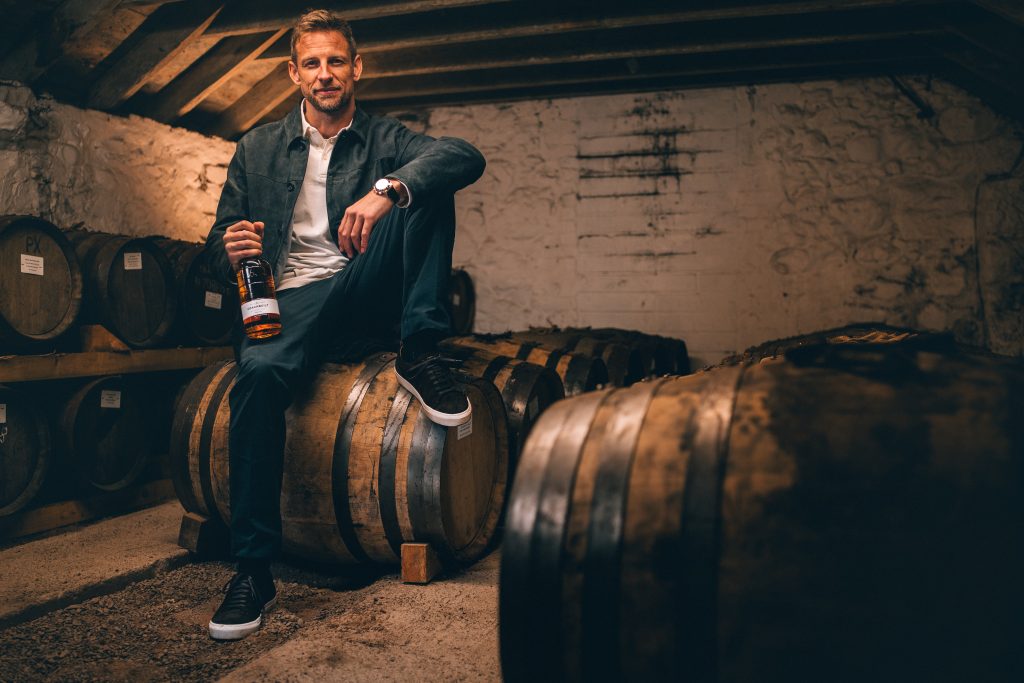 And what of those folk who still see blends as being somehow ‘less than’ single malts? “I think being a master blender is an unreal skill, and making a fantastic blended whisky is probably harder than it is for a single malt,” says Button. “I loved the process of trying each of the five separate whiskies before they were married together. The problem was, because they were all cask strength, it kind of blows your head off.”

When pressed on dream stockists, Button says he would love to see Coachbuilt behind the bars at “traditional British restaurants like The Wolseley, Chiltern Firehouse, the kind of places that I love to go myself”. He says that further down the road, supermarkets are a possibility, which may prove challenging at the £42 mark, but Button is confident the whisky will find its place. “It’s at the upper end for supermarkets, but I think it still works.”

As for getting the whisky past the tangled bureaucratic web and into the US, where Button lives with his wife, Brittny and two children, Hendrix, two and Lenny, one, there are still more than a few hairpin turns to navigate. “America is tricky. It’s a three-step process and it’s not an easy one,” says Button. “We’re working through it now to get Coachbuilt out to the States but it’s going to take a month or two (around April or May) before we’re there, which is upsetting for a lot of my friends. I’ve had a lot of messages saying ‘Are you kidding me?’”

The car fanatic, who participated in more than 300 F1 races during his career, today counts three Jaguars (an E-Type, a C-Type and the XK120), plus a Porsche 911 and a Lotus Evora among his personal vehicle collection. He has also found his passion for whisky accelerating over recent years. “I started collecting bottles a while ago, and have also been gifted a few nice ones. I was given a bottle for my 40th, and I sent George a picture and asked: ‘Is this any good?’. There was a long, stunned silence before he said: ‘Erm yes, that’s a definite occasion whisky’. So I knew it had to be something special. I vowed to drink it at my wedding, but we ended up getting into the Coachbuilt instead and didn’t actually end up touching the rare bottle at all. I’ve still got it!”

Button now joins the ranks of Bob Dylan, Matthew McConaughey, Sam Heughan, David Beckham and Drake in bringing out a dram of his own. But it’s far from being his only iron in the fire. Being busy is Button’s modus operandi. He managed to juggle the launch of Coachbuilt, not only with his own wedding plans – when we speak, he is two weeks into his new marriage, following a four-year engagement and nuptials derailed multiple times by lockdowns – but also with the release of Eletre, a new 600 hp electric Lotus SUV. Somewhere in between, Button even squeezed in a whistlestop trip to Saudi Arabia to provide commentary for Sky Sport Formula 1 during what was supposed to be his honeymoon.

When it comes to whisky, though, Button is in it for the long haul, and is already looking forward to longer-aged expressions and limited-edition runs of Coachbuilt in future. He hints at “exciting (there’s that word again) collaborations” with a few of his connections in the racing world, and to seeing Coachbuilt stocked in luxury hotels worldwide. Rumour has it that one five-star London venue has already signed on the dotted line.

“I can talk forever about how amazing the whisky is, but people will say ‘of course you’re going to say it’s great – you partly own the company!’”Button says. “So it needs to be critiqued, and we’re looking forward to that. It’s all about word of mouth. That’s what’s going to sell this whisky.”