The distillery is raising money for the Royal Navy Royal Marines Charity with the release of Dockyard Gin – Recognition ‘82; a special edition Navy Strength Gin created to commemorate the 40th Anniversary of the Falklands War. 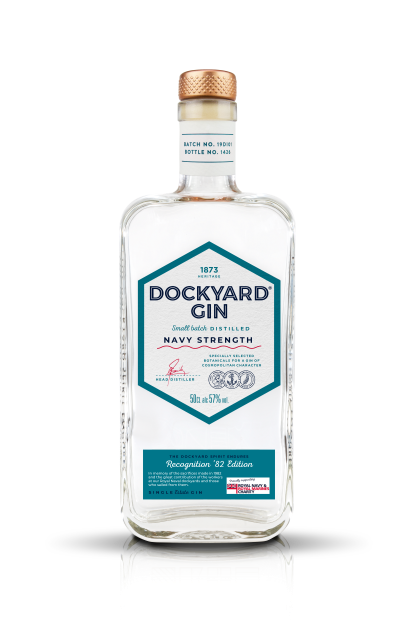 The Falklands War, which took place in 1982, was a ten-week undeclared war between Argentina and the UK over two British dependent territories in the South Atlantic: the Falkland Islands and its territorial dependency, South Georgia and the South Sandwich Islands.

To commemorate the war’s 40-year anniversary, Copper Rivet Distillery has launched the first and only Navy Strength edition of its Dockyard Gin.

The spirit is a grain to glass gin, made exclusively with grain grown within 10 miles of the distillery.

The distillery sits on the banks of the River Medway, on the opposite bank to Queen Elizabeth the First’s gunpowder castle of Upnor, and housed in Pumphouse Number Five of Chatham’s former Royal Naval Dockyard.

Stephen Russell, founder and commercial director of Copper Rivet Distillery, commented: “People who know us well, know that we don’t do special edition gins but seeing our roots here in the dockyard, the inspiration we’ve taken from the heritage and tradition of craftsmanship and our continued links with the Royal Navy, the 40th anniversary of the Falklands War was an anniversary which couldn’t be ignored.

“We’re delighted to have partnered with the Royal Navy Royal Marines Charity on this, our first every Navy Strength edition of Dockyard Gin.”

Dockyard Gin – Recognition ‘82 retails at £35 per 50cl bottle plus P&P. £5 from every sale will be donated to the Royal Navy Royal Marines Charity.

Back in February, Copper Rivet Distillery hosted The Prince of Wales, who was invited to celebrate the launch of the third whisky in the distillery’s new trio of quintessentially English Masthouse whiskies. Read more on the royal visit here.