Class without classification: Siran 2018 is Wine Enthusiast’s Wine of the Year

Chateau Siran 2018 is Wine Enthusiast’s Wine of the Year 2021.  The news was a surprise to many – including, as it turns out, Edouard and Sévrine Miailhe themselves. But as db’s Bordeaux correspondent, Colin Hay’s suggests, surprising though it might be, the unexpected honour is greatly merited. 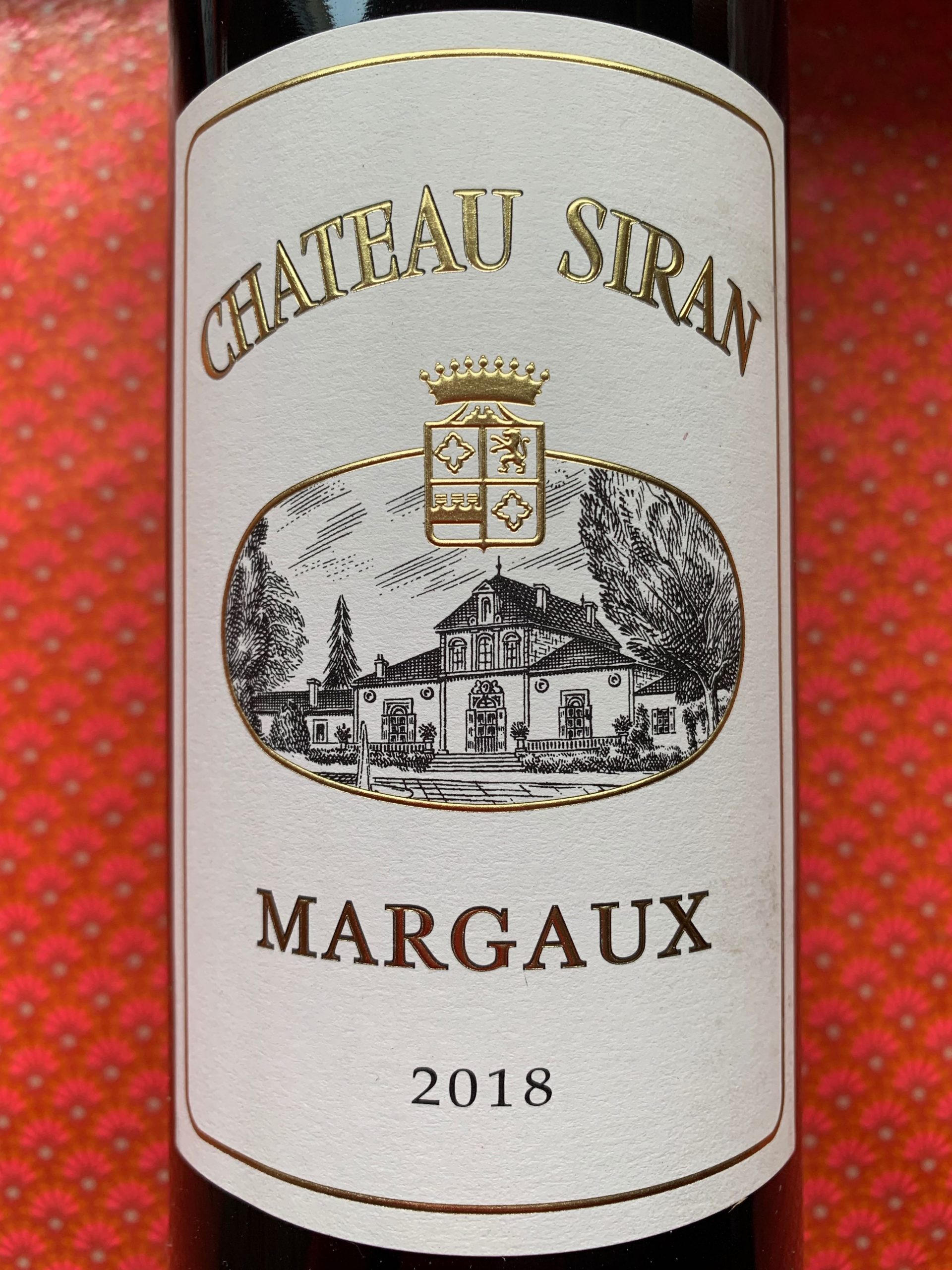 It provides an excellent opportunity to underscore once again the rapid and recent progression of the Margaux appellation whilst reflecting on the fascinating history, both ancient and more modern, of Siran itself.

Chateau Siran is one of the rare leading Margaux properties to be comprised of a single block of vines. Its 37 separate plots sum to 25 hectares and border three classed growths – Chateaux Giscours, Dauzac and Prieuré-Lichine. There are a further 13 hectares under vine in the appellations of Haut-Médoc and Bordeaux Supérieur and an impressive 50 hectares of wood and meadow, contributing to the maintenance of the rich biodiversity of the Southern Médoc (in which Siran is heavily implicated).

Siran has been managed by six consecutive generations of the Miailhe family since 1859, just four years after the famous classification of 1855.

This is where things start to become very interesting. For, at the time of the classification the property was owned by the Comte and Comtesse Toulouse-Lautrec Monfra, the great-grandparents of the painter Henri de Toulouse-Lautrec. As staunch monarchists, the family refused to allow Siran to be considered for what they decried as a ‘Bonapartist classification’.

Consequently, Siran belongs to a quite illustrious trio of estates – the others being Sociando-Mallet (Haut-Médoc) and Gloria (St Julien) – which, albeit for very different reasons, possess terroirs of unimpeachable classed growth quality without themselves ever having been classified.

Most famously, and perhaps most perversely, Sociando-Mallet was not eligible for inclusion in the classification because it was judged more than a courtier-day’s horse-ride from the centre of Bordeaux. Gloria, by contrast, didn’t even exist in 1855 – though, again in a sense perversely, all of the parcels which currently comprise the estate belonged to properties that were classified at the time. Of the three, then, Siran was the only property not to be classified out of political choice.

But it is not quite true to suggest that Siran has never been classified. For, alongside properties like Phélan-Ségur, Haut-Marbuzet, Chasse-Spleen and Poujeaux it was one of the crus bourgeois exceptionnels of the 2003 classification – even if none of these estates sought that designation in the subsequent and most recent (2020) reclassification exercise.

What is clear, however, is that both the terroir of Siran and then then-current reputation of the property would have merited inclusion in the 1855 classification. It is no surprise then that Siran is today a prominent and active member of the Union des Grands Crus of Bordeaux.

The terroir of Chateau Siran is exceptional – its precocious combination of gravel and sand sloping gradually towards the Gironde, facing east-west.  The vineyard is planted 46% Merlot, 44% Cabernet Sauvignon, 9% Petit Verdot and 1% Cabernet Franc, with the vines having an average age of 32 years, despite extensive recent re-planting.

In 2007 Edouard Miailhe became manager of the estate, the sixth consecutive generation of his family to hold the role. In the subsequent decade and a half he has, with his talented vineyard manager Jean-Luc Chevalier, overseen a detailed and complete restructuring of the estate. This started almost immediately, in 2008, with a major programme of replanting (following detailed soil analyses and making use of rootstock selection designed for optimal adaptation to climate change). More recently, attention has turned to the chai with, in 2018, new vats added to bring yet greater precision of the vinification and, in 2019, the reconstruction of the malolactic fermentation cellar.

Significant portions of the estate are now in sustainable agriculture with a number of parcels managed organically since 2018. There is minimal use of treatments, plot-by-plot ‘garden’ management of the vineyard and a profound commitment to maintaining and enhancing the biodiversity of the estate.

The wine itself shows many of the characteristics of the recent return to Margellais typicity that is has been so successful in winning back admirers to the leading wines of the appellation – precision, clarity, elegance and finesse. I was lucky enough to have the chance to re-taste the 2018 and 2015 vintages last week.

Siran 2018 (Margaux; 45% Cabernet Sauvignon; 44% Merlot; 10% Petit Verdot; 1% Cabernet Franc; 14.5% alcohol; aged for 12 months in oak barrels, 35% of which were new). Wine Enthusiast’s Wine of the Year in 2021 – and it is not difficult to understand why. Fresh, lightly herbaceous and archetypally Margellais on the nose with crushed petals, a subtle hint of sweet festive spices, cracked pepper, dried rose petals, rosewater and rose-scented Turkish delight; with air a lovely hint of the cedar that will develop with the cellar-time that this wine deserves. There’s a lovely very pure raspberry fruit here too and a fine trace of minerality. On the palate, this is cool, svelte and nicely focused, with silky tannins especially on the attack. The mid-palate is rich, compact and concentrated and the crumbly tannins bring a delightful chewiness to the long elegant finish. Impressive stuff indeed and certainly of classed growth quality. The 14.5% alcohol is scarcely noticeable and there is a cool taut classicism and precision to this that I really like.

Siran 2015 (Margaux; 55% Merlot; 38% Cabernet Sauvignon; 7% Petit Verdot; 14% alcohol; aged for 12 months in oak barrels, 35% of which were new). Evidence, were any needed, that the 2018 is not an exception and that Siran is now consistently excellent – if not quite at the level of the 2018. Extremely elegant if more closed on the nose at this stage – this is going through a slightly subdued aromatic phase one senses. Dark briary and stone fruit, a little hint of baking spice, hibiscus and pencil shavings. Ultra-soft and deceptively svelte on the entry, this is very dense and compact in and through the mid-palate with a shimmering fresh and pure raspberry and loganberry fruit accompanied by crushed black and Szechuan peppercorns that impart a cool focus and serenity. Slightly serious and austere for such a warm and sunny vintage. The tannic quality is impressive, but this still needs a good 5-10 years more in bottle before it will be at its most approachable. But the quality and potential is clear.