Rugby fan drenched with beer after invading pitch during game

Footage has emerged online of a Welsh rugby fan being drenched in beer by angry onlookers after invading the pitch at a Wales v South Africa game on 6 November. 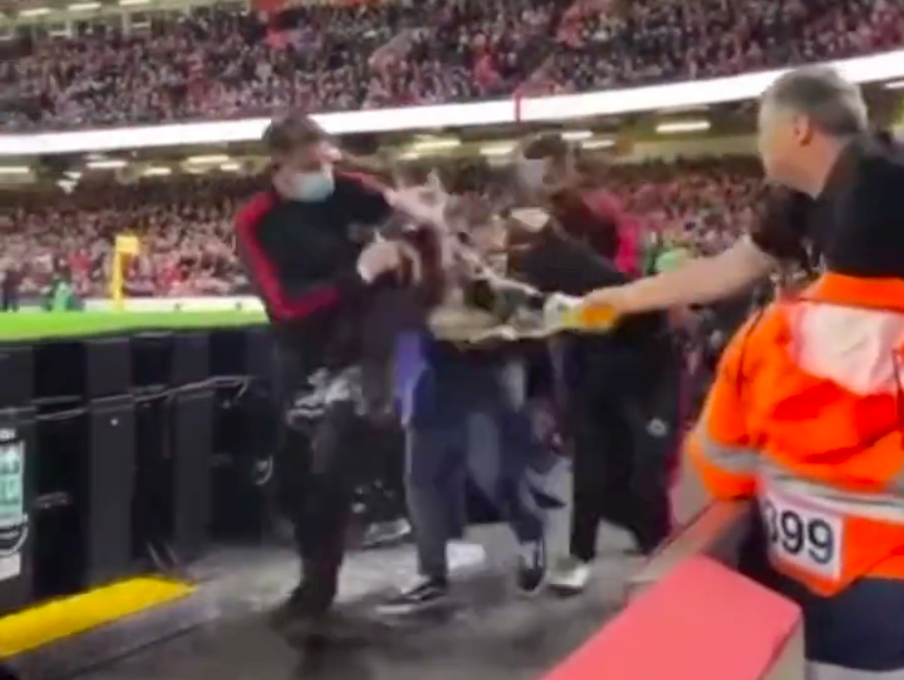 The fan was well and truly soaked by booing fans as he was escorted out of the stadium by three security staff members.

Footage shows the security guards rushing the man through the crowd, bent double in order to protect his head from the angry fans. Pints of beer are thrown at the pitch invader as he is escorted out, with one particularly well-timed dousing appearing to drench the man from below.

The pitch invader from the Wales vs South Africa game got a lovely welcome from the crowd as he got escorted out of the stadium. 👀 pic.twitter.com/FV3ScLZBE9

The spectator had climbed over the Principality Stadium pitchside barriers in the last quarter of the game, waving his arms at the crowd while on the field.

Welsh fans were particularly angry at the man for ruining a potential try-scoring opportunity for replacement Liam Williams, who was forced to dodge the invader and security guards while on the pitch. The score was 15-15 at the time, but South Africa nabbed the win with a 23-18 win in the end.

According to Wales Online, Mark Williams, Principality Stadium manager, said of the Wales v South Africa intruder: “We condemn this type of behaviour in the strongest possible terms. He was intercepted and immediately escorted from the stadium and handed over to South Wales Police.”

Wales have now issued a lifetime ban on the pitch invader from Saturday’s game against South Africa, who reportedly climbed the barriers for a £20 bet.

In more positive news, a particularly generous man has gone viral online after he was spotted carrying 48 pints simultaneously while watching a football match – a feat that has seem him hailed as a hero. Read more on that here.