Frescobaldi has revealed the latest art pieces and limited edition labels from its contemporary art project, the Artisti per Frescobaldi, in which international artists create work inspired by the Castelgiocondo wine estate. 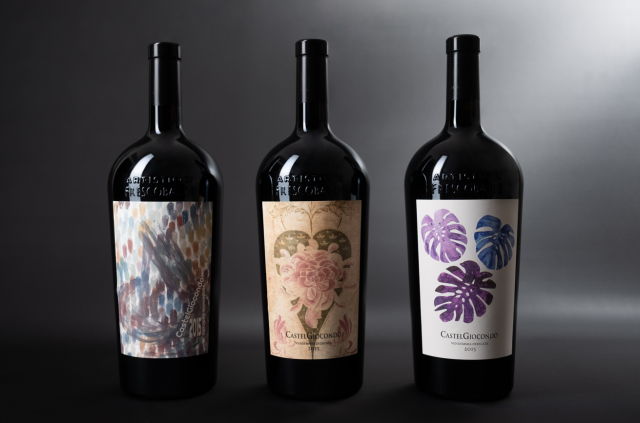 The latest edition showcases work by Canadian artist Andrew Dadson, America’s Erica Mahinay and Italy’s Gian Maria Tosatti, who were invited to take part this year. Each artist submits a work of art inspired by the terroir of CastelGiocondo, which is exhibited in the spaces and cellars of the winery and is designed to “engage in an intriguing and deliberate dialogue with their surroundings”, the estate said.

The works are also judged by a panel of art experts, as part of the Premio di Arte Contemporanea (Contemporary Art Prize), with Gian Maria Tosatti’s work ‘Cattività’ taking the top prize.

Erica Mahinay’s  work was entitled ‘Test Site (just think how we are constantly engaged with earthy heavens when we walk, how in fact everything we do with our limbs is connected with the Earth)’, while  Andrew Dadson created ‘Ginestra (Cysisus scoparius) Violet and Rye-Grass (Festuca perennis) Blue’.

Each work is released as a limited edition label on the estate’s Brunello di Montalcino CastelGiocondo.

“We are truly excited to at last announce the winner of this fifth edition and to unveil the works of the three competing artists,” Tiziana Frescobaldi, artistic director and president of the Compagnia de’ Frescobaldi said.

“The works now grace our CastelGiocondo estate, joining the 12 others from the previous editions… [The] 15 installations work together and reinforce each other, enriching the spaces of our estate and wine cellar through a marriage between wine and art that is exerting increasing impact and enjoying widespread success.”

The project, which is now in its fifth edition, was started in 2013 but harks back to the long history of patronage by the Florentine Frescobaldi family, which dates back to the Renaissance.

“That participation in the artistic world and support of artists remains today vitally important to the Frescobaldis,” a spokesman added. “That commitment was a shared hallmark of other ancient noble families as well, who from the Renaissance forward guided Italy’s artistic and cultural life, in Florence in particular, as patrons, commissioners of art, and collectors”.