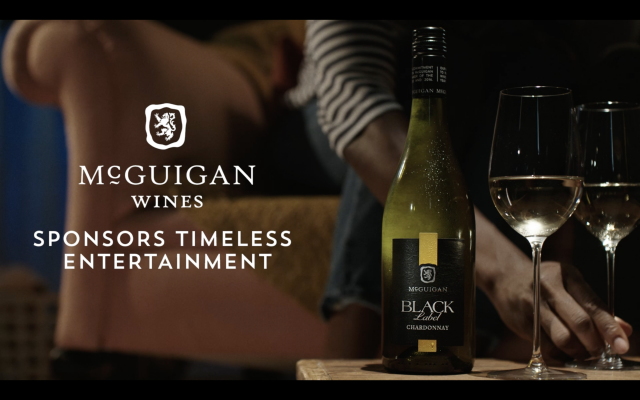 The new ads, which are part of a renewed £2m sponsorship deal, are expected to reach a total of over 10 million viewers across the UK over the next 12 months and form part of the brand’s new global creative platform ‘Just Because’.

Ben Turner, marketing director of Australian Vintage Ltd said the Drama Channel partnership was working very well for our McGuigan brand, as it reaching the right audience in a relaxed at-home environment.

Overall the deal has contributed to 18% growth in McGuigan brand awareness over the last two years, as well as driving one in five people exposed to the sponsorship to purchase McGuigan wine within the last three months.

This new 10 second creative, which was created with Kode Media and 20something, continues to play on tropes within British Drama, taking inspiration from detective shows to  costume drama to playfully build a similar kind of tension to fravourite drama shows, only to puncture it by revealing it as an everyday moments featuring the protagonists enjoying a glass of McGuigan Wine.

“We’re delighted with how our new idents have turned out which bring to life our updated brand positioning of ‘Just Because’, whilst also reinforcing that McGuigan is the perfect choice for everyday quality wine,” he said. “We hope these idents will help continue to drive further brand awareness and growth.”

It follows a hugely successful second year for the brand’s sponsorship of the Drama Channel, which saw an 9% uplift in brand awareness and 20% conversion rate amongst viewers, the company said. It helped McGuigan Wines go from 11th to 3rd position in terms of ‘first choice’ wines amongst UK consumers in the same period.

Turneradded that working with the team at Kode Media and 20something on the idents for a second year has been “creative, exciting and incredibly collaborative”.

“From start to finish they clearly understood the brief, Drama Channel sponsorship, and our updated brand positioning ‘Just Because’ which will help us resonate with current shoppers, and drive awareness with those yet to discover McGuigan,” he said.

“We are delighted with how the new idents have turned out, and can’t wait to see them live on the Drama Channel, which will time in perfectly with our activation plans across other consumer touchpoints such as Social, PR and in store over the next year.”

Kode Media’s director Laurence Dunmore described them as “mischievous films for McGuigan with a misdirect of drama and rug pull delivered with an Aussie irreverence and smile”.

He noted that they were crafted from a single take – from closeup of character to reveal of domestic setting and a beautifully appointed bottle of McGuigan Wine. Always inspiring and fun to work with the team at 20something and McGuigan Wines.”

Elliott Starr, senior copywriter at 20something added that whereas last year’s ads were “all about the nitty-gritty detail”, this year, there was a greater focus on characters, invoking the Stella Gibson’s and Ragnar Lodbrok’s “who have kept us such good company over the past year”.

The success of the sponsorship has helped contribute to 18% growth in McGuigan brand awareness over the last two years, as well as driving one in five people exposed to the sponsorship to purchase McGuigan wine within the last three months.

The disruptive new creative work, developed by 20 Something, will be on screens for the first time this week and brings to life the McGuigan belief that, rather than working hard to justify opening a bottle, wine should be effortless, ready to be enjoyed whenever.

The series of new idents cleverly build on dramatic scenes with a humorous twist that brings them right back to the everyday – whether that’s putting the kids to bed after a long day at work or firing up the BBQ.

The sponsorship is expected to reach a total of over 10 million viewers across the UK over the next 12 months.