The British-run Domaine Mirabeau in Provence is one of the wine estates to have been affected by a deadly wildfire currently sweeping through southern France.

As reported by Decanter, over 1,200 firefighters have been battling to contain the blaze, which has so far claimed two lives and scorched 7,100 hectares of land.

The fire began the morning of Monday 16 August in the Var region of southern France, and was thought to have started from a discarded cigarette.

It has since spread to the Côtes de Provence region, helped along by hot dry conditions and the Mistral wind, which is blowing with particular force at the moment.

According to Decanter, by 17 August, 5,000ha of land had been consumed by the fire. Among the wineries caught up in the blaze are Château des Bertrands, Ultimate Provence and Château St Roux.

Jeanny Cronk, co-founder of Domaine Mirabeau, took to Instagram to show her followers the extent of the damage at her Provence estate caused by the fire. According to Decanter Mirabeau had to be evacuated on 18 August. 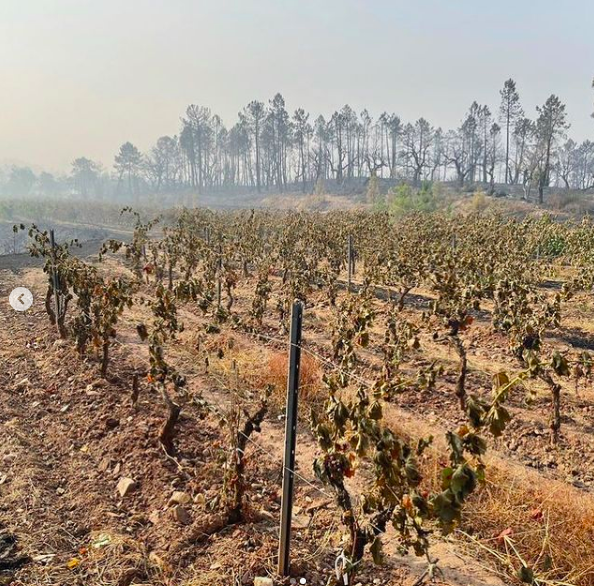 “We’re very lucky to have this view of our battered and charred farm. This is down to five trucks of firefighters and our farmer Anthony who refused to let the houses and animals go to a devastating wall of fire coming at them.

“The remains of the smouldering outbuildings tell their tale of how violent and close it was. The vines are particularly impacted and there will likely be no harvest time for those that made it.

“Sadly the wind is up and it’s not even over, though not much left to burn around us,” Cronk wrote on Instagram.

The south of France hasn’t experienced a fire of this extent since the incredibly hot vintage of 2003. In addition to the Var blaze, firefighters have also been tackling wildfires in the Aude region, and in Beaumes-de-Venise in Provence.