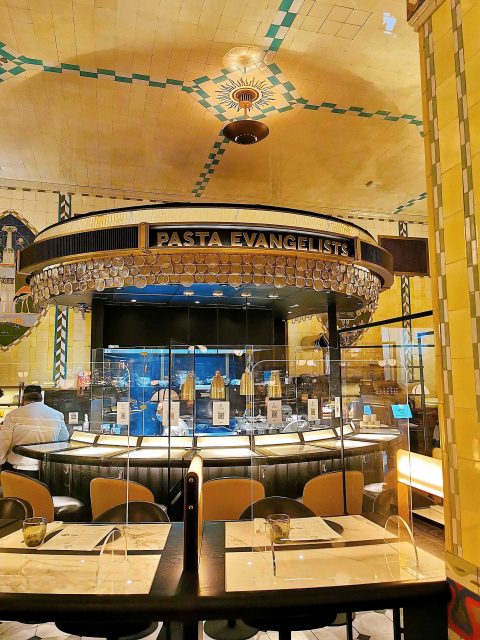 The concept: With Italian cuisine riding high as the world’s favourite chow, in 2016 Genoa-born, London-based entrepreneur Alessandro Savelli came up with a cunning plan – to flog fresh pasta and stylish, authentically Italian sauces to cash-rich, time-poor Brits in search of midweek meal inspiration.

It helped that his Pasta Evangelists business has had the backing of a trio of food heavyweights from the get-go – Prue Leith, Giles Coren and William Sitwell are all co-founders and shareholders in the venture – which raised £3.5 million in funding in 2020 to expand across the UK, with the ultimate goal of taking it international.

The décor: Having opened its first concession within the Harrods Food Hall in 2016, this summer Pasta Evangelists launched its first restaurant within the luxury department store’s Dining Hall, a stone’s throw from Tom Kerridge’s high-end chippie.

There’s something a bit library like about the venue, from the covid-safe partitions to the Art Deco-inspired lamps spaced at intervals along the horseshoe-shaped bar complete with comfy swivel seats. The kitchen is reassuringly open. Those sat up at the main, marble-topped bar get a front row seat to the action, where you can watch the flickering flames from the wood-fired oven dance over the bread beneath.

The food: Head chef Michele Rodelli’s modest menu celebrates authentic Italian flavours. There’s no messing about here – this is an unashamed carb fest, so calorie counters may wish to head elsewhere. Among the most delicious things we enjoyed during our visit was a simple starter of Ligurian classic focaccia drizzled in olive oil and sea salt then drowned in a pool of creamy stracciatella and dotted with datterini tomatoes.

The intermingling of the gooey cheese with the intensely sweet tomatoes, and the way their juice seeped into the salty bread was profound, and proof that high quality ingredients are the secret to successful dishes. It was a joyous ensemble that spoke proudly and confidently of where it came from, proving that the simple union of bread, tomatoes and cheese in the right hands can be elevated to sublime heights of flavour intensity and enjoyment. 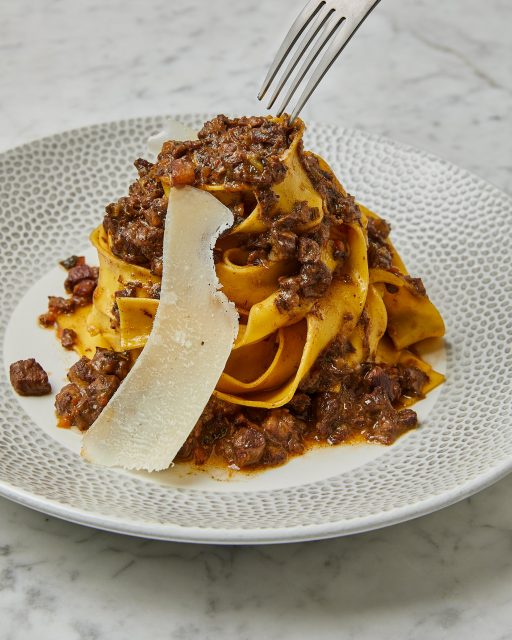 Signature dish: The selection of pastas on offer is modest – there are six dishes to choose from on the main menu, along with a rotating selection of chef’s specials. On my visit I was torn between the sedanini cacao e pepe with shaved black truffle and the lobster spaghetti.

Fabio the supervisor suggested I go for the latter to pay homage to the fish on a Friday tradition. My generous portion was artfully assembled to evoke an erupting Mount Vesuvius dusted with Parmesan. The thick glossy strands of spaghetti were pleasingly piquant and al dente, as all pasta should be.

The hunks of sweet lobster, meanwhile, were made all the sweeter by the chilli-flecked tomato sauce, which was given added interest by bites of earthy aubergine in this salty, satisfying dish.

The wine: Like the menu, the wine list is short and sweet, but boasts a number of Italian gems. We kicked things off with a refreshing flute of Jeio Brut Prosecco from Bisol, which charmed with notes of Conference pear and white flowers.

Helping to temper the spice of my lobster spaghetti was a golden glass of 2019 Chardonnay from Alto Adige-based producer Alois Lageder, which sang of cleansing citrus and white fruit flavours, from lemon and apple to apricot and peach.

What could be done better: The dessert offering was a little on the small side – the only options were Italian classic tiramisu or a selection of six mini desserts, which we opted for, the most memorable of which was a wonderfully sharp lemon tart topped with an elegant swirl of Italian meringue.

Last word: This is Harrods, so the pasta comes with a Knightsbridge price tag – my lobster spaghetti cost £40, but the portion sizes are generous and the dishes are cooked with flair and heart, while the service is as warm as you’d hope for from an Italian establishment. It’s worth the detour for the focaccia alone…