Colossal beer bar opens with a staggering 42 brews on tap

A £10million drinking den in Lancashire is being lauded as ‘the longest bar in the north’, and comes with an extraordinary 42 hand pulls. 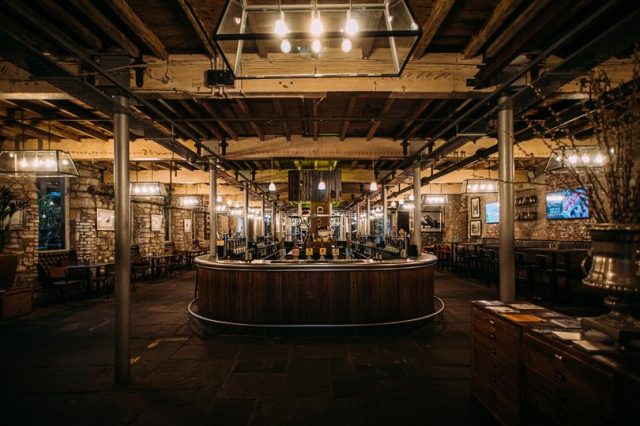 Whoever said “there’s no such thing as too much choice” has clearly never sweated while a bartender waits patiently for their order at The Bowland Beer Hall, where more than 42 different pints swim before your eyes. In fact, you could rack up a few miles just walking up and down the 105-foot bar, taking in all the options.

The new multi-million-pound beer emporium, fashioned inside a 19th century weaving mill in Clitheroe, is part of an ambitious project that’s taken six years to get across the line.

The James Places Group, which owns the complex, was determined to make sure the impressive oval bar was 105 feet-long when building the venue, having craftily checked the previously held record for the longest local bar.

“When we were putting all the pipes into the cellar, the owner James rang me to say we needed to extend the bar by another couple of metres, just to be sure,” Warren Bennett, the group’s commercial director, told Manchester Evening News.

And if the 42 beers on tap aren’t enough, there are 40 keg lines too, featuring a rotation of different brews from producers across the North West. The robust selection includes a wide choice of ales and ciders, as well as Bowland Brewery’s own core range of six beers.

As well as the gargantuan beer hall, there’s a 400-cover courtyard, food hall, ice cream parlour, four-screen cinema and a 39-bedroom hotel within the confines of the old mill, which was built in 1823. A gin distillery and bistro will complete the offering later this year.

“There are now more people employed on the site than when it was a fully functioning weaving mill,” said Bennett of its “well over 200 employees”.

According to the report by the Manchester newspaper, the project has done extremely well since opening, with sales up 25% on like across the group.