Taylor’s Port is expecting to sell around 1 million cans of its new Portonic rtds in the first year, after strong initial pick up across international markets, its md Adrian Bridge told db. 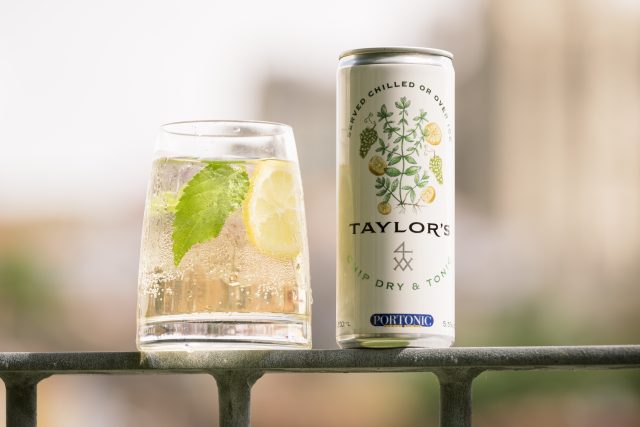 Speaking exclusively to the drinks business last week,  managing director of Taylor’s, Adrian Bridge said the early signs on the newly created sub-category for port are very good, with a strong, positive reaction from multiple markets.

The new White Chip Dry and Tonic portonic, which was launched last month, is already listed in the main supermarket chains in Portugal and initial sales have been “extremely encouraging” he said, while international markets such as the UK and US are showing strong interest.

In the UK market, interest so far has been strongest from the independent sector and medium-sized supermarkets, as the big supermarkets often take longer to analyse the potential.

“They will be looking at hard seltzers which are supported by major multi-nationals, so they have a different financial support package than that might be available for port,” he explained. “We’ve orders from the US, although Canada is a monopoly market so it will take a bit of time to get it listed,” he noted.

Bridge said that the premix format itself was in strong demand as consumers found it convenient and that it opened up consumption moments that might not have previously have existed for Port.

“It’s much easier to throw a six- or twelve-pack in the chiller to take to the beach or fishing than to put in your bottle of Port, your tonics, mixers and glasses and bits,” he pointed out.

Interest has also been strong from the on-trade, according to Andrew Hawes, managing director for Fladgate’s UK agent, Mentzendorff.

“We thought that with the on-trade and white Port, bartenders would be mixing them up, we didn’t think of it so much for rtds, but that’s not what’s happening,” he told db. “There has been strong interesting from caterers getting going again after lockdown as it’s a super convenient product and people are keeping things simple with Covid measures in bars. Having cans ready is an easy serve.”

Taylor’s launched the ready-to-drink 5.5% abv Taylor’s Chip Dry and Tonic last month (RRP: £1.99), with sister company Croft announcing it was launching a pink version.  Croft was the first Port house to bring out a Port rosé in 2008.

Taylor’s and Croft are both owned by The Fladgate Partnership, which is headed up by CEO Adrian Bridge.

For the full low-down on the Port category, read our upcoming feature in the July issue of the drinks business.