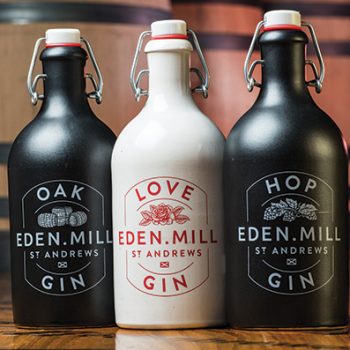 The partnership sees the LM-B Group take on the UK distribution rights for Eden Mill’s gin portfolio to the UK multiple grocers from this week, which is expected to bring significant growth to the St Andrew’s based company that will boosts its presence in the UK off-trade.

It follows a recent investment in a new Glasgow-based bottling and distribution hub, which has quadrupled capacity to around 4m bottles a year.

LM-B Group is taking over communications for the distribution of Eden Mill gin, gin liqueurs and RTDs, which will see it reposition the  famous Eden Mills Love Gin. The company are starting to move away from their traditional ceramic bottles in order reduce waste by producing a lighter, more easily recycled product and will roll out a new 70cl sustainable crystal cut bottle for its Love Gin that uses 18% less glass than the industry standard. Currently Eden Mill only supply Love Gin in 50cl bottles to the off-trade.

Eden Mills’ head of sales Matthew Miller said the company were delighted to announce the new partnership with a group that was “well known and respected for their unparalleled relationships with UK multiple retailers”.

“This marks the beginning of an exciting new chapter for Eden Mill and we’re in an excellent position to fulfil the increased demand this development will bring with our new bottling hub in Glasgow,” he said. “We anticipate our new production facilities will quadruple our output and greatly increase our potential for developing new and exciting products.”

Claire Baigrie, LMB Group UK Sales Director said the gin was already in high demand across the UK, thanks to the craftsmanship, quality and character it offered consumers, and said she believed it had huge potential within the buoyant UK gin category.

“Many of the spirits within our own portfolio are already star performers in UK supermarkets, so we relish the prospect of helping Eden Mill build their brand and achieve further growth and success,” she said.

The Scottish distillers, which was included in the Sunday Times Fast Track 100 in 2019, was the first single site brewery and distillery in Scotland and the first to make spirits in St Andrew for 150 years. They are planning development of one of Scotland’s first ever carbon-neutral single malt whisky distilleries as part of a £10 million venture, which will be based on the Eden Estuary.