Big plans revealed for Sassicaia estate as it celebrates 50 years

In an exclusive interview last week, Sassicaia ambassador Priscilla Incisa della Rocchetta told the drinks business that big plans were afoot for the Tuscan estate as it marks 50 years since its first wine was made for commercial release.

Having unveiled the 2018 Sassicaia to the trade and press last month, Priscilla said that the latest release marked the 50th year since Sassicaia’s inaugural commercialised harvest – which was 1968 – although not strictly the 50th vintage, as the estate chose not to make a wine in 1969 and ’73.

Prior to the 1968 harvest, the wines from Tenuta San Guido were a “private affair”, only to be consumed at the estate.

Coinciding with the release of this year’s milestone vintage, Priscilla said that the Bolgheri-based estate that produces Sassicaia, Tenuta San Guido, would be starting a new project shortly, marking the first major investment at the property since the construction of a new ageing cellar for Sassicaia, which was completed in 2007.

However, the change does not concern Sassicaia, but another wine from the property, called Guidalberto, which, although cheaper and less age-worthy than the flagship brand, Priscilla doesn’t like to call a ‘second wine’ because “it has its own vineyards, it is a different blend, and it is vinified in a different winery.”

Guidalberto, a 60:40 Cabernet Sauvignon: Merlot blend, is significantly cheaper than Sassicaia, with the former retailing for around £40, around 1/3 the price of the top wine, which gives its name to the Tuscan site – this is Italy’s only official single estate classification: Bolgheri Sassicaia DOC.

So, starting this year, having been postponed from 2020 due to Covid-19, will be construction of a new winery exclusively for Guidalberto, named after an ancestor of the Incisa della Rocchetta family. 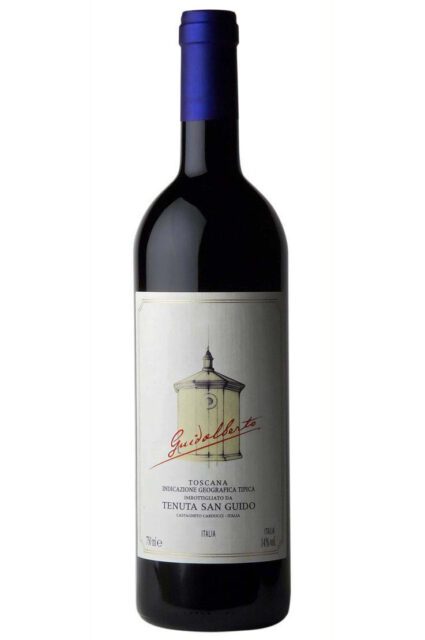 While Guidalberto, which was launched in 2000, is made along with a third wine from the family, called Le Difese – a local term for the tusks of a wild boar – in a former olive oil press on the estate, Priscilla hopes that by 2023 Guidalberto will be produced at its own facility.

This will be found within and behind an existing building on the estate, which is a brick factory that produced materials for the area from the 1940s until the 90s, and is found within the centre of Tenuta San Guido.

Behind the building is a hill, which was excavated to source materials for the factory, providing the perfect area for an underground facility, with Priscilla planning to fill in the hill with the winery and barrel cellar, and then recreate the natural landscape on top of it, while also restoring the façade of the brick factory.

“This is not going to be a bombastic super wow winery, but restoring something nice and historic and using it with a new purpose,” she told db.

And with its new facility, Priscilla said that it was possible Guidalberto will be promoted from its current classification as IGT Toscana to a Bolgheri Sassicaia DOC, having only used the former because it offers more freedom, even though the wine conforms to the latter’s stricter rules.

Finally, Priscilla ruled out the suggestion that there might be further vine plantings on the property.

Although Priscilla prefers not to call Guidalberto a ‘second wine’, as previously reported by db, the Covid-19 pandemic has led to a surge of interest in the second and third wines of Tenuta San Guido and fellow Super Tuscan estate Ornellaia.

Speaking last week to db, she said that demand for the wines from the property were “quite stable, nothing is booming,” with “a bit more movement in the Asian part of the world.”

Concluding she said that Tenuta San Guido’s classic markets are the US, China, Switzerland, the UK and Japan, while reminding db that the property was “special” in that it sells as much as 30% of its production to its domestic market – “our first market is still Italy,” she stressed.