The fine wine secondary market has overcome a difficult start to 2020 and continued to rise in November which set new highs in value and volumes traded. 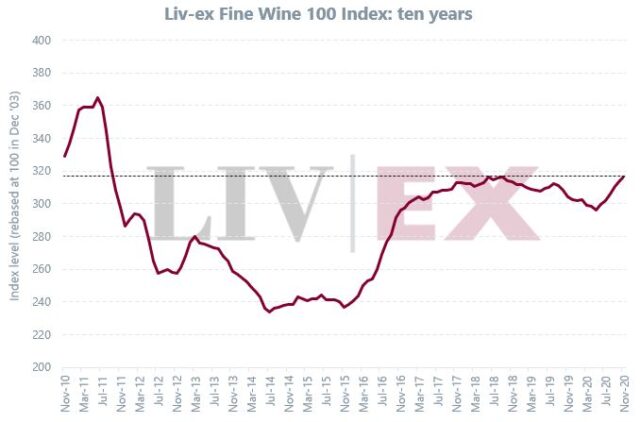 As reported by Liv-ex, its benchmark index, the Fine Wine 100 rose 0.8% in November in what was an “extremely active month” which saw the LIVE exposure – a measure of liquidity – rise above £80 million for the first time.

The number of uniques wines traded has risen continuously since May to over 2,000 in November and the index is at its highest level since August 2011.

Burgundy had a good month, with its highest monthly share of trade by value this year (23%) and there was on-going interest in Italian labels with the 2015 vintages from Antinori’s Super Tuscan stable; Tignanello and Solaia up 5.9% and 4.5% in average price per case respectively, while Giacomo Conterno’s 2010 Barolo Riserva Monfortino led the way up 6.6%.

Meanwhile, the much broader index the Fine Wine 1000 ran a little flatter in November but still representing the sixth positive month in a row and bringing it up to over 1% on the year-to-date.

The Champagne 50 and Italy 100 indices continued their positive performance which has been going on all year, both were up over 2%.

The Bordeaux Legends 50 and Rest of the World 50 both declined however, the latter weighed down in part by its Australian labels such as Penfolds Grange which have taken a body blow following the tariffs imposed by China.

The average price of Penfolds’ 2007 Grange for example tumbled 10.5% as a result. Taylor’s 1997 and 2000 vintage Ports had a positive month by contrast but not enough to make up for the Aussie deficit.