Château Palmer released its final tranche of 2010 wine this week, the first in its new programme of ex-cellar releases known as ’N-10’. 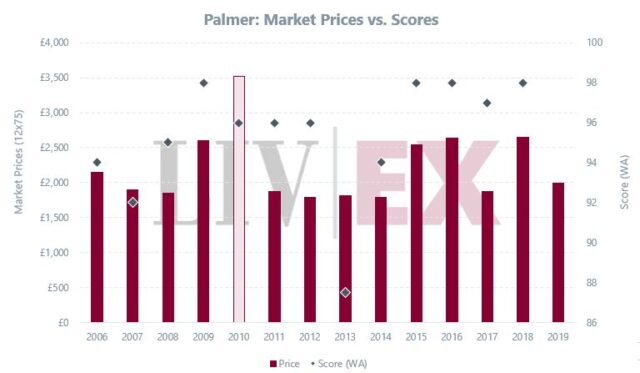 The Margaux third growth announced at the beginning of the month that it would release the “final tranche” of 2010 wines from its cellars on 24 September.

Furthermore, henceforth this date would herald the re-release of a 10 year-old vintage of the grand vin from its cellars.

The estate has been holding back 50% of its stock every year since the 2010 vintage in the build up to this moment.

The wine is being offered for £3,516 per dozen by the international trade which is 46.5% more expensive than the wine was on release and 35.2% above the going market price (£2,600 p/dz) for that original stock.

The wine has good scores, Neal Martin upgrading it to 96 in April of this year and calling it “quintessential Margaux”.

There is always going to be a premium for ex-cellar stock as past releases from Latour have shown but there’s no doubt this is a pretty steep opener.

The 2010 is of course a great vintage in Bordeaux but the 2011 and 2012 vintages from this estate also both received 96 points from The Wine Advocate and are under £2,000 a case currently (though the 2010 unarguably has a greater upside and life ahead of it).