Ranked eighth in the World’s 50 Best Bars, Atlas in Singapore is creating global cocktail experiences for guests to enjoy. 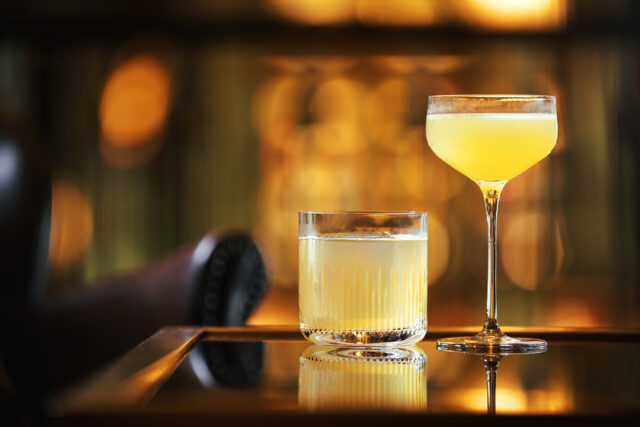 Many overseas guest stints were put on hold this year due to the travel restrictions. Now, Atlas, a renowned gin bar in Singapore, has initiated a creative new campaign named world Atlas, which sees it collaborate with bars scattered in different corners of the globe so you can travel through the medium of cocktails.

In the experience, a cocktail flight consisting of two signature cocktails from each destination bar will be presented for drinkers to explore. Each flight is introduced by Atlas’ head bartender Jesse Vida, who will be joined by a representative from the destination bar via an Instagram Live.

Running for a total of four weeks, all flights are complemented with a bite from the kitchen of the “visiting” bar, and are also available as a shared option, with two half serves of each cocktail and a snack each. Postcards from each edition are presented with the flight. Flights are priced at S$48 for one, and a flight to share is priced at S$56.

From now until Saturday, 8 August, guests can enjoy signature concoctions from Above Board, an intimate cocktail bar serving up classics and riffs on old favourites. Designed by Hayden Lambert, the two featured cocktails are Corrective Cup, a blend of Tequila, chestnut, bittersweet Italian liquor, lemon juice and aromatic bitters, and Erin’s Delight, made with London Dry Gin, Italian bitter, orange, lime juice and orange bitters.

During these challenging times for the industry, the bar community has come together to support one another, and as such, Atlas is donating 20% of the proceeds from each flight to the guest bar.

The next flight in the series will see Atlas partner with Lucy’s Flower Shop in Stockholm, Sweden. Available from Monday, 10 August until Saturday, 5 September, the flight will reflect head bartender Hampus Thunholm’s flair and passion. Having only opened its doors in November 2019, the award-winning bar is the brainchild of two of Sweden’s most regarded bartenders, Ola Carlson and Alex Skärlén.