Here’s how to grow your brand in a crisis

A webinar last week by one of the world’s biggest wine brands outlined how to grow sales during a crisis using a few simple techniques that are especially applicable during the current pandemic.

According to Concha y Toro, which owns leading wine brands Casillero del Diablo and Cono Sur from Chile along with Trivento from Argentina, despite the temptation to slash marketing budgets during times of recession, you should in fact ramp up your spend to secure a greater market share, and faster growth when times eventually pick up.

Quoting research from Kantar, head of marketing for CyT UK, Emma Ashton, said that 92% of consumers “feel advertising should continue during the crisis”, adding that the way in which brands respond will have a huge impact on their future success – which does mean that there is “the potential to get it right, and wrong”.

She also recorded, again drawing on Kantar research, that advertisers who “invest in brands grow nine times faster than those who don’t post recession”

But there’s also on opportunity for sales success during troubled times, because brands provide comfort for consumers. “During the 2008 recession we saw that branded wine sales were sustained and stable, and it’s the same pattern now,” she said.

Continuing she said, “The key reason for buying brands during a crisis is stability; people look for reassurance… and a study in 2007 showed that if you remove brands, it removes a sense of stability.”

Citing some examples of drinks brands that are currently investing in marketing, she showed how producers are finding opportunities to build their brand awareness and sales during the pandemic.

Even Corona beer is marketing itself effectively during the pandemic, and using humour, having initially suffered from a negative association with Covid-19 – as previously reported by db, some people believed there was a connection between Corona and the coronavirus.

Consequently, its current brand campaign reads: ‘Hola Amigo, Just a friendly reminder we are not a virus, Gracias!’

Another first-rate example is also found in the beer category, with Guinness taking its iconic foam head and substituting it with a sofa – under which reads the message: ‘Stay at home’ (see below). 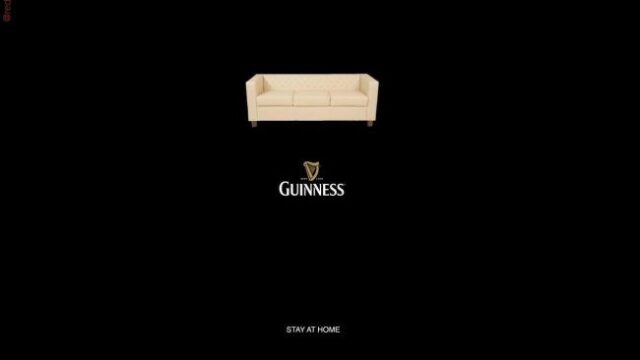 Finally, she mentioned Tennessee whisky Jack Daniel’s, which is running a one-minute spot that deals with how the human spirit is adapting to social distancing measures, ending with the on-screen message: ‘Dear Humanity, Thanks for making social distancing, social. With Love, Jack.’

Meanwhile, Concha y Toro is continuing to invest in its brands with, for example a Discovery Channel sponsorship concerning the wine group’s Trivento brand, while the company’s flagship Casillero del Diablo brand is sponsoring Sky Cinema – featuring daily on over 20 channels.

Noting that beers, wines and spirits brands are providing a relevant role meeting consumers emotional needs during Covid-19, she said that “wine brands can play a role in creating long term category value during times of recession.”

Finally, CyT UK commercial director Clare Griffiths summed up the webinar by stressing the group’s commitment “to continuing to build our brands and drive category value with our customers.”

This, she added, was being “demonstrated through continued marketing investment to reassure consumers when they need it most.”

‘NO NEED TO DISCOUNT WINE DURING LOCKDOWN’ SAYS CYT