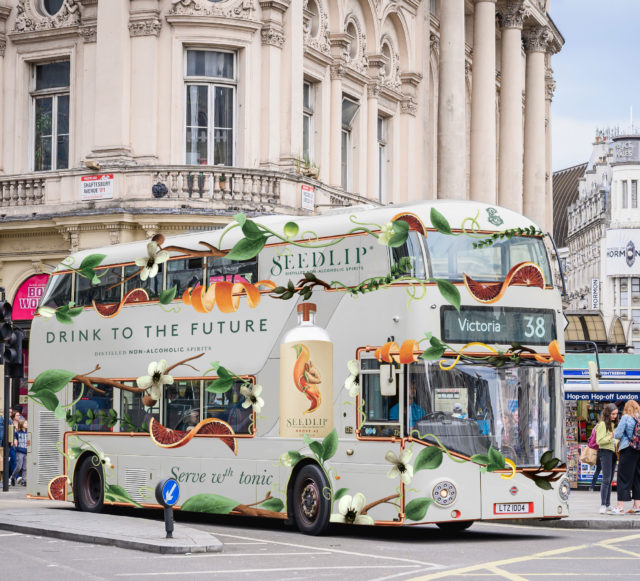 It’s the first time Diageo has set up a campaign for Seedlip, after upping its investment in the business to a ‘significant’ majority stake in August 2019.

Developed by Seedlip’s EU marketing director Ben Thomson alongside Creative agency And Rising, the campaign features the strapline ‘Drink to the Future’, which sits above a bottle of Seedlip and is framed by the key botanicals that make up the booze-free ‘spirit’.

Emma Wykes, Seedlip COO, said: “since the launch of Seedlip four years ago non-alcoholic drinks brands have continued to flourish as they become progressively prevalent in consumers’ consciousness.

“We know people are looking for greater range when it comes to non-alcoholic choices and we hope that with this creative we will inspire both new & existing Seedlip consumers.”

Rob Ward, Strategy Partner at And Rising, said: “Our task was to entice more people to join this revolution and help show the credible options Seedlip provides for someone who doesn’t want to drink alcohol. We focused on making the iconic bottle the hero and framed it in the beautiful, natural ingredients that make Seedlip so delicious.’

Seedlip Founder Ben Branson adds: “To be kicking off 2020 with our first ever advertising campaign is incredibly exciting and a very proud moment as I look back at what we’ve achieved in just four years…we are still just scratching the surface of non-alcoholic spirit’s potential and this advertising campaign will take us another step closer to our aim of making sophisticated non-alcoholic options as relevant as their alcoholic counterparts.”

Diageo bought 20% of Seedlip in 2016 through its Distill Ventures division, an incubator for emerging brands which provides funding and guidance to help them boost their own profits and expand.

The drinks giant is investing in the zero-proof brand’s visibility after more spirits groups and start-ups have rolled out their own non-alcoholic spirit alternatives following Seedlip’s launch in 2015.

More than 60 non-alcoholic drinks brands are set to to exhibit at London’s Mindful Drinking Festival in January this year, close to 10 of which specialise in products inspired by traditional spirits such as gin, rum and whisky.

It comes as an increasing number of people claim to be teetotal in the UK. In 2015, one in three 16- to 24-year-olds were completely teetotal, compared with one in five in 2005, according to research published in BMC Public Health in 2018.

Diageo’s shares rose by 1% when it announced it had taken over a majority stake in the brand last year.

Although this is the first time Diageo has run a campaign for a product like Seedlip, the firm is hardly out of its comfort zone when it comes to low ABV drinks marketing. Diageo has previously run campaigns for Guinness Malta in Africa, TV advertisements for Gordon’s Ultra Low Alcohol Gin & Tonic in various markets in Europe, and advertising for Guinness Pure Brew in Ireland.