Campbeltown’s Glen Scotia distillery has raised over £10,000 for the historic Machrihanish golf club, which lost its clubhouse in a fire in December last year. 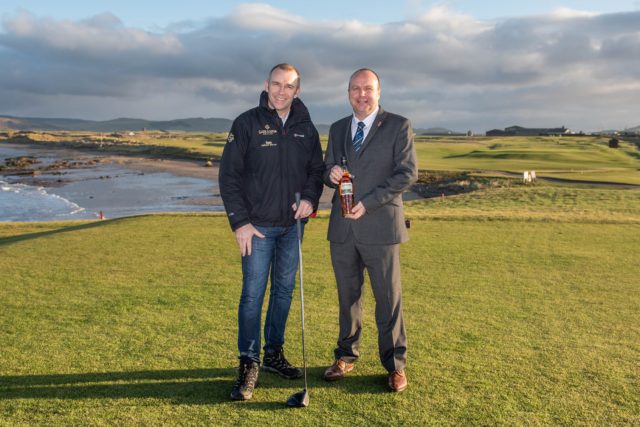 The clubhouse was destroyed in a blaze which broke out on 19 December 2018, and is now set to be replaced with a new purpose-built facility.

The links course, located just outside the village of Machrihanish, in Argyll, was designed by Old Tom Morris in 1879.

It now attracts golfers from far and wide, with esteemed American golf Jack Nicklaus once stating that the course had the best opening hole in the world.

To raise the funds, Glen Scotia donated a whisky cask to the golf club’s fundraising campaign. The distiller filled 196 bottles from the cask, which were sold at its visitor centre and packaged in special bottles, which included the cask number and the golf club logo.

Glen Scotia said that some of the new owners of the whisky were from as far afield as Sweden and the US.

The Campbeltown producer also gave Machrihanish two further bottles, one of which was signed by Northern Ireland’s Darren Clarke when he won The Open in 2011. The club will keep the bottle on display in the bar, while the other will be given away in a raffle.

Willie Ross, captain of Machrihanish Gold Club, said: “We are very grateful for the support we have received from Glen Scotia. They were one of the first organisations to lend their helping hand and to have raised so much money is truly incredible.”

Iain McAlister, distillery manager, Glen Scotia, added: “Like everyone else in the local community, we were absolutely heartbroken by the fire at Machrihanish golf club. It is central to life here on the remote Kintyre peninsula, bringing visitors to the area and providing a much-loved social destination for locals.

“It is highly rewarding to be able to support the campaign to rescue the club and I am looking to enjoying a dram of our single cask bottling at the club house when it eventually reopens.”