A drinks startup in the UK has developed two beers infused with CBD, the non-psychoactive component of cannabis, and its directors have already set their sights on national pub listings. 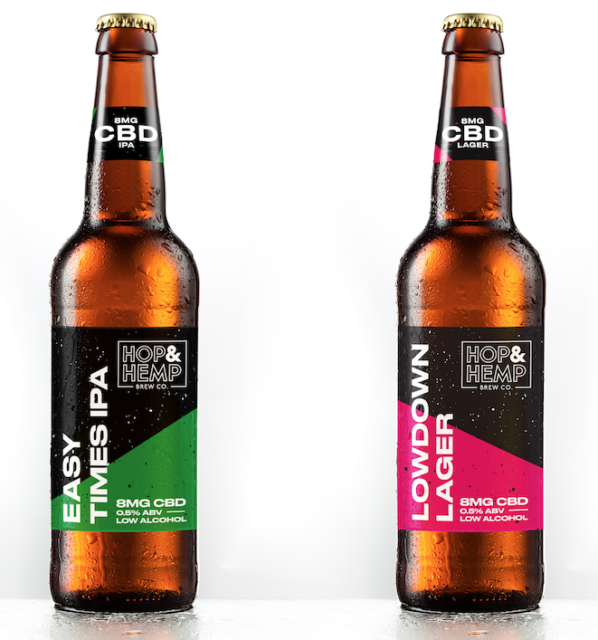 Derived from the hemp plant, the CBD used in Hop & Hemp beer contains 0% of the psychoactive constituent THC, which some budding US beer brands are incorporating into their own products.

James da Silva, from Hop & Hemp, said: “We love beer. Sometimes maybe a little too much. That’s why we made it our mission to create brews that have all the big flavours of the best craft beer that is suitable to drink throughout the day. With no sore head and no Sunday write off, this product is perfectly placed to provide a viable alternative to regular ABV beers.”

The first two beers from the collection are Easy Times IPA and Lowdown Lager, both of which have an ABV of 0.5%. The beers also contain 8mg of CBD per 330ml bottle, which “helps takes the edge off an evening”, according to a statement.

Charles Instone, one of the directors behind Hop & Hemp, told the drinks business that it was crucial for the brand that the beer “tasted great” and had the same flavour and weight consumers expect from a traditional beer.

Hop & Hemp’s production has been contracted out to a brewery close to London, though Instone declined to reveal the company’s name.

The brewery adds maltodextrin to the beers to recreate the mouthfeel of a standard beer, a process Instone believes is innovative in the CBD drinks sector.

“A lot of big firms like AB InBev are spending money researching this…I think we could be the only ones in the market that have got it cracked.”

Maltodextrin is a white powder made from corn, rice, potato starch, or wheat. It is used as a stabiliser, sweetener and thickener in many packaged foods.

Instone said his team have so far produced 250,000 bottles. The beers are currently available to buy from Hop & Hemp’s website, but the CBD entrepreneur said he’s already received attention from national retailers and a string of UK pub groups.

“Everyone wants to be the first retailer to list a CBD beer,” he told db, “but they’re also being cautious because it is still a grey area.”

The UK market for CBD products is already set to be worth over £1 billion this year, according to the Cannabis Trade Association.

Hop & Hemp launched in March 2019, according to records on Companies House. Among the brand’s four directors are Charles Instone, director of e-commerce at London-based CBD retailer The Drug Store, and Lars Thomassen, the chief executive of Danish Cannabis, a medicinal cannabis company working in partnership with Canadian firm Canopy Growth.

He said Thomassen brings a wealth of knowledge around the cannabis industry to the venture.

Hop & Hemp’s beers are priced at priced at £13 for four bottles.