Franc-ly speaking: a focus on The Loire’s reds

The Loire is best known for its classic white wines, but a seminar at the London Wine Fair in May shone a light on the Loire’s forgotten reds, and the exciting development being unleashed on Cabernet Franc.

At this year’s London Wine Fair, attendees had the rare opportunity to discover more about one of the overlooked gems of the Loire Valley – Cabernet Franc – and the exciting developments that have been bubbling under the surface for this much- maligned grape.

Hosted by award-winning wine journalist, editor and author Rebecca Gibb MW, the seminar lifted the lid on the changing face of Loire Cabernet Franc looking at the impact of typography, terroir, and climate change, as well as the new approaches adopted by today’s winemakers to draw the best out of the variety.

There are many theories about Cabernet Franc’s origins. A parent of Cabernet Sauvignon, it is thought to have originated in the Basque country, and was introduced to the Loire Valley in the 11th century, long before being mentioned by Renaissance scholar François Rabelais, under its alter ego ‘Breton’. But it has only been in the past 20 years that the grape has undergone a renaissance of its own.

It is now the predominant red variety in the Loire, accounting for 56% of all red varietals, along with Gamay, Pinot Noir and Grolleau, but makes up just 19% of the total production of wines along the 1,012km Loire River, with reds accounting for around 510,000 hectolitres or 68 million bottles, compared with white’s 133m bottle output. Production is focused in the central belt around Angers and Saumur, in the Chinon, Saint Nicolas de Bourgueil, Saumur, Saumur Champigny, Saumur Puy Notre Dame, Anjou and Anjou Villages appellations, with blends also allowed in the Touraine appellation, along with Gamay and Malbec (Côt).

This, as Gibb pointed out, is no mere coincidence, because this central area has the lowest average rainfall in the region, the highest average temperature and, along with Nantes, enjoys the highest number of sunlight hours. 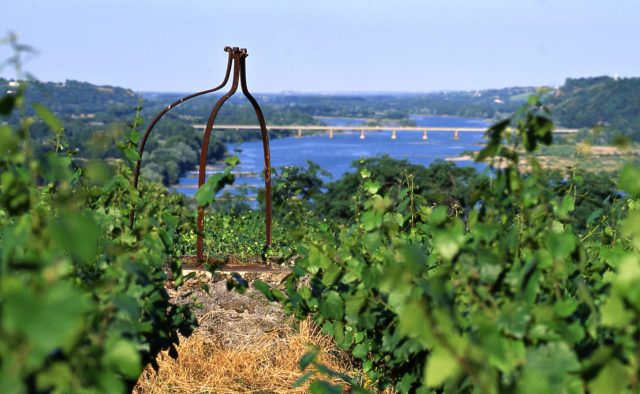 This natural advantage has already been exacerbated by climate change, and a 2012 study found that over a 50-year period between 1960 and 2010, temperatures in the growing season rose between 1.3ºC and 1.8ºC per day in the Loire, while the harvest date came forward by more than two weeks.

This, Gibb said, has produced conditions far more conducive for the variety to excel and shed its green edge by ensuring riper tannins and better phenolics. But it has been the intervention of nurture as much as nature that is responsible for the rise of a more exuberant Cabernet Franc style. Even before the 2005 collaboration between Kiwi wine expert Sam Harrop MW and regional body InterLoire, which sought to eliminate the wines’ off-putting greenness and hard tannins, producers were already starting to wake up to the variety’s potential and how to best express its red fruit, herbal, pencil lead and floral aromas more freely, Gibb explained.

Producers started to travel more widely and bring their experience back to the Loire, picking the wines earlier, fermenting at lower temperatures, adopting pre-fermentation maceration and more gentle infusion techniques to let the aromas and colour seep out more gently, better use of oxygen to soften the tannins as well as using less oak.

“Cabernet Franc’s joyful, fruity flavours don’t want to be masked by a lot of oak, they want to be put in stainless steel and express their exuberance,” Gibb said.

In terms of structure, the Loire’s Cabernet Francs are less tannic and astringent than Cabernet Sauvignon, and the wine offers more moderate alcohol and brisk acidity, which gives the wines an ageing potential of several decades.

But as Gibb pointed out, the wines need to be viewed not only through the lens of the appellation, but also through their soil types. “Sandy gravelly soils throughout the Loire tend to give early drinking, lifestyle reds. When you get to clay you get more body, more richness and more chocolately tannins, and with limestone, you get more elegance and finesse,” she explained.

The Cabernet Francs of the Loire have come a long way from the under-ripe, over-extracted and over-oaked wines of twenty years ago, Gibb concluded.

Winemakers have had the courage to wait for more phenolic ripeness to get rid of the green pepper flavours that were previously defended as a ‘badge of terroir’, and embrace a fresher, fruitier, more fragrant style that ticks all the boxes for current drinking trends and allows the variety to shine.

This article appears in the June issue of The Drinks Business