Rainey: The Finger Lakes is at a tipping point

The Finger Lakes in New York has reached a tipping point where the wines are starting to turn heads around the world, according to one leading producer in the region.

Speaking to db during a dinner in London put on to show off the diversity of the Finger Lakes, Rick Rainey, general manager of Forge Cellars, said:

“Some of the wines made in the Finger Lakes in the past weren’t interesting, but now we have enough exciting wines to make an impact both in New York and in export markets. We’re at the tipping point now and can put international events together with wines from quality producers.

“People do things with wine sometimes because it gets you a place at the table. The Finger Lakes is a small region so we have to make a noise to be noticed.”

As to Rainey’s approach at Forge, rather than try to win the hearts (and palates) of local sommeliers in New York, he has chosen to set his sights further afield.

“I never put my hook in the water in the New York restaurant scene with Forge Cellars as it’s expensive to try and win listings there. I’ve been more focused on export markets and other parts of the US.

“We’ve all been waiting for New York to wrap its arms around the wines from the Finger Lakes, which is starting to happen, fuelled by the rise of the locavore movement,” he told db.

Rainey admitted that Riesling’s reputation for being sweet has made it a hard sell in certain circles.

“Riesling is about the hardest wine you can make, as there is so much negative baggage associated with it. We need good ambassadors to tell the story of the Finger Lakes and the bone dry Rieslings we make here. 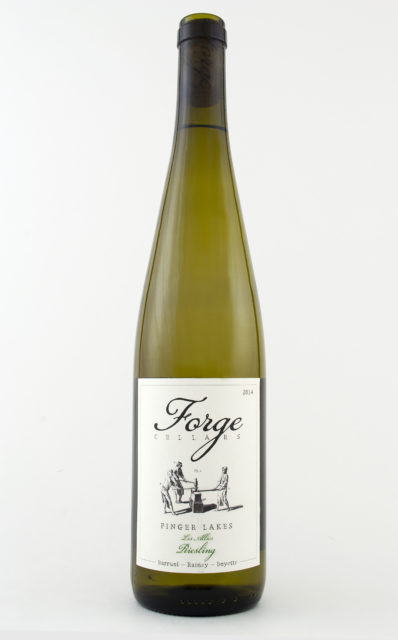 “Younger consumers are getting into our Rieslings as they aren’t tarnished by the negativity associated with the grape,” he said.

Looking ahead, Rainey believes that the region is just scratching the surface of what it’s capable of.

“We’re still growing viticulturally as a region and are learning a lot. I tend to make my wines in the same way, so the differences come from the terroir, which we’re starting to get to grips with. I get a lot of nuances from my single vineyard wines, as some soils lend a fruity aspect to them and others give a salty element.

“Pinot Noir has a lot of potential in the Finger Lakes. They are quite earthy and leafy in character, with high acidity, but you’ve got to be so careful when you’re making them. Cabernet Franc and Riesling are more forgiving – there’s not a lot of room for error with Pinot,” he said.

“There is still so much we can do in terms of developing our Rieslings. We need to keep pushing things forward and taking things to the next level by replanting at different densities and taking a more holistic approach to farming,” he added.

The Finger Lakes are a group of 11 long, narrow, glacial lakes in New York. The AVA is located in Upstate New York, south of Lake Ontario. The areas around Keuka, Cayuga and Seneca lakes contain the majority of vineyard plantings in the AVA, which produces 220,000 cases of Riesling a year.

The largest wine-producing region in New York State, the Finger Lakes boasts around 4,500 hectares of vines and 100 wine producers.