Alsace ‘closer than ever’ to imposing legal sweetness guides on labels

“We are closer than we have ever been,” said Séverine Schlumberger of Domaines Schlumberger in reference to Alsace imposing legal guides to sweetness levels in wine on labels. 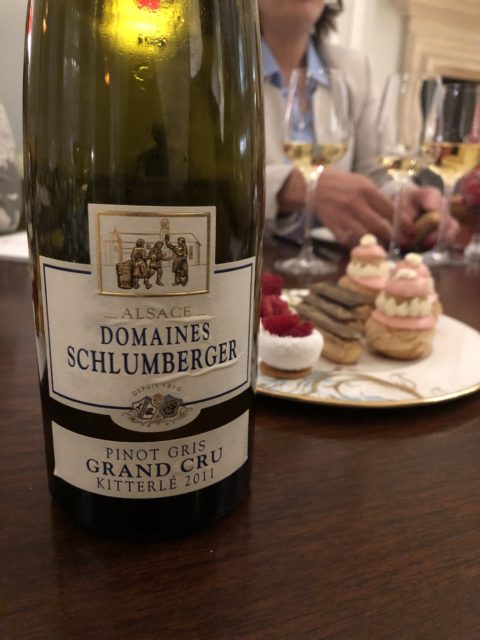 Séverine, the seventh generation of her family to manage the Alsace wine estate, said the producer had been using sweetness guidelines on their bottles for 10 years.

“We’re pushing to have them imposed by law,” she said. “The co-ops are against it as they often make sweet Riesling and they don’t like people knowing how sweet it is.”

Bottles of Domaines Schlumberger wines are ranked according to their levels of residual sugar in the following categories: dry, medium dry, medium sweet/mellow and sweet.

As a guide, Séverine said the wines in the dry category contained between 6 and 8g/l of residual sugar, medium dry wines had between 8 and 16g/l, medium sweet or mellow wines had around 16 to 40-45g/l while sweet wines were above 45g/l.

Back in 2015, it was announced that plans for the compulsory labelling of all dry Alsace wines as dry were to be put on hold. The Alsace Vintners Association (AVA) had achieved near-unanimous approval for the proposals and had planned to introduce the labelling from the 2016 vintage onwards.

The AVA submitted a file asking the INAO to impose an obligation on the labelling of Alsace dry white wines – wines with less than 4g/l of sugar, or 7g/l of sugar in wines with a minimum of 9g of tartaric acidity, according to EU rules.

Séverine was speaking to members of the wine press at a tasting at The Rosebery Lounge at the Mandarin Oriental in London. The Rosebery is currently pairing three of the estate’s Grand Cru wines with afternoon tea – the Riesling Grand Cru Saering 2015 with a selection of sandwiches, the Gewurztraminer Grand Cru Kessler 2015 with scones with jam and rose petal jelly, and the Pinot Gris Grand Cru Kitterle 2011 with a patisserie selection.

“I don’t like drinking Riesling by itself – it works so much better when it’s dry and it’s mean to be drunk with food,” Séverine added.

“Riesling is like an apple, no matter when you eat it it will always be acidic. Pinot Gris is more like a peach, an our Grand Cru Pinot Gris is like a peach that’s been left out until the end of the week – it is fruiter and tastes sweeter. Gewurtztraminer is like exotic fruit – it’s also hard to grow.”

She said that sales of her Riesling were rising year-on-year in the UK, with the country now ranked fifth or sixth in the estate’s top export markets. Domaines Schlumberger exports 65% of its wines, its top two markets being Belgium and the US.

The estate is also looking to boost its direct to consumer and cellar door sales with the opening of a new tasting room and cellar door in May at its site in Guebwiller.

Cellar door sales currently amount to €200,000 a year, equating to 5% of total sales. Séverine told news site DNA that she hopes the investment will triple this figure in the next five years.