Lincolnshire police and HMRC officials have seized around 900,000 cans of beer and 200,000 counterfeit cigarettes from an industrial estate in Grantham, a haul so large it took officers from three agencies 17 hours to count the items.

The raid took place on 27 November after a tip-off from a member of the public. It is believed to be the largest single seizure of alcohol to have ever taken place in the county.

From the video footage and images published by police, among the brands that appear to have been targeted are Polish brewers Tyskie, Debowe, Lech Browary Wielkopolski, Okocim and Browary Lubelskie as well as Carlsberg and Budweiser.

Sergeant Kim Enderby from the alcohol licensing team described the results as “spectacular” with a “mindboggling” amount of alcohol seized.

“This was a major ‘operation that we had been planning for a number of months. Everything came together on Tuesday 27 November with spectacular results. What started out as a single piece of intelligence supplied by a member of the public to Lincolnshire Police has resulted in the largest single seizure of alcohol we have ever had in the county.

“The amount of alcohol seized was mindboggling; we had officers from all three agencies on site at 10am on Tuesday morning and didn’t finish counting and removing the alcohol until 3am on the morning of Wednesday 28th November. The retail value of the alcohol seized runs into the hundreds of thousands and those involved in this enterprise have also evaded paying thousands of pounds in duty. 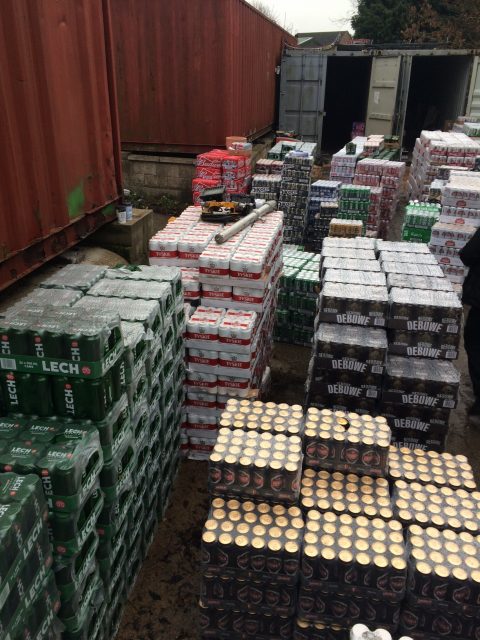 “This demonstrates that by pooling resources we still retain the ability to take really effective actions against those individuals involved in the illicit sale of alcohol and cigarettes. Having all three agencies working so closely together ensures that every angle is covered, we create the maximum amount of disruption, in the shortest possible time. We are already looking at future potential targets, so anyone involved in this activity can expect to be raided and hit where criminals feel it the most – in their wallets,” sergeant Enderby added.

Andy Wright, principal trading standards officer, added: “From a trading standards point of view we were particularly pleased with the recovery of dangerous counterfeit cigarettes destined for retail sale in Grantham, non-English labelled medicines some of which should only be available on prescription in the UK and the huge quantity of non-duty paid alcohol.

Police and HMRC have said that enquiries remain on-going, with investigations currently in place to determine stores in Grantham that have bought and sold the illegal items found inside the storage containers. Any identified businesses could ultimately lose their alcohol licences.