The gin producer, owned by Diageo, will launch its two flavoured, low-alcohol gin and tonics in bars and pubs, after the initial release of the pre-mixed drinks at supermarkets and other off-trade locations in June. 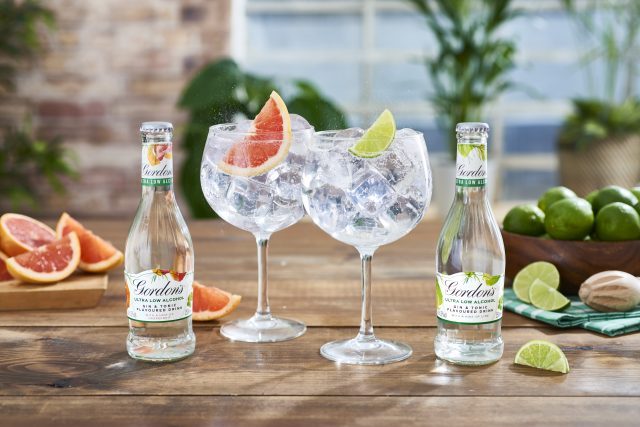 It seems the rise in demand for low-ABV drinks isn’t going to stop any time soon. As the drinks business reported earlier this year, more people are seeking low-alcohol and alcohol-free alternatives than ever before.

People are making an effort to be more health-conscious and the perceived social stigma of these drinks is far less existent nowadays than previously. 52% of people in a OnePoll funded by Carlsberg agreed that no-alcohol beer has become more socially acceptable in the past two years.

It was also found that while men are more likely to consume low- or no-alcohol alternatives at home, women were more likely to try it on a night out. And Gordon’s has taken note of this opportunity.

Their “ultra-low-alcohol” G&Ts are now available in the on-trade market. The two drinks, one flavoured with lime and the other with grapefruit, had previously only been available in the off-trade, retailing for £1.49 for a single 250ml glass bottle, or £4.99 for a four-pack.

In addition to non-alcoholic ‘spirits’, the value of non-alcoholic wine in the UK rose by 66% last year, and non-alcoholic beer by 37%, according to figures released by Nielsen in August 2017.

Hywel Evans, innovation commercialisation manager at Diageo, which owns Gordon’s, said: “We know there is a credible opportunity for branded spirits within the low and non-alcohol category, where consumers are increasingly searching for viable alternatives during those social occasions when they choose not to drink or want to moderate their alcohol intake.

“With the non-alcohol category in 22.2% category growth, we are confident that this premium low-alcohol offering will provide a great sales opportunity for licensees, particularly when many consumers are looking for low and no alcohol alternatives in the new year.”