Stefan Neumann MS is the director of wine at the two Michelin-starred Dinner by Heston Blumenthal at The Mandarin Oriental hotel in London’s Knightsbridge. He became a Master Sommelier in 2017 and three years prior reached the final of the UK Sommelier of the Year competition. Before Dinner, Neumann worked as a sommelier at Heston’s The Fat Duck in Bray for three years, having moved there from Raymond Blanc’s Le Manoir aux Quat’ Saisons in Great Milton. Neumann started his sommelier career in his homeland of Austria, working as a cheese sommelier at Meierei in Vienna. He lives in Chiswick. 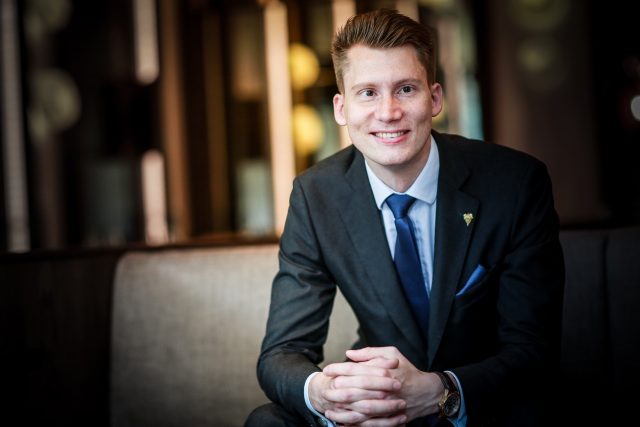 1984 and yes, it’s tricky to find wines from that year which don’t belong in a salad dressing.

What single bottle sparked your love of wine?

A 1953 Riesling from Kamptal from a boutique producer. I drunk it with my family in 2003 to celebrate my father’s 50th’birthday and my (wine) world has never been the same again.

It depends how long. Either a cup of rooibos tea or a wee dram of whiskey.

I served once two salmon dishes and had to reach over a gentleman to serve his dinner date. While doing this I lifted the second plate over the gentleman’s head and ended up pouring the entire fish sauce over him.

His hair was wet his shirt was soaked so he ended up having a shower in the bathroom and receiving a new shirt from the restaurant owner. Although I was so embarrassed I wanted to serve them till the end. His dinner date couldn’t stop laughing about it and they left very happy in the end.

If you could give your younger self advice when starting out as a somm, what would it be?

To start a few years earlier – if I did my grandparents would have seen my passion for wine.

Who has been your greatest inspiration throughout your career?

There are three musketeers: Alexander Koblinger MS, who gave me a chance; Isa Bal MS, who helped me to understand the world of wine; and João Pires MS – there’s no school like old school.

What is the best meal you’ve ever had and what wine did you drink with it?

At Aponiente in Cadiz, which is housed in a 19th century tide mill and run by Angel Leon, known as ’the chef of the sea’. His inventive cooking paired with a whole line up of Krug Champagne was out of this world, particularly Krug Grande Cuvée Edition 160 from Jeroboam.

If you could own a vineyard anywhere in the world, where would it be?

Eden Valley in Australia. I’m in love with the perfumed and floral style of Shiraz from Eden and would love to produce Riesling with an Austrian twist.

If you weren’t a sommelier, what would you be doing?

I love working with wood so most likely something along that line.

Who is the most memorable customer you’ve ever served?

Brad Pitt and Angelina Jolie. His suit looked amazing and I never thought I would stutter that much in front of a woman.

If you could only drink wine made from one grape for the rest of your life, what would it be?

Being Austrian I’d have to say Riesling, without a shadow of a doubt. I’ve had so many great bottles over the years.

What are the top three wines on your bucket list?