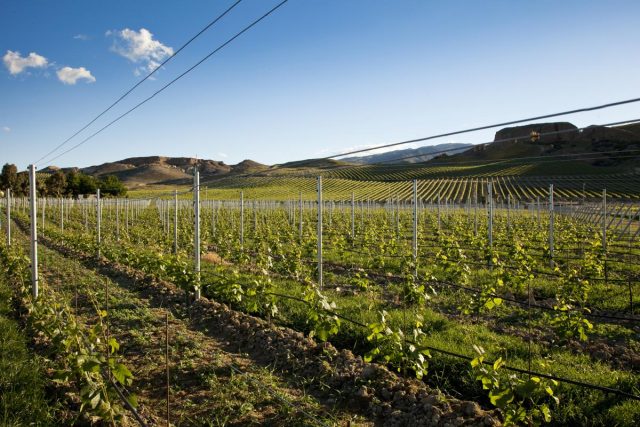 Speaking at a NZ Wine masterclass in London last week, Walter explained that while it takes three years to convert land to biodynamics, vines take seven years to properly demonstrate the change.

“It took us three years to convert 32 hectares of vines, but I really felt it took seven years for it to manifest itself in the vines. The three year-certification was more like a cleansing period as the vines adapt to the changing nutrient source,” he said.

Felton Road, based in Central Otago, adopted organic practices in 2002, moving to biodynamics in 2003.

Walter explained that he’d tried biodynamic wine while working in Burgundy in 1996 and could clearly taste the difference.

“I was initially a bit scared of the voodoo, but what I like about biodynamics is that you’re focused on your whole property being an enclosed ecosystem, rather than just the vineyard itself.

When asked why he felt that it took seven years for the vines to fully adapt, he said: “Vines become better balanced, not so vigorous. They become used to the undervine cultivation and the different method of accessing nutrients from enlivening the soil microbial population. Ripeness happens earlier and more readily at lower sugar levels resulting in lower alcohols. The vines seem to be more resilient to extremes in weather. The resulting wines are more expressive of their site through greater transparency and finesse”.

Sharing Walter’s passion for the practice he said that he wished the whole of New Zealand was organic and biodynamic.

“We converted to biodynamics in the late 1990s,” he said. “It wasn’t a popular decision and I was probably a bit arrogant at the time in insisting that we changed, but I’m very glad I did.

“I don’t mind all the mumbo jumbo. The climate is changing radically and wherever I travel to for work I see it changing.

“For example, we (New Zealand) had lots of rain this year and it seemed like we had 10 years’ worth of rain in two weeks.

“I get irritated by the fact that chemical farming is called ‘conventional’. That’s bullshit – we’re the ones that are truly farming conventionally.

“That said, it can be very tempting when things get tough to spray or go against the practices. However, if it’s matter of principle, I believe we have to stick to it no matter what.

“There’s a theory that organic and biodynamic farming makes the skins on grapes tougher while flavour maturity can be achieved at lower sugar levels”.

The lower sugar, and therefore lower alcohol levels, can sometimes be a problem.

In 2016 the EU blocked the sale of Felton Road’s Bannockburn Riesling as it contained less than the 8.5% ABV limit set for still wines.

The 2015 vintage was released with an ABV of 8.44% and was sent back to the winery. At a time when lower ABV products are becoming increasingly popular, will the legal limits be reduced?

Walter said: “The alcohol oscillates around 8.5 to 9.5% so we are not always affected. I can’t see the regulations changing anytime soon. There will be so much bureaucracy to wade through and it probably only affects a handful of wines so we are not holding our breath. You would like to think though that there is someone who would see the wisdom in allowing “healthy choice” lower alcohol wines. NZ Winegrowers have brought it to their attention”.

Felton Road’s Riesling only makes up 10% of its total production with the winery also producing Pinot Noir and Chardonnay. It exports to over 35 countries with Australia and the UK as its largest markets.

The Organic Winegrowers NZ (OWNZ) was established in 2007 and in 2017 over 10% of NZ wineries had organic certification to make organic wine with 12% of all growers boasting an organic vineyard.