Bo Barrett: Vultures have circled but Château Montelena is not for sale

Ten years after his father famously almost sold Napa Valley’s Château Montelena to Michel Reybier of Bordeaux, co-owner Bo Barrett says the winery made famous by the Paris Tasting of 1976 is not for sale, “even though the vultures started circling last August when my mother died.”

“They’ve got all the money in the world, and they want what I’ve got,” Barrett said in an interview yesterday before a five-decade retrospective tasting in New York of Montelena Cabernet Sauvignon, “but I don’t want what they’ve got.”

His father, the late Jim Barrett, founder of Montelena, had almost completed the sale in 2008 of the Calistoga winery for a reported $120 to $150 million to the owner of Cos d’Estournel when the Great Recession killed the deal.

“To my father, it was the deal of a lifetime, and he didn’t want the government to confiscate the property through inheritance taxes,” says the younger Barrett, still sporting a small, perfectly grey, soul patch under his lower lip.

Much has changed in the five years since his father died in 2013, Barrett said. “For one thing, we switched from being a kingdom and became a republic,” he laughed.

Each of the wines was sound, and each vintage tasted as though it had more years to age. Surprisingly, there was a great continuity of style between vintages in spite of the addition of better machinery, new oak barrels, drip irrigation and the addition of hillside estate vineyards “once we began to make some money.”

“There were only three of us working at the winery at the time of the Paris tasting,” he says, “and my father was still practicing law in Los Angeles.” 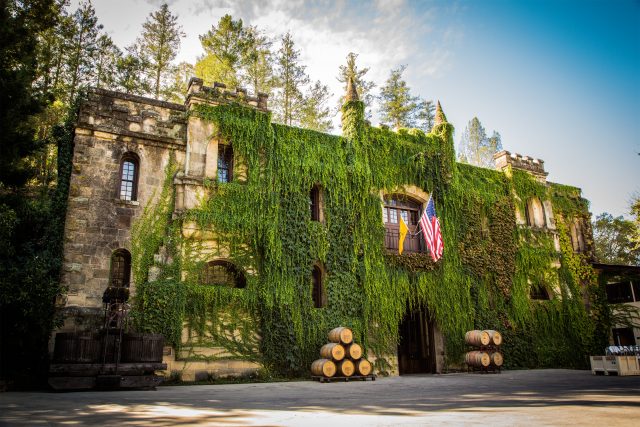 The grapes for Montelena’s winning wine, a Chardonnay to go along with Stag’s Leap Wine Cellars’ winning Cabernet, were actually purchased from a Sonoma vineyard.

“Mike Grgich [who was winemaker at the time for Montelena] bolted the day after the tasting to start his own winery,” Barrett said, “and he was replaced by a great winemaker that few people might remember – Jerry Luper.”

Initially reluctant to work at the winery and for his father, Barrett eventually got his degree in winemaking from Fresno State University and toured southern Europe in a VW bus visiting wineries. Tutored by Luper, who left in in 1982 after a five-year tenure to become a partner at the new Domaine Bouchaine [now just Bouchaine], the younger Barrett was elevated to winemaker at Luper’s recommendation.

“I was reluctant at first, but my father and I agreed that he would treat me with the same professional respect that he did Luper, and I would treat him as the boss,” Barrett said.

He has continued since either as winemaker or winery director at Montelena. In spite of his self-cultivated surf-and-ski playboy image perpetuated by the movie about the Paris tasting – “Bottle Shock” – Barrett was a good student, and “I usually was first to show up at the winery and the last to leave” as a young man.

Currently, Barrett’s son, Seamus, works as the winery’s attorney and has one daughter with fellow winemaker Heidi Peterson Barrett, Chelsea, who is a winemaker for Joel Gott, and a second daughter, Remi, who works in sales for the couple’s separate winemaking venture, Barrett & Barrett.

“We started out to make European style wines, and we’ve never stopped,” Barrett said, noting that Montelena Cabernets are usually 14% alcohol or under, separating them from what he calls Napa’s “cabernet cocktails” that often range to 16%. He also noted fellow Napa Valley winegrower Chuck Wagner’s statement that his Caymus reds are ready to drink on release and don’t need cellaring.

“People ask us why don’t we use the Caymus model” Barrett says, “and I say, ‘well, somebody has to make wines that will age'”.