Super Tuscan Ornellaia has had the “charisma” of its 2015 vintage captured by South African artist William Kentridge for the 10th edition of its ‘Vendemmia d’Artista’ collection. 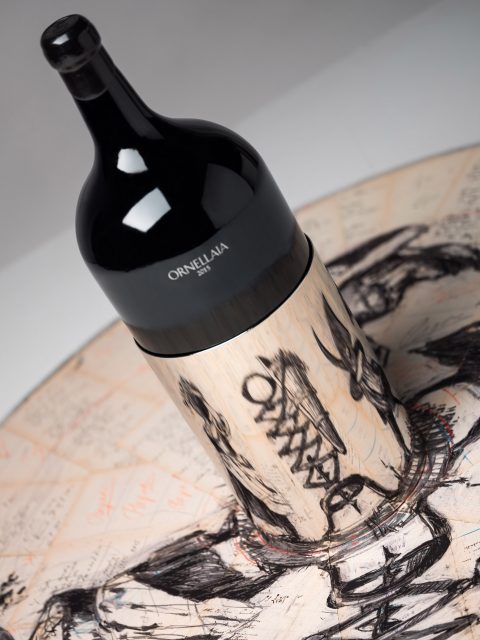 The vintage has been described by the estate as, without doubt one of the great Ornellaia vintages”, with, “great texture and intensity,” that was the result of a, “very regular, almost textbook” growing season said winemaker Axel Heinz.

Heinz added: “After a normal, rainy but mild winter, with just a couple of days with temperatures below zero, bud-break arrived right on schedule in early April. Spring was characterised by dry, sunny weather, ideal conditions for regular vine growth, which culminated in a rapid, uniform flowering in late May.

“Starting in June, water stress gradually became an issue, and, in fact, July will be remembered as particularly scorching and dry, with maximum temperatures that exceeded 30°C every single day of the month. That heat, combined with the absence of rains, made us fear for an interruption in the ripening process and possibly an early harvest.

“Luckily, rain arrived around the 10 August, and the abundant rainfall allowed the grapes to continue ripening. It also brought much cooler conditions during the final stages, with this cool yet sunny weather persisting throughout the harvest. That allowed us to pick very deliberately, waiting for each vineyard to achieve perfect ripeness, which meant a combination of crisp, lively aromatics with optimal phenolic ripeness, and with abundant yet silky tannins.”

Ornellaia approached South African artist William Kentridge to express the “charisma” it found in the wine, both a for a limited edition set of large bottles that will be auctioned for charity and a special label that will be on one bottle in each case.

Kentridge’s work focuses on the process of making wine, especially the harvest, with various viticultural and winemaking tools depicted as people.

He explained: “The secateurs come from a memory of the one occasion I took part in a Tuscan vendemmia, when with my family I spent six months in San Casciano outside Florence.

“This made me understand the human labour involved in making the wine; though what I remember most strongly is the pleasure of the lunch prepared in the vineyards by the local farmer’s wife.

“A depth of flavour made by the combination of work and terroir. The aspects of winemaking that combine both manual craft and mechanical processes suggested the transformation of people into machines and machines into workers.

“This is part of an on-going series of drawings and other work about human labour. The drawings are done on pages from various old Italian cash books found in flea markets and second-hand shops in the Tuscan area.”

Nine lots of the large-format bottles, with a Salmanazar as the central piece, will be auctioned by Sotheby’s at the Victoria & Albert Museum in London this May, with proceeds from the sale going to the museum.