2017 was a rollercoaster ride of a year where Brexit, Donald Trump and Harvey Weinstein dominated the headlines. 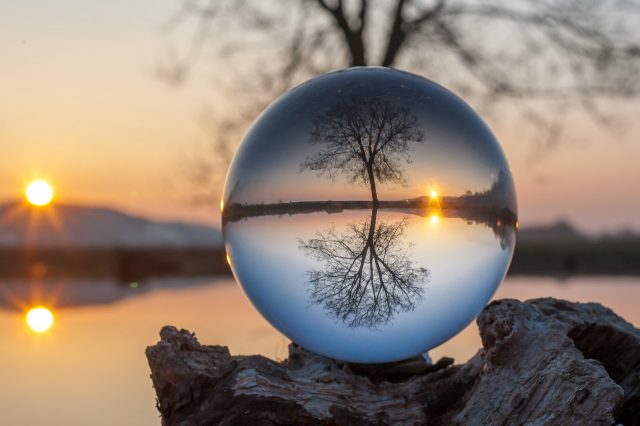 London had a particularly tough time last year, with both the tragic Grenfell Tower fire and the Borough Market terrorist attacks taking place in June.

The London on-trade also faced one of its most challenging years to date, with rising rents and the dip in the value of the pound putting strain on the industry, leading to a number of high profile closures including Paradise Garage and HKK.

But us Brits showed true grit – restaurateurs kept calm and carried on in the face of adversity, and while the capital lost a number of beloved restaurants, it also welcomed an array of exciting new venues from both trusted names and rising stars.

As is customary at db, at this time of year we like to look ahead and outline what we believe will be the key food and drink trends to sweep across the UK this year.

While the pace of change is lightening quick in London in particular, making trends hard to predict, we’ve come up with ten we think will make an impact this year, from pink gin and chef’s tables to the rise of veggie and vegan cuisine. 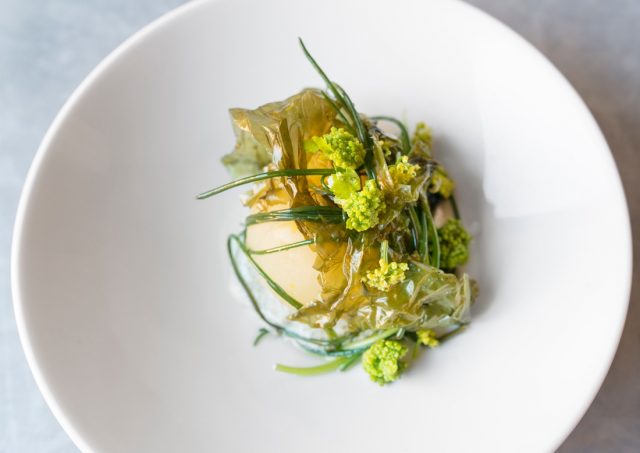 The trend for ditching meat, or at least eating less of it, has been bubbling away for a while now. In 2015 one of France’s most decorated chefs, Alain Ducasse, made the audacious move of turning his acclaimed eponymous restaurant at the Plaza Athénée hotel in Paris meat free – and in meat mad France no less.

We predict that 2018 will be a marker in the sand when veggie and vegan cuisine goes mainstream. Once frowned upon as the preserve of sandal-wearing hippies, diners are becoming more conscious of what they eat and how it impacts on the environment.

Documentaries like Cowspiracy and What the Health have flagged up the benefits of a plant-based diet, and vegetarian, vegan and plant-based restaurants are on the rise on London, from Camilla Fayed’s Farmacy in Notting Hill and Essence in Shoreditch to popular newcomer Ceremony in Tufnell Park, which bills itself as a restaurant where the dishes just happen to contain no meat.

This year will see the opening of New York vegan café By Chloe in Covent Garden. But meat free food needn’t always be virtuous – this year will also usher in the rise of ‘dirty’ vegan venues spearheaded by the likes of Temple of Seitan in Shoreditch, which specialises in vegan fast food. 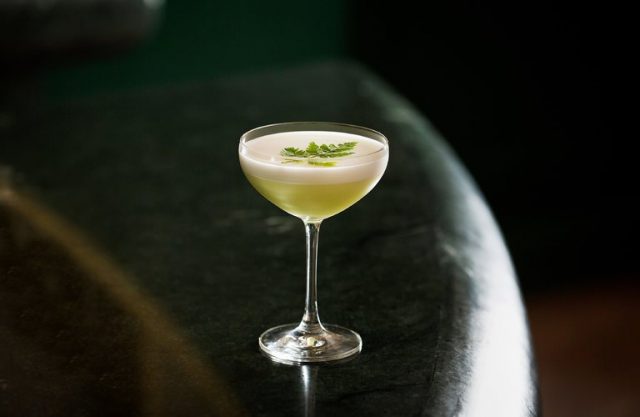 With millennials drinking significantly less than their parents, it is no longer seen as uncool or unusual to be t-total. While many of us only just manage Dry January, last year saw the launch of Club Soda, a ‘mindful drinking movement’ that aims to remove the stigma associated with not drinking in social situations.

The success of non-alcoholic spirit Seedlip, created to solve the dilemma of what to drink when you’re not drinking, proved that people no longer mock mocktails. Bartenders are taking their non-alcoholic offerings increasingly seriously, rather than treating their virgin cocktail list as an afterthought.

Ryan Chetiyawardana offers four non-alcoholic cocktails at Dandelyan on the South Bank, including the Apple Sourz-Less (pictured) made with Seedlip, peas, apples and pine syrup. Across town, The American Bar at The Savoy serves a quintet of non-alcoholic cocktails, including the Art Deco, made with Seedlip Spice, eucalyptus, peppermint syrup, citric acid and soda water. 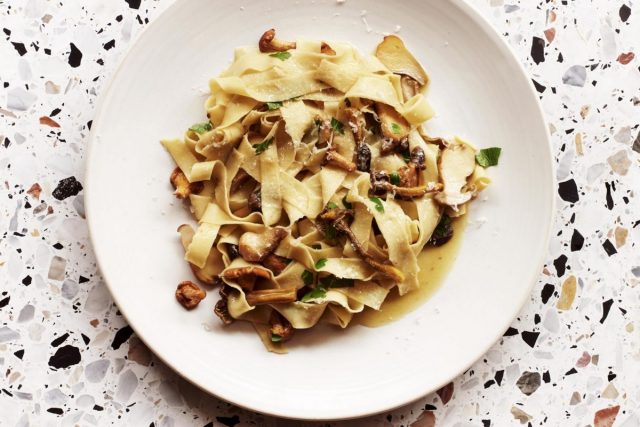 Keeping its prices deliberately low proved a winning formula for Padella, which has turned the capital into a city of fresh pasta obsessives. We predict London’s newfound love of carbs will grow this year, as restaurateurs open pasta bars with reckless abandon in the hope of emulating the success of Padella, Pastaio in Soho, and Palatino in Clerkenwell.

While choosing a name beginning with ‘P’ may be wise, the likes of Luca in Clerkenwell from the boys behind The Clove Club, Trullo in Highbury and Bermondsey newbie Flour & Grape are also leading the pasta charge. 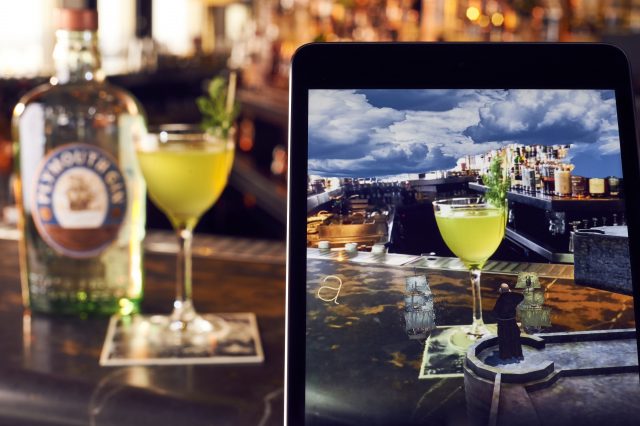 Bartenders are a restless bunch. In a bid to create exciting new experiences for low attention span Londoners, some of the top mixologists in the capital have been seeking inspiration from science and technology, successfully weaving both into their serves.

To be taken to another drinking dimension, all guests had to do was aim their smart phone at the cocktail’s coaster, which would trigger the artwork to come to life on their device.

Taking things a step further, in November scientists at the University of Singapore developed a virtual cocktail that digitally simulates multisensory flavour experiences. They did so by adding scent cartridges and micro air pumps to the base of the glass, allowing users to create their own virtual flavours, smells and colours to enhance the existing ones in the drink.

And if that wasn’t impressive enough, LED lights on the glass can change the colour of the cocktail, and two silver electrodes on the rim of the glass give off salty, bitter and sweet tastes when the drinker touches them with their tongue. 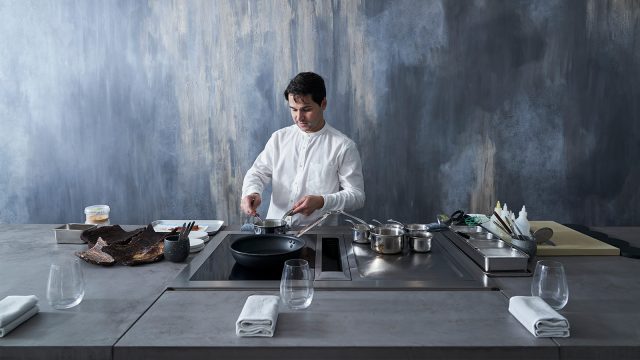 As diners seek ever more personal and bespoke food experiences, chefs are responding with development kitchens that are designed to feel like you’ve been given a backstage pass to all the exciting behind the scenes action.

Chef James Knappet pioneered the idea years ago at his Kitchen Table concept behind Champagne and hotdog specialist Bubbledogs in Fitzrovia. This year will see more chefs joining the party. Among the most interesting will be Simon Rogan’s Aulis, an eight-seater no menu venue in central London.

Guests pay £250 a head and are treated to a tasting menu of Rogan’s latest creations alongside wines designed to harmonise with the flavours in the dishes. This is the nearest you’ll get to a Rogan dinner party, who will be on hand to not only cook his mind-blowing dishes, but explain the thought process behind them.

Another chef to open up their kitchen is Wahaca’s Thomasina Miers, who recently launched Wahaca Test Kitchen in Shoreditch, where diners can try her Mexican-inspired dishes before they make it to the main menu or get pulped. 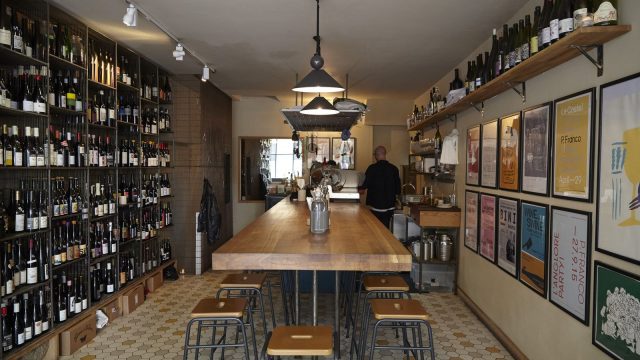 With the London on-trade becoming ever more competitive, venues are having to get creative in order to succeed. As a result we’re seeing an emergence of edgy new wine bars that double as shops and restaurants serving exciting small plates crafted from local, seasonal ingredients.

P Franco in Clapton (pictured), run by Liam Kelleher and James Noble, the directors of Noble Fine Liquor, epitomises this new breed of hybrid venue. While predominantly a wine shop with a small bar that focuses on minimum intervention natural, organic and biodynamic wines, it was also voted the London restaurant of the year last year by Eater

The Laughing Heart in Hackney is a similarly multifaceted beast, boasting a killer wine list of drops made by small growers, a wine shop and restaurant space serving a contemporary take on British cuisine. Meanwhile, Yield in Newington Green is a deli and wine shop by day and wine bar by night that champions artisan wines from Spain, France and Portugal.

Even more niche is Newcomer Wines in Dalston, a wine bar and shop specialising in esoteric Austrian wines, the majority of which are natural, served alongside small plates like celeriac tagliatelle. We expect this trend to gather pace this year, with East London remaining at the epicentre. 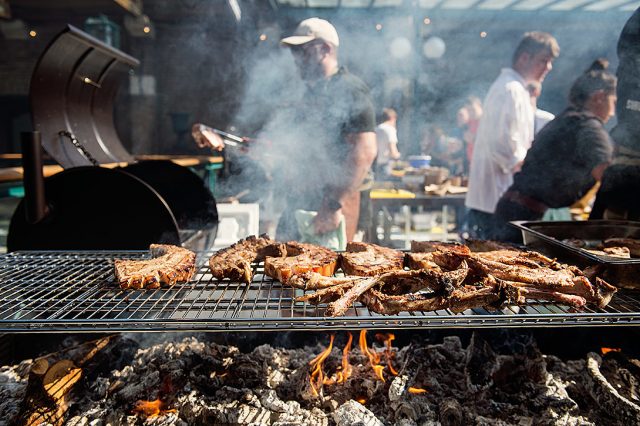 Chefs have been busy taking things back to basics with wood-fired cooking, which will catch fire in the capital this year as the trend explodes to incorporate all kinds of cuisines.

While venues championing barbecued meat like Smokestak in Shoreditch and Temper in Soho having pioneered the idea of cooking over hot coals, a number of new London openings will be shining a light on wood-fired delights. 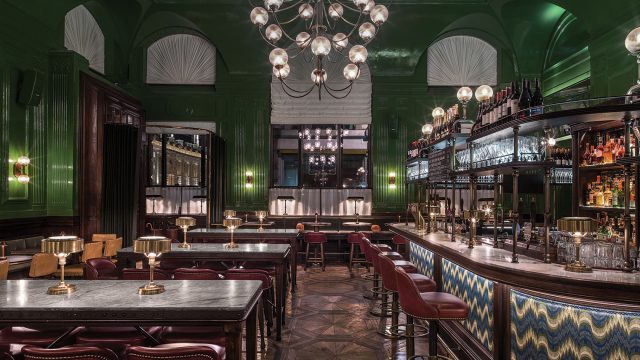 Gastropubs are having a bit of a moment in the capital, and are being given the star treatment. Leading the charge is The Wigmore, a ‘luxury’ gastropub with food by Michel Roux Jr inside The Langham hotel in Marylebone, which boasts plush Art Deco interiors, including emerald green walls and gold table lamps, and serves the likes of paprika-glazed short rib with a bone marrow crumb, and masala-spiced Scotch eggs.

Meanwhile, late last year Layo and Zoe Paskin, the dynamic duo behind The Palomar and The Barbary, took over The Blue Posts pub on Rupert Street in Soho. Giving it a dash of their signature magic, the venue boasts The Mulway cocktail bar on the first floor and Evelyn’s Table, an 11-seater kitchen counter located in the old beer cellar. 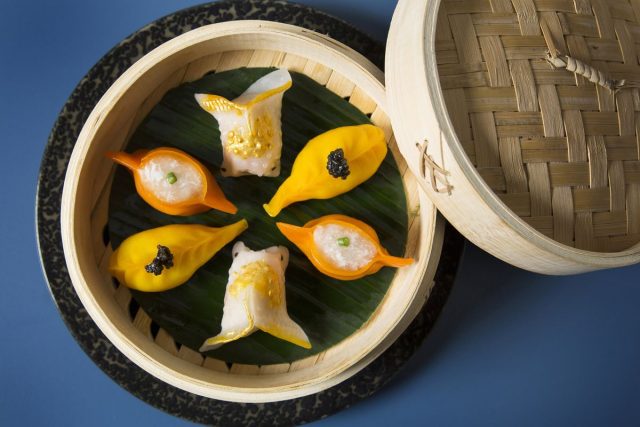 While London has already gone wild for Vietnamese steamed buns rammed with pork and peanuts at Bao in Soho, where you’ll still find queues snaking round the block, we believe 2018 will be the year where the capital goes mad for dumplings.

Spearheading the movement is London Bridge newcomer Duddell’s – a sister venue to the Michelin-starred Hong Kong original, which is already charming diners with its adorable goldfish-shaped dumplings.

Also set to cause a stir this year is Taiwan steamed dumpling institution Din Tai Fung, which will open its first site in the capital this year, adding to spin-offs in Australia, Hong Kong, Singapore and Japan.

Meanwhile, Chinese/Japanese fusion restaurant Mei Ume at The Four Seasons in Trinity Square serves a sublime dim sum platter, including one prettified with gold leaf, and all-day dim sum teahouse Yauatcha in Soho is the queen of steamed delights. 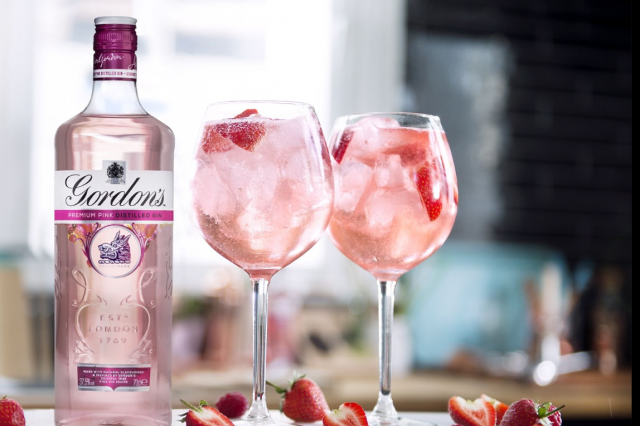 Last but not least we predict big things this year for pink gin. Latching on to the popularity of millennial pink, everyone from small producers to big brands seem to be jumping on the pink gin bandwagon.

Gin giant Gordon’s got in on the game last smmer with its own rose-tinted expression infused with raspberries, strawberries and red currants based on a recipe from the 1880s. Proving the trend has gone mainstream, both discount retailer Aldi and luxury department store Selfridges are selling Gin Lane 1751 Victoria Pink Gin, which boasts a pretty vintage label, like hotcakes.

Other players in the pink gin game include Warner Edwards, whose expression is made with Queen Victoria rhubarb; Edinburgh Gin, which also uses rhubarb for its pink offering, Edgerton, whose pink gin is rammed with pomegranate and orange peel; and the original pink gin Pinkster from Cambridge, which makes a hero of raspberries in its blend. The trend is already all over Instagram #obvs.