Despite challenges for the UK drinks trade following the Brexit vote, South Africa’s Distell has made the British market a focus for future sales growth.

In an interview with the drinks business last year at the wine, cider and spirits group’s new offices on the outskirts of London, Distell’s MD for Europe, Fraser Thornton, made it clear that he wants to expand the global company’s overall turnover through growing its UK business specifically.

Considering the company’s worldwide footprint, Thornton, a Scot with a strong spirits marketing background, tells db that the majority of Distell’s revenues come from its domestic African market, making up 80% of the group’s turnover.

The UK, he explained, is “very small” for the company, accounting for around 2.5% of the remaining 20%.

And, it’s because the group has such a small presence in the UK, a major drinks importing and consuming market, that Thornton is hopeful that the island nation will provide a key sales boost for the global business.

Indeed, the group set a target last year to double Distell’s turnover within five years – “and we are on track so far”, says Thornton.

To ensure that Britain plays a key part in delivering such growth, Distell has taken its distribution in-house in the UK, and put together a new team of brand managers based at a newly-upgraded space in Richmond, making access to Heathrow airport easy – this is an important element for this office, which also serves as Distell’s European hub. (Half the company’s export business stems from Europe).

But why the focus on the UK now? After all, this is a time when financial uncertainty following the Brexit vote is high, and per capita alcoholic drinks consumption in the UK is falling, albeit slowly.

It’s also a period when drinks markets such as China and the US are regularly promoted as presenting the greatest possibilities for growth.

“So, in the bit of the world where we sit – which is Europe – we say to ourselves, ‘how can we play a part in that growth ambition?’ What markets can deliver double digit annual growth in revenue and our earnings?’

And if you look at size of UK market in all the categories we operate, and our relative value share, then that’s what drove our decision to focus on the UK.”

For example, Thornton says that Distell – which owns Savanna cider – is the second largest cider producer in the world, but the Savanna brand is “less than 1% of the UK cider market; we are just on the map, but no more.”

As for wine, despite the fact that the group, through its Nederburg, Two Oceans and Fleur du Cap brands, represents around one third of South African wine exorts, it only has 4% of the UK South African wine category. “We are substantially under-indexed,” sums up Thornton. 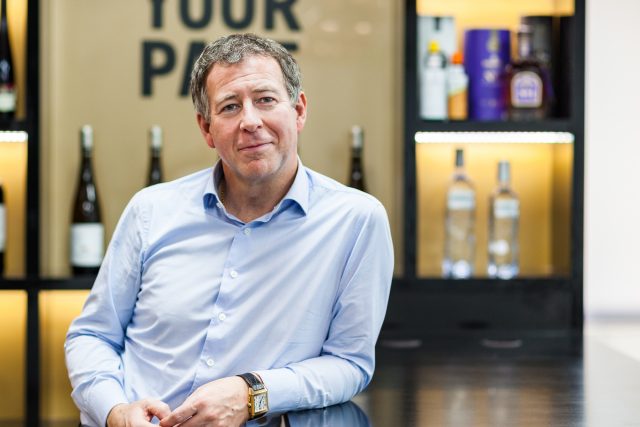 But what about the impact of Brexit?

“Even in times of uncertainty opportunities emerge and, with the advent of Brexit, just as we are putting our best foot forward and investing in the market maybe others are thinking ‘I’m worried about the UK’ and taking a backward step,” he says.

Later on he adds, “And I don’t’ think anyone knows what Brexit will mean and when it will mean it… so our view is let’s just get on with things.”

He also stresses that Distell, through its broad base of brands, has the foundations to succeed in the UK whatever the economic circumstances.

“This is not a blind leap of faith… because of the breadth of our portfolio we already have the infrastructure in the market.”

He adds, “We are one of the few [big multinational drinks companies] still doing wines and spirits – Diageo got out of wine, but we are in it for the long term, and this means we speak to all category buyers.”

And it’s wine and cider, rather than spirits, that offer the greatest potential for growth, believes Thornton.

In terms of earnings, wine is around 20% of the UK business, which Thornton wants to double to 40%, while cider too, he wants to boost significantly.

“This year we are investing behind Savanna [in the UK] like never before,” he says, sensationally.

More generally, he observes, “The two categories of products where the growth opportunity is substantial for us is wine and cider, and Savanna we see the opportunity for a step change.”

As for spirits, which presently represents 40% of revenues for Distell in the UK, he see “less obvious” potential for major sales increases, but comments, “we will continue to grow [spirits], but I don’t see exponential growth.”

And, acquisitions are unlikely to be a route to expanding Distell’s footprint, according to Thornton.

“If we have challenges as a business it is not around the number of brands we can offer the trade, it is around focus and the right market, and I don’t see widening the number of brands as a helpful step – our big job is on driving the right activities; we see a lot of growth opportunities just with better execution.”

Not even a gin brand, which is perhaps notably absent from the spirits portfolio bearing in mind this category’s resurgence in the UK?

“We are not looking to fill a gap… so no gin, and that goes back to the fact that we’ve got enough to be getting on with, and with more brands just comes more complexity… we certainly don’t need more brands to achieve what we need to achieve.”

Indeed, since meeting Thornton in the UK, it was announced that Distell was selling its Cognac brand Bisquit to Campari, boosting the Italian company’s presence in Asia and the US.

This is perhaps part of a move to increase Distell’s focus on Europe, and within that, specifically the UK market for the group’s wine and cider business.

Concerning Distell’s decision to take its brand management in-house in the UK, ending its contracts with SHS, Cellar Trends and Brand Phoenix, Thornton points out the benefits of being in full control.

“It is really about our ability to talk to the trade from a position of knowledge and strength. For the rest of our European business we rely on distributors so we are very familiar with the model, and how to manage distributors and what it takes to motivate them.

“But the growth opportunity we see across the whole portfolio in the UK market gave us the opportunity to support our own selling structure in the UK – and if you can, then ultimately it is the best thing to do, because no one will really believe in your own brands in same way as your own people.

“And I believe the trade benefits from that, because the buyers get engaged with people who can talk very knowledgeably about what they are selling.”

Despite such optimism, surely Thornton harbours some concerns about achieving such high levels of growth in the UK?

“If we execute what we’ve got planned, and we execute it well, then we shouldn’t have any difficulty hitting our targets – and I do think it is all about execution for us. There are some parts of business where scale helps, but actually execution isn’t one of them – it is about the attitude of your people, which is why we have worked so hard at recruitment.

“If we bring in people with the right attitude, and give them the right tools, then there is no barrier to being the best, even if Distell is not the biggest… So, if we execute our plan exceptionally well, then we will meet all our targets.”

Indeed, as he points out, the combination of Distell’s global might and relatively small presence in the UK is an advantage, because it means that the business can meet the needs of all types of customers in the UK, from the biggest drinks retailers to the smallest fine dining establishments.

At present, however, Distell is a big player that’s small on scale in Britain. But that looks to change in 2018 – and to the benefit of this business as a whole.

Fraser was promoted to lead the European division of Distell in July 2015, integrating Burn Stewart Distillers, Bisquit Cognac and the European commercial teams. He holds a degree in marketing and economics and qualified as a Chartered Accountant with PricewaterhouseCoopers where he worked for seven years.

Fraser joined Burn Stewart Distillers (‘BSD’) in 1996 as Business Development Manager for North America and held a number of other commercial roles including UK sales manager and global marketing manager prior to the company’s acquisition by CL Financial (a large, privately-owned Trinidadian-based conglomerate) in 2002, when he became Sales and Marketing Director, before being appointed as MD in 2006.

In 2007, Fraser took on the role of MD of CL Financial’s European spirits businesses, embarking on a plan to sell off non-core assets and simplify commercial structures.

This was successfully completed by mid-2009 and delivered the required business improvement in terms of operating performance.
In mid-2009 CL Financial required Trinidadian Government intervention to support its liquidity position and this effectively suspended the next phase of investment which had been planned for BSD. In early 2010 Fraser was seconded by the Government controlled operating Board of CL Financial to the position of acting CEO of Angostura, one of the larger operating companies within the CL Group. Angostura, a public company in Trinidad, had suffered from similar issues as many of the European businesses, but under his direction Angostura was re-financed and a successful new strategy put in place.

In January 2011 the CL Board got into a major dispute with the Board of their largest drinks asset, Lascelles de Mercado, a Jamaican public conglomerate, with Wray & Nephew, owners of Appleton Rum, its largest asset. Fraser was seconded to replace the CEO and develop an exit plan for CL. Over the next two years, he sold off non-core assets before running a lucrative sale process for the remaining group assets, which was completed in January 2013, generating significant value for CL, which convinced them to sell their remaining European assets, the first of which was the sale of BSD to Distell in April 2013. Fraser also led the BSD process and returned to Scotland to make the transition with Distell.

A keen squash player, Fraser has stayed at Distell because of the ‘wonderful, diverse portfolio of brands all of which have strong growth opportunities.’ To realise those opportunities, his priority has been to invest in people.

In his own words: ‘I am very focused on developing our business for the foreseeable future. The future will look after itself, but eventual retirement will include taking the time to enjoy the brands I have invested so much of my life building – responsibly, of course…’