The Khamriyyat or collected wine poems of one of early Islam’s most celebrated poets, Abu Nuwas, are to be released with a new English translation next month.

Although his body of work has been studied and explored as works in their own right and set against the wider context of Arabic and Persian poetry of the early Middle Ages by various scholars, the ‘wine songs’ rarely appear in English as unabridged books of poetry.

The Khamriyyat has been translated by British journalist Alex Rowell and will be released next month (December) in a book entitled: ‘Vintage Humour: The Islamic Wine Poetry of Abu Nuwas’.

Rowell told the BBC that although they were an important part of the canon of Arabic and Persian poetry, what had also attracted him to the poems during his own Arabic lessons was that they are, “part of humanist literary heritage. You do get the impression that these are contemporary poems as much as they are 1,200-ear old poems.”

Born in the 8th century AD to an Arab father and Persian mother, Abu Nuwas rose to fame in the capital of the Abbasid Caliphate – Baghdad.

Occasionally imprisoned by his patron, the Caliph al-Amin, for both his scandalous writings and hell-raising actions on wine, parties and sex (Rowell refers to him as the Rochester or Byron of his time), Nuwas eventually died in prison in 814AD, possibly poisoned on the orders of the puritanical caliph Al-Ma’mun, al-Amin’s brother*.

Although he is known for approaching wine in a number of amusing and ribald ways and as a channel for satire, many of the poems he wrote either directly or indirectly tackle the theological debate within early Islam as to whether wine was haram (forbidden) – with Nuwas very clearly of the opinion it was not.

A stanza from one such poem is written as a rebuttal to those who tell him he should not drink wine:

“Shall I spurn it, when God Himself hasn’t
And our own caliph shows it veneration?
Superlative wine, radiant and bright
Rivalling the very sun’s scintillation
While we may not know heaven in this life
Still we have paradise’s libation.” 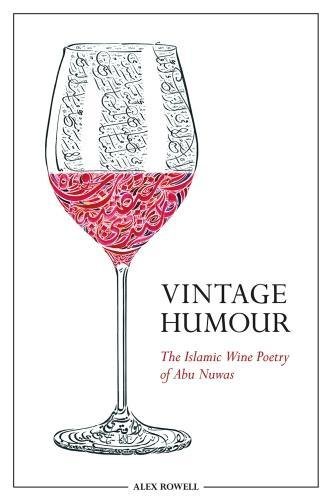 suggests that if an older vintage had a tongue to speak it would be an eloquent matriarch regaling listeners with, “tales of ancient nations”.

The poems also cast a little light on the Christian, Zoroastrian and Jewish population of Baghdad at the time, which were sizeable**, and many poems take place in their taverns, which clearly Nuwas was aware of if not acquainted with.

Later an inspiration for other Arab and Persian poets not least Omar Khayyam whose own musings on wine compiled in his ‘Rubáiyat’ are perhaps better-known to English speaking orientalists, Nuwas is nonetheless one of the Arab world’s most celebrated poets – even if some of his oeuvre isn’t looked on any more kindly by stricter adherents of Islam today than it was in the 9th century.

On this latter point however, speaking to the BBC, one leading scholar on Nuwas, Philip Kennedy, said it was, “useful these days to show – when extremists call for a re-establishment of the caliphate – that in the glory days of the Abbasid caliphate Islamic society tolerated voices such as the libertine chants of Abu Nuwas and his cohort.”

The book will be released on 28 December this year.

*Who overthrew his sibling in a civil war in 813AD.
**Indeed Iraq was home to one of the Middle East’s largest Jewish populations until after the First World War.