Tracking the ups and downs of the currency and fine wine markets over the past few years, it’s surely no coincidence that they match up rather closely and with that correlation come opportunities. 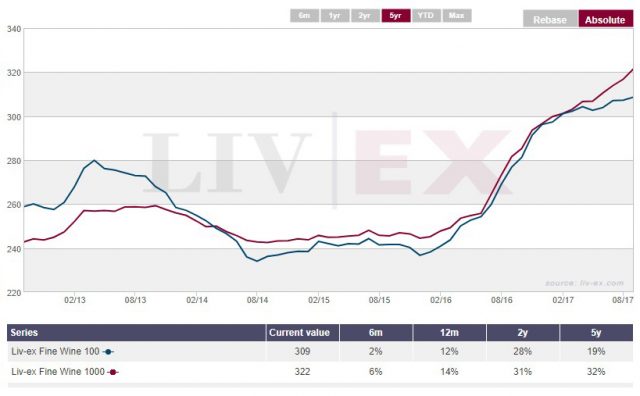 Whichever way you look at the above five year chart, the indices it records appear to bottom in July 2014, before taking off in earnest early 2016. 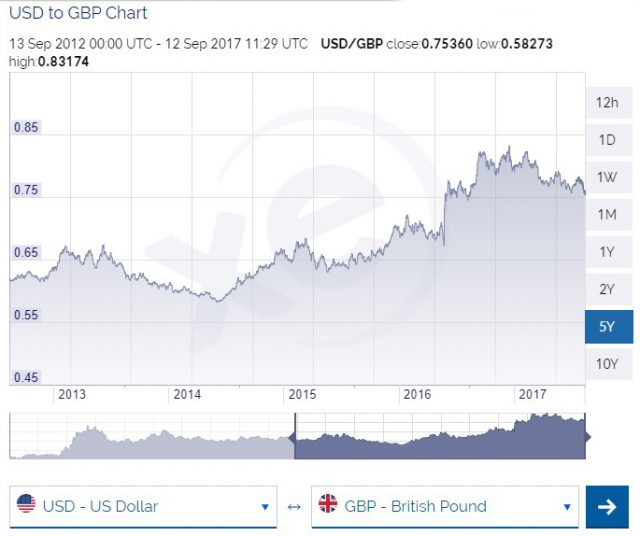 Whichever way you look at this five year chart, you can’t escape the conclusion that the US dollar bottomed against the pound in July 2014, before moving ahead again late 2015, taking off post-Brexit referendum.

Some might argue that the movements these charts illustrate are related.

It would have been a perfect set had the euro/GBP chart towed the line, and of course it doesn’t, but it does the next best thing. The second leg of its “double bottom” occurred at the end of November 2015, matching almost to the day the date at which the Liv-ex 100 finally took off (27 November), and echoing the above-mentioned strengthening of the US dollar. 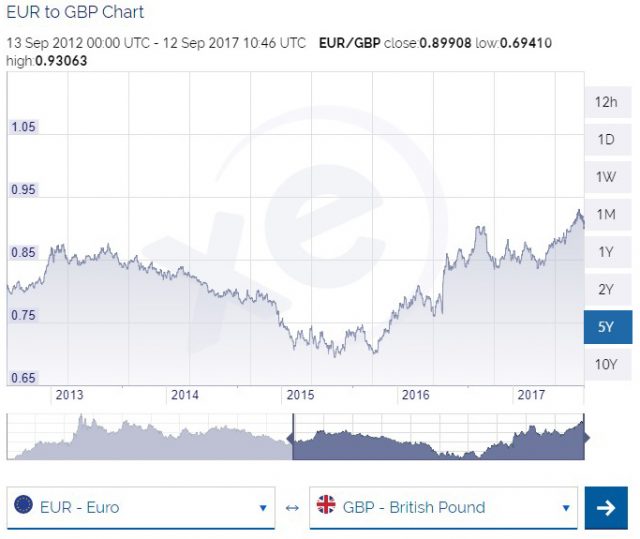 I think we can therefore support the accepted wisdom that a weaker pound has done wonders for the fine wine market, even if we may argue that the market was primed for such a move and the currency movement was the catalyst rather than the sole cause.

Rather than fret about future currency market direction, it seems to us at Amphora that we are better off examining opportunities that these past events have created, and to that end have studied price movements since the beginning of 2016 to see what they reveal. If we can find underperformers which also show up well on the algorithm we anticipate that they should do very well catching up the broader market should the current currency environment prevail, while being somewhat more resilient and outperform should the market flag in the face of a Sterling rebound.

As I write, sterling has just hit a one year high against the US dollar on the back of slightly higher than expected inflation numbers suggesting an increase in the likelihood of an interest rate hike next year, so we need to be alert to the threat of an alteration to the existing currency status quo.

We have identified five wines across a range of vintages and regions which are worth a close look right now. In chronological order:

Opus One 2002: This is the least comfortable recommendation simply on availability grounds but it is far and away the best value on the algorithm and trades at a discount to the same scoring 2003 and the slightly inferior 2006. If anyone has any to sell please step this way!

Masseto 2008: Over in Tuscany this wine has only appreciated by 8% since the beginning of last year whilst the Italian sector of the Liv-ex 1000 is up almost 25%, in fact it is cheaper now than it was at the end of 2013, although to be fair that was something of a spike. Having been a brilliant home for those fleeing Bordeaux wines after mid 2011 it has consolidated for nearly four years now and is due another bout of interest. It is second only to the 2010 on Amphora’s proprietary algorithm but the 2010 is up 34% over the period so can hardly be said to have lagged.

Penfolds Grange 2010: 6% up against a rise of 24% in the Rest of the World sector of the Liv-ex 1000, this 99 point-scoring gem is also the pick of the algorithm. There it sits just over £3,500 when other often marginally inferior Grange offerings are only available over £4,000. We have discussed the opportunities the market throws up from time to time with this producer because prices can be quite volatile, but given the price five years ago was £3,800 we believe this offers a lot of protection as well as upside potential.

L’Evangile 2012: Another Pomerol but this time from 2012. Amphora clients who bought the recommended 2008 have enjoyed an over 30% rise this year, one of the best L’Evangile performers, but the 2012 has languished rising a mere 2%. Regular readers will recall our writing about the 2012s recently. They were issued under an overcast sky, obviously, and have done nothing of note since launch, but given the market’s more recent form this now leaves some of them looking attractive. L’Evangile is one such.

Currency movements are an important backdrop to the performance of this market. Fine wine investors should be well aware of this, and be trying to turn events to their advantage. The above wines offer a coherent way of doing so, in our opinion. 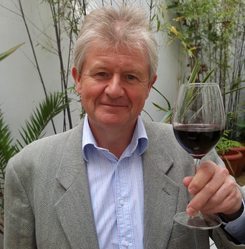