A beer can enthusiast who has amassed a collection of 9,000 receptacles over the past four decades is selling his haul, much to the relief of his long-suffering wife.

Nick West, a retired banker from Somerset, began collecting beer cans in 1975, with every corner of his house now filled with 9,000 cans, with part of it converted into a “beer can library”.

As reported by The Mirror, West is now poised to sell off his collection of historic beer receptacles so he and his wife can downsize.

“My wife and I retired a couple of weeks ago so our income has been dramatically reduced,” he told The Mirror.

“We also want to downsize. Also rather morbidly my wife and kids have zero interest in it and I’m not getting any younger. When I do eventually go I don’t want to leave them with all that to sort through.”

While the specific contents of West’s collection are not known, save for a line of Foster’s cans visible left, it could well be worth a lot more than you might think.

Jeff Lebo is currently using his collection as a tourist attraction, lining the walls of his Brewhouse Mountain Eco Inn in Pennsylvania with beer can paraphernalia and charging guests to sleep in the novelty accommodation. 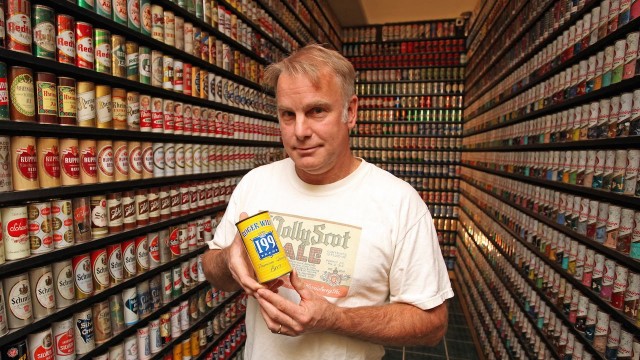