What a busy tasting. Busy but brilliant.

We think it’s fair to say that it delivered on its promise – though with fewer spittoons than we would have liked.

“We’ve seen a lot of changes in the ways in which [Spanish] wines are made,” Wregg said in the lead-up to the event. “Rather than a reliance on oak to age the wine, we see more youthful, exuberant, exciting, energetic natural wines, wines that are less confected, less heavy, less alcoholic.”

Viñateros would not have happened in quite the form it took without the so-called ‘Club Matador Manifesto’ event – a roundtable discussion organised by Telmo Rodriguez in November 2015 at Club Matador in Madrid.

This event sought to take a stand against what some Spanish producers see as the restrictiveness of regulations in many appellations of Spain and to promote the country’s terroir-focused producers. At the event around 150 wine professionals, including producers, journalists and wine merchants, signed a manifesto in defence of terroir.

And the regulatory boards appear to be taking notice – a premium Cava de Paraje category for single-vineyard wines was introduced in 2015, while Rioja is in the process of establishing a new tier of ‘Viñedos Singulares’, essentially a single-vineyard category, for the region.

Viñateros certainly succeeded in showcasing the diversity of Spain’s terroir-focused producers, albeit on a, at times, maddeningly cramped and spittoon-light sixth floor of the Switch House at Tate Modern.

Among the masterclasses, journalist and Spanish wine expert Amaya Cervera presented a compelling exploration of the evolution of the Spanish artisan wine scene over the past 15 years, charting the resurgence of white varieties, the re-establishment of Garnacha as a fine wine grape, and the revival of forgotten terroirs.

In addition, Sarah Jane Evans MW explored how Spanish DOs are adapting to an increasing demand for wines with a sense of place, while Norrel Robertson MW looked at what growers are doing to achieve freshness in Spain’s hot regions.

While db didn’t quite find the elbow room to taste all of the 300-plus wines on pour at Viñateros, we had a damn good go. In the pages that follow we present our highlights – wines which show the diverse talents of Spain’s thriving terroir-focused wine scene. 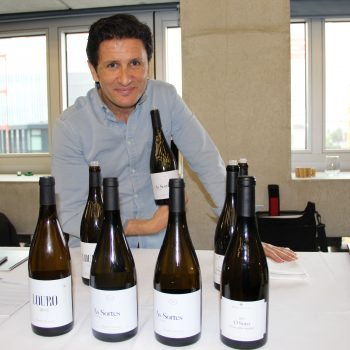 Palacios’s commitment to old-vine Godello and the precious granitic terroir of Valdeorras continues unabated. From his ‘entry-level’ O Bolo to his top level single-vineyard O Soro, his wines possess a Burgundian elegance and concentration that really sets them apart.

At Viñateros, Palacios was pouring a 2016 barrel sample of his brand new Sorte Antiga, a wine made from a 97-year-old vineyard which, he explains, was the progenitor of much of the high-quality Godello being grown in the Valdeorras region today. This wine, already wonderfully complex and concentrated, is set for release in spring 2018. 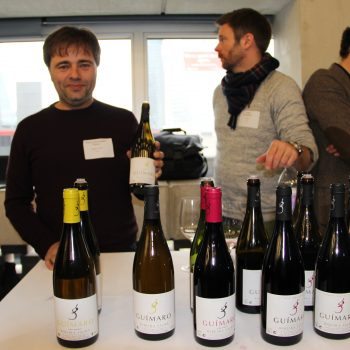 Apparently Guímaro means ‘rebel’ in the local dialect, and if these wines are meant to represent Pérez’s revolt against the industrialisation of wine, mission accomplished. His elegant, structured Mencias are a justification for the excitement around this north-west Spanish variety in themselves.

He works with spontaneous fermentation and old oak, and favours whole-bunch where possible. Incorporating rare local varieties as minor blending elements to his single-vineyard Mencias, he is a winemaker committed to reviving the rich winemaking heritage of the region. 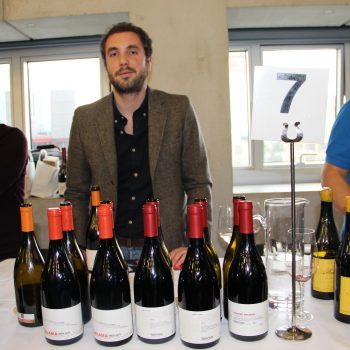 Another producer doing great things with Mencia, but also looking to bring the lesser known red variety Brancellao to the fore.

Dominio do Bibei’s vineyards are on steep slate/schist terraces at altitudes of up to 700m. Grapes are hand harvested and are fed via a gravity system. Fermentation and ageing is in wood and cement. 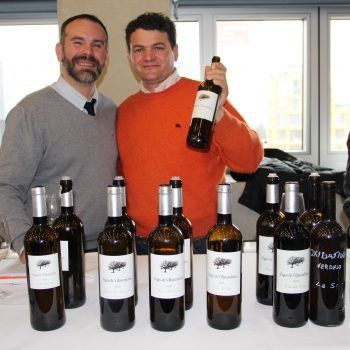 Frustrated by the restrictiveness of the Rueda DOC, Pagos de Villavendimia is a winery very much ploughing its own furrow with a range of single-vineyard Verdejos aged for an unusually long period before release (the current releases are 2011), and including an extraordinary oxidative version from a traditional solera system dating back to 1948.

The estate’s vineyards, principally Camino La Peña, Valrrastrojuelos and Buenavista, for Verdejo (they also produce some Viura), are worked biodynamicallyand most are well over 100 years old. If you think of Verdejo as a tropical-herbaceous Sauvignon Blanc substitute, the wines of Pagos de Villavendimia will make you think very differently. 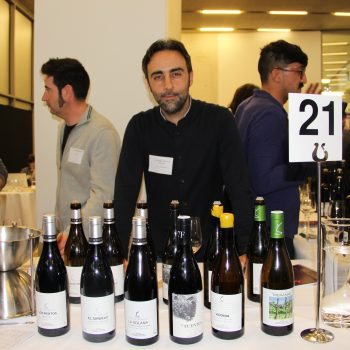 Jonatan Garçía Lima is the owner of Suertes del Marqués in La Oratava, a green and fertile valley on the northern side of the volcanic island of Tenerife.

The family winery has only been making wine since 2006 but has already built up a strong reputation for its distinctive volcanic wines from the region’s native Listan Negro and Listan Blanco grapes.

Producing wines from around 11ha of its own vineyards, plus using grapes from trusted growers – all within the Valle de la Orotava DO – Suertes del Marqués manages to express the volcanic terroir of the region with an emphasis unlike any other winery on the island. 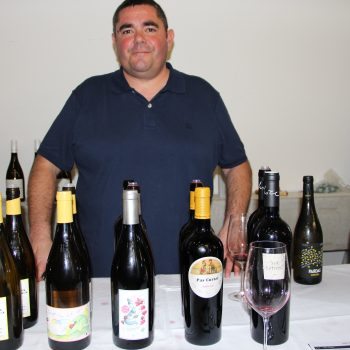 It’s Xarel-lo, Jim, but not as we know it. Irene Alemany, a Catalan, and Laurent Corrio, a Breton, met while making wine in Burgundy. After moving to work in California, the pair were persuaded to return to Alemany’s home town of Vilafranca del Penedès, where her father owned several old and neglected vineyards.

Working organically with very low yields, the pair produced their first wine, Sot Lefriec – an elegant Merlot blend – in 1999, but it’s their Xarel-lo’s that piqued db‘s interest. There are two of them, both single-vineyard bottlings.

The first, Principia Mathematica (we didn’t get a chance to find out whether there was an Isaac Newton connection), is fermented with wild yeasts and aged in untoasted oak barrels. Apricot and citrus fruit, an almondy edge and a buttery richness make this an atypical expression of the grape.

The second, Cargol Treu Vi, has a bit of skin contact and has a very jazzy flavour profile for what can be a disappointingly neutral grape. Fermentation is with wild yeasts in French oak barrels, 50% new, with ageing for 12 months in the same. Apples, pears, smoke, dry flowers and vanilla combine with a salty tint and a long, mineral finish. 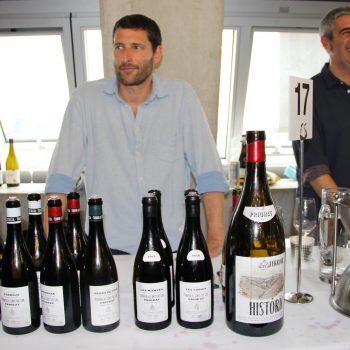 If any one producer exemplifies the Spanish wine revolution towards fresh, terroir-focused wines, it’s Dominik Huber of Terroir Al Limit in Priorat.

Sites are worked biodynamically and wood influence is almost completely shunned, with fermentation and ageing done in unlined concrete and 1,800l mature oak. The wines, in terms of their elegance, subtle power and ageability are outstanding. 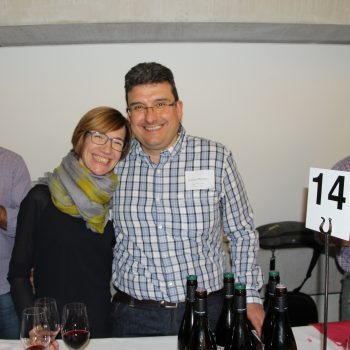 Enrique Basarte and Elisa Ucar, the dynamic husband and wife team at Domaines Lupier, nurtured their love of Garnacha by acquiring old-vine 27 parcels in the northern hills of Navarra, around the village of San Martín de Unx. This was in 2006, with their first vintage taking place in 2008.

Their vineyards are planted at altitudes ranging from 400-700m above sea level, with vines between 69 and 113 years old, according to the charming, almost superhumanly enthusiastic Elisa.

The duo work biodynamically – even eschewing copper in favour of herbal preparations such as yarrow. Only old oak is used, never new for Domaines Lupiers’ two wines – El Terroir, “facing the earth”, and La Dama, “facing the sky”. Although the two wines are blended based on blind tastings of the 27 parcels, all of which are vinified separately, every year, the two wines seem to possess the same character, Elisa explains.

Some of the most remarkable Garnachas being produced in Spain right now.