Veuve Clicquot has unveiled a limited edition gift box of its rosé Champagne that allows consumers to pre-record a voicemail message which will play upon opening the box. 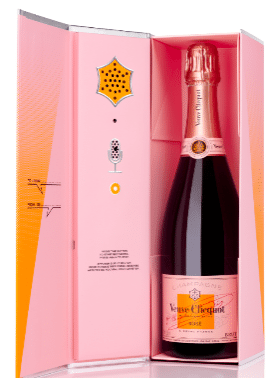 Named ‘Clicq’call’, the customisable gift box has been released ahead of Valentine’s and Mother’s Day, when sales of pink fizz traditionally receive a boost. Those purchasing the gift set will be able to record a message captured by voice recording equipment concealed within the box, and have that message played to the recipient upon opening the gift box.

Madame Clicquot was the first Champagne producer to break away from the tradition of adding an elderberry-based preparation to create blended Rosé Champagne in 1818 when she blended some of her Bouzy red wines with her NV cuvée to make the first ‘Rosé d’Assemblage’.

Based on its Brut Yellow Label’s traditional blend, its rosé Champagne is made from a blend of Pinot Noir, Meunier and Chardonnay, a proportion of reserve wines sourced from several harvests, some of which are nine years old, and finished with red wine.

The Clicq’call gift box will be available to buy from select department stores and e-tailers, including Selfridges, at an RRP of £59.99.