The following extract is taken from ‘Volcanic Wines – Salt, Grit and Power‘ by John Szabo MS. Published by Jacqui Small Publishing it is one of the books shortlisted in this year’s André Simon Awards. The awards ceremony is being held tonight at The Goring Hotel. 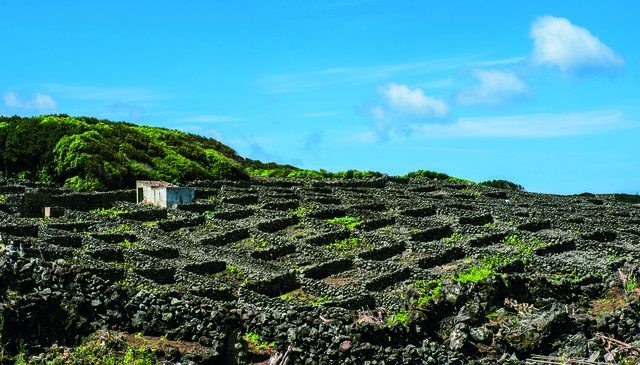 When I arrive on the island I’m met by Paulo Mendonça, the president of the cooperative winery of Biscoitos, the island’s largest and only really export-equipped winery, and the winemaker Nuno Costa. During the short drive to the village, I see no vines. Mendonça, noticing my disappointment, admits that grapegrowing is not a priority on Terceira. ‘But just wait,’ he says. And when we reach Biscoitos, I catch a first glimpse of some of the strangest vineyards I’ve ever seen.

It’s only a small area, but one of the most singular vineyard landscapes on the planet. On the gently rolling hills beneath the village is the most amazingly geometric, chessboard-like pattern of squared-off, dry stonewalls fashioned out of lumpy basalt rocks, each surrounding a few wild-looking, bushy vines. ‘These are the curraletas,’ Mendonça announces, without disguising his pride.

Literally ‘little corrals’ these enclosures protect the vines from the buffeting winds and salty sea spray of the Atlantic, with the added advantage of absorbing and radiating heat back to the vines, a necessary ripening aid in this rather cool maritime climate. ‘The size of the curraletas is determined by the quality of the ground,’ Mendonça continues. ‘The poorer the ground, the smaller the curraleta.’

The land around Biscoitos is desperately poor. Indeed, there’s virtually no soil, just crushed rock. How do vines survive, I wonder. It’s like growing a plant in a jar of pebbles. Even when it rains, there’s nothing to hold the water.

The answer lies beneath, in the deep root system of the vines and in the volcanic geology of the island. Successive lava flows created laminate-like strata of rock between which water runs. The hills above Biscoitos are covered with sponge-like sphagnum moss that absorbs up to ten times its weight in water, which is then released slowly into the ground, trickling down and then flowing between the sheets of lava, eventually reaching the vineyards where deeply rooted vines have plunged their roots in desperate search of moisture. It’s like natural underground irrigation.

The André Simon Awards were founded in 1978 to recognise the achievements of food and drink writers. It is the longest running award of its kind. Previous winners have included: Elizabeth David and Rosemary Hume (the very first winners), Michel Roux, Hugh Fearnley-Whittingstall, Nigel Slater and Rick Stein. Last year’s drinks book winner was Suzanne Mustachich for ‘Thirsty Dragon’. The awards website can be found here.