Hockney is the latest in a long line of artists to create an original work for the château, which has commissioned avant-garde artists to design its labels since 1945.

The 79-year-old Bradford born painter, a friend of the late Baroness Philippine de Rothschild, has depicted a pair of wine glasses haloed by white lines “signifying emotion and wonder”. 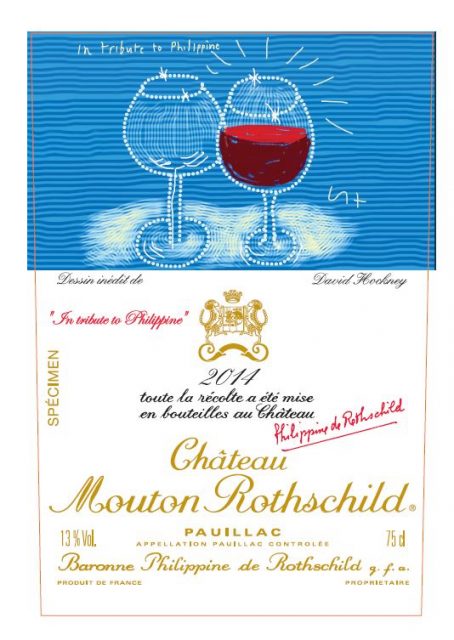 One of the glasses, formed of a series of white dots, is full and the other is empty, which, according to the château, “tells the story of feverish expectation and the constantly renewed miracle of the birth of a great wine”.

Influenced by Pop Art and a master of modern techniques, from acrylics to the iPad, Hockney falls within the figurative tradition, and is known for his landscapes and portraits in eye-poppingly bright contrasting colours.

The Royal Academy recently put on an exhibition of 82 portrait paintings by Hockney, who is considered one of Britain’s greatest living artists.

In his artwork for the Mouton label, Hockney pays tribute the château’s former owner Baroness Philippine, a great art lover who died in 2014.

A Royal College of Art graduate, Hockney got swept up in the pop art movement while living in the US, where he made friends with Andy Warhol, settling in LA in 1966.

He became famous for his paintings of swimming pools in which the human presence is redolent with an atmosphere of ambiguous sensuality.

Next year a retrospective of his work will be put on in London, Paris and New York.

Among the other artists to have created a label for Mouton Rothschild are Pablo Picasso, Salvador Dalí, Georges Braque, Juan Miró, Andy Warhol, Francis Bacon, Jeff Koons and Lucian Freud.