Who moves the market?

Liv-ex has taken a look at four prominent critics to see whose scores have the power to move prices. 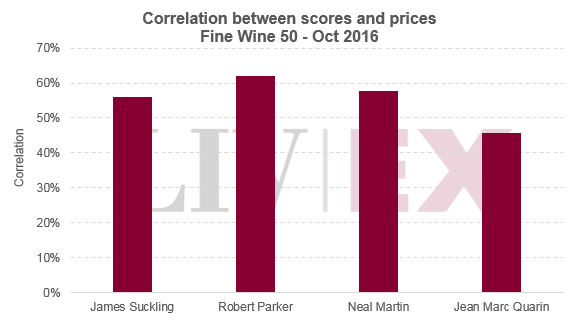 Since Robert Parker’s retirement from the field of truly active tasting and scoring in The Wine Advocate earlier this year, the question occasionally posited has been ‘who is Parker’s “heir”?’

As Liv-ex asked in its latest blog post: “Will there be an heir to Parker’s throne, or will a system based on consensus or average scores emerge as the market’s new barometer of wine quality in Bordeaux?”

Taking a look at the issue, Liv-ex has sought to measure the correlation between the scores of four critics; Robert Parker, James Suckling, Neal Martin and Jean-Marc Quarin, on the prices of the last 10 physical vintages of the Bordeaux first growths.

As Liv-ex research analyst, Greg Smart, told the drinks business: “The chart shows a statistical measure known as ‘R-squared’ or the ‘coefficient of determination’. The left hand axis shows the percentage of total variation in price that can be attributed to variations in individual critic scores.

“It suggests that Parker scores still have more influence on prices than other critics. However, this might change over time following Parker’s retirement. There are a number of caveats including the direction of causation (i.e. scores might also be influenced by prices) and critic scores may be correlated with each other.”

The fact that Parker, continues to hold the greatest sway is perhaps unsurprising. Despite his retirement earlier this year his scores and opinion still have the power to move the labels he touches upon. A case in point would be the 2009 Pape Clement which was given 100-points in a Hedonist Gazette article this April and since then has climbed 64% to a new high of £1,335 a case.

There is also the question of whether those wines given 100-points by Parker prior to his retirement – principally those of Bordeaux – could attain greater ‘cult’ or ‘collectible’ status now that Parker is unlikely to raise anymore labels to such a level.

But Liv-ex’s little examination was also interesting in that it showed the other critics, especially Martin and Suckling, were not far behind in the influence stakes.

Liv-ex concluded that critics were but one factor in many that determines the course of a wine’s progress in the market – others being age and brand and vintage quality.

The wait – and the search – for the next market influencer goes on.