Giant corkscrew on sale at Christie’s for £25k

A self-pouring wine machine and corkscrew made from 300 pieces of scrap metal is to go on sale at Christie’s for £25,000. 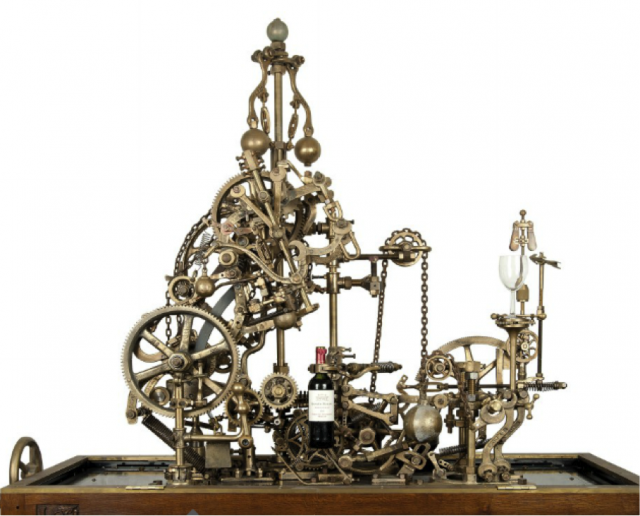 The enormous mechanical corkscrew and self-pouring wine machine was built by Rob Higgs in 2006 from scrap metal and items including drills, spanners, cannon balls and clock springs.

Weighing half a ton, the contraption’s sole purpose is to uncork and pour a bottle of wine at the turn of a handle. When moving, the mechanical corkscrew will lift and tilt a full-sized wine bottle to pour its contents into a glass, without spilling.

At the time of its creation, the machine was paraded on The One Show and the then Stephen Fry’s Gadget Man, with its creator describing the giant bottle opener as “completely excessive”.

An artist, Higgs said his creation was a “statement on the over industrialised society we live in with all the bells and whistles.”

Several machines have since been made and sold by Higgs, however the original bronze prototype is now set to go under the hammer at Christie’s, accompanied by a leather-bound book signed by celebrities such as Bono and Damon Hill who attended its launch party in Monaco.

It will be sold at Christie’s Out of the Ordinary sale, the fourth annual auction of unusual memorabilia and eccentric ephemera, on 14 September. It is estimated to be sold for between £15,000 to £25,000.

Watch the video below to see it in operation.